Follows up on John Kerry’s threat so stand aside and leave Israel to the international mob. 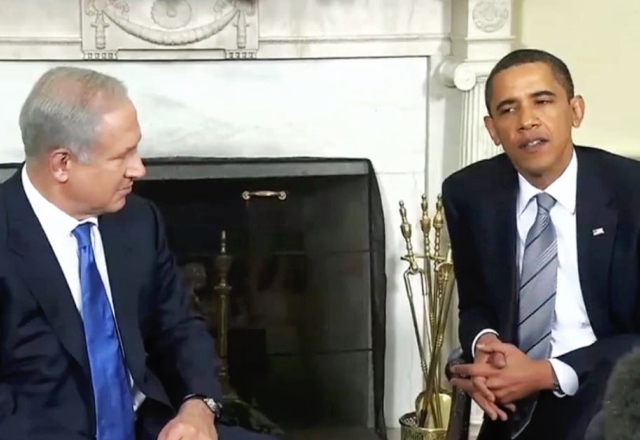 Jeffrey Goldberg has carved out what for a journalist covering the Middle East is an enviable niche — vigorously pro-Israel yet not anti-Obama.

When Bibi Netanyahu lectured Obama on the Middle East in a White House press conference in 2011, Goldberg leapt to Obama’s defense with the following declaration:

That niche is why Goldberg landed an interview with Obama on the eve of Netanyahu’s visit to the White House, detailed in Goldberg’s column today, Obama to Israel — Time Is Running Out.

The interview is best described as preparing the public for what is to come: The Obama administration twisting Bibi’s arm off as to John Kerry’s “framework” under the threat of the U.S. stepping aside from defending Israel against the worldwide, decades-long lawfare and boycott movement.

It’s the same threat John Kerry made several weeks ago, but now it’s coming from Obama’s own lips, as Goldberg noted (emphasis added):

On the subject of Middle East peace, Obama told me that the U.S.’s friendship with Israel is undying, but he also issued what I took to be a veiled threat: The U.S., though willing to defend an isolated Israel at the United Nations and in other international bodies, might soon be unable to do so effectively.

“If you see no peace deal and continued aggressive settlement construction — and we have seen more aggressive settlement construction over the last couple years than we’ve seen in a very long time,” Obama said. “If Palestinians come to believe that the possibility of a contiguous sovereign Palestinian state is no longer within reach, then our ability to manage the international fallout is going to be limited.”

For Goldberg to characterize Obama’s statement as a “veiled threat” is pretty significant.

To me, it wasn’t a veiled threat, it was just a threat.

We’ve explored this issue here repeatedly over the years — The only thing that can seriously damage Israel is a U.S. president who steps aside and lets the international mob have its way at the U.N. and elsewhere.

The reasoning behind Obama’s threat is weak. The threat of standing aside suggests that the choice Israel faces is between continuing control of the West Bank and peace. But there is no such choice now, or at any time in the past.

If the choice is between further international isolation, and a Hamas / Islamic Jihad / al-Aqsa Martyrs Brigade run nation just a few miles from Ben Gurion Airport and Tel Aviv, then the choice is clear.

By making these threats in public, Obama and Kerry create self-fulfilling prophecies and encourage the Palestinians to believe they will achieve more from international boycotts and pressure than through negotiations.

If Obama and Kerry wanted to encourage Palestinian compromise, they would do the opposite of what they are doing; they would announce that no matter what happens, the U.S. will stand by Israel internationally and will prevail at the U.N. and elsewhere in defense of Israel.

That would disabuse the Palestinians of their goal of pocketing whatever concessions they can get through negotiations and then moving on to Plan B, international pressure.

There is no reason to think that these threats are needed for Israeli compromise. The history of Middle East negotiations — whether at Camp David or elsewhere — is Israel trying to relinquish control of 90% plus of the West Bank in exchange for true peace and security.

Getting to a Palestinian “Yes” has proven elusive, even when Ehud Olmert offered a deal the Palestinians never will see again:

“He (Abbas) promised me the next day his adviser would come. But the next day Saeb Erekat rang my adviser and said we forgot we are going to Amman today, let’s make it next week. I never saw him again.”

Olmert believes that, like Camp David a decade earlier, this was an enormous opportunity lost: “I said `this is the offer. Sign it and we can immediately get support from America, from Europe, from all over the world’. I told him (Abbas) he’d never get anything like this again from an Israeli leader for 50 years. I said to him, `do you want to keep floating forever – like an astronaut in space – or do you want a state?’ …

Maybe there will be a choice in which peace is one of the options at some point. But that option is not yet present because the Palestinians and Arab world do not truly accept the presence of a Jewish national entity in the heart of the Islamic world.

So long as a peace agreement is viewed by Palestinians as a stepping stone to the destruction of Israel as a Jewish state, there will be no peace and any Israeli leader would be a fool to sign such an agreement.

Related: Where have you gone, Daniel Patrick Moynihan.

Update: John Podhoretz has a good analysis of Obama’s interview, The President’s Prophetic Threats to Israel:

The wild logical contradictions in his remarks expose the degree to which the American approach in the Kerry peace talks is to haunt Israel with the dire nightmare it will face should the talks fail; Palestinian rejectionism plays almost no role in the Obaman calculus here.

The timing could not have been any more deliberate — an assault on the prime minister’s policies delivered precisely as Netanyahu was flying in to meet with him, and on the first day, too, of the pro-Israel lobby AIPAC’s annual tour de force conference across town.

At the very least, that might be considered bad manners, poor diplomatic protocol, a resounding preemptive slap in the face: I’ve just told the world you’re leading your country to wrack and ruin, Mr. Prime Minister. Now, what was it you wanted to talk to me about?

More substantively, the president’s comments reinforce years of grievance that have accumulated in Netanyahu’s circles and some distance beyond, to the effect that the president ignores the inconsistencies, duplicities and worse of the Palestinian Authority and its leader Mahmoud Abbas, while placing exaggerated blame for the failure of peace efforts at the door of the Israeli government….

For one thing is certain, the president’s resort to a newspaper interview on the eve of their talks to issue near-apocalyptic warnings about the disaster Netanyahu risks bringing upon Israel is just about the last thing likely to bolster the prime minister’s confidence in their alliance, and just about the last thing likely to encourage Netanyahu to further alienate his hawkish home base by taking steps such as halting building outside the settlement blocs.

The Disney president can’t stand up to a real threat, so in the true form of cowardice he is threatening our allies.

I’d pay every dollar I have to see Bibi put Obama in a headlock on live TV and give him the noogies he so dearly deserves. Forced to choose between Bibi and Bam Bam, I do believe America would go with Bibi, without hesitation.

I’d pay to see that on Pay-Per-View

I tell myself that it is not un-American to hope that obama, the america destroying president, is repeatedly humiliated on all fronts. Maybe, at some point, a politician will arise on the right who can galvanize the widespread disgust with obama.

Mr. POTUS is a local, community guy. He’s way behind in world history and it’s obviously a subject that’s not front burner for him. Just watch him trip and stumble into the Dead Sea.

If Israel cannot rely upon support from the United States, no country can. It is that simple. There are no nuances here.

The last of the emperor’s clothes were removed this week end.

Let us know how your IRS audit goes, JP! 😉

Another proof, if needed, of how well BHO’s got Israel’s back. Didn’t he say that at an AIPAC Conference a couple of years back? Is he going to repeat it this year? Probably not: too busy reassuring Putin, as someone put it somewhere,that if the Russian dictator likes Crimea and wants to keep Crimea, he can keep Crimea. Period.

Ah, yes, at last the “we can’t or won’t protect Israel anymore” card. We always knew he wanted to play it. We know he despises Israel.

Obama and his cohort want the end of Israel. Whether through regional chaos and disintegration or an Iranian-driven conflagration. It’s what they want. It’s why the Khalidi tape will never be released — because that’s what was said at the dinner.

I wish Netanyahu were not coming here so he does not have to be treated like crap by the amateur in chief. It is so obvious that Obama despises him that no visit here will do any good for Israel. Netanyahu should remember that Obama has no credibility with both our friends and enemies throughout the world and he should play “rope-a- dope” with the big eared dope until 2016.

The Palestinians don’t care that they missed an opportunity.

They don’t, and never HAVE, wanted peace. They want Israel wiped off the map.

‘Peace’ for them is when they win. The long line of US Presidents and SecStates that think they can finally make them see the light are nothing more than naive idiots that can be taken advantage of to the Palestinians.

Obama has lost the middle and only his base remains – and even they are abandoning him. Knee-capping Israel is one of the few remaining ways he can please his base. Obama’s strongest asset is his consistency. We know he’ll hurt Americans to serve his personal political needs. Now we know he’ll do the same with foreign policy.

Hummm, Ok, I’m waiting for Obama’s staunch sycophants to insist that he didn’t mean what he said, that “we’re” misunderstanding him.

Heck, people need to recall, clearly, that Obama has said from the start that his mission was to “radically transform” this country. He’s been doing so every day of his presidency since January 20, 2009.

Obama’s ACA is going to start the process of bankrupting the country internally, dis-spiriting its citizens, plus he’s stripping our military of its strength and weakening its capabilities, plus showing our once allies that the USA will abandon them at the earliest possible opportunity, while providing a clear financial haven for his family and his cohorts.

If Obama leaves office on January 20, 2017, with our country broken, beat down, its citizens demoralized and our enemies threatening us on multiple fronts, then Obama will feel that his job has been successful.

1054 days to go of the Sissyboy McStompypants Presidency.

Pray for us all.

What did Jeremiah Wright pray? “G-d damn Obama! That’s in the Bible.”

Someone please explain to me how American Jews can still support Obama??

I just don’t see how publicly undercutting Israel is a good strategy. What good does it do?

If you’re Obama, it helps you with your radically liberal base, you know, the pro-BDS crowd.

From what I have read, Israel has a supply of “armaments” that can do very serious damage to adversaries. O’s comments and our SoS, Kerry may have given Israel the diplomatic freedom to answer attacks by their enemies “without” having to go thru current US kiss-ass channels.