More evidence it’s not about land for peace in Israel

More evidence it’s not about land for peace in Israel

An article today at The Tower discloses a rough, handdrawn map allegedly by Mahmoud Abbas, refecting a peace offer extended by Ehud Olmert when he was Prime Minister of Israel, EXCLUSIVE: The Deal the Palestinians Rejected, The History That Was Never Made:

In a stunning development that calls into question the basic willingness of Palestinian President Mahmoud Abbas to accept any peace agreement with the Jewish state, TheTower.org has obtained a hand-drawn map created by Abbas documenting a 2008 peace proposal outlined to him by then-Israeli Prime Minister Ehud Olmert – which Abbas rebuffed – and has confirmed the existence and details of the settlement offer in an exclusive interview with Olmert.

Given the chaos sweeping the Middle East since the September 2008 offer was rejected by Abbas, and the security deterioration on multiple Israeli borders, Olmert’s offer contains elements likely to be seen as essentially incompatible with Israel’s fundamental security requirements….

With remarkable candor, Olmert says that under his plan, Israel would have agreed to swap areas on Israel’s side of the Green Line, while Israel would have retained key communities built after Israel’s victory in 1967. The Israeli territory to be ceded would have been near Afula and Beit She’an in the country’s north, an area north of Jerusalem and in the Judean Desert, in the Lachish region, and adjacent to the Gaza Strip. An underground tunnel would have connected Gaza and the West Bank.

Olmert also shares details about his approach, under which no nation would have asserted complete sovereignty over what is known as the Holy Basin. Instead a five-member group would have overseen the areas including Jerusalem’s Old City, the Mount of Olives, and the City of David, just beyond the Old City walls. Ehud Barak had agreed in principle to cede sovereignty over the area during the 2000 Camp David Summit. 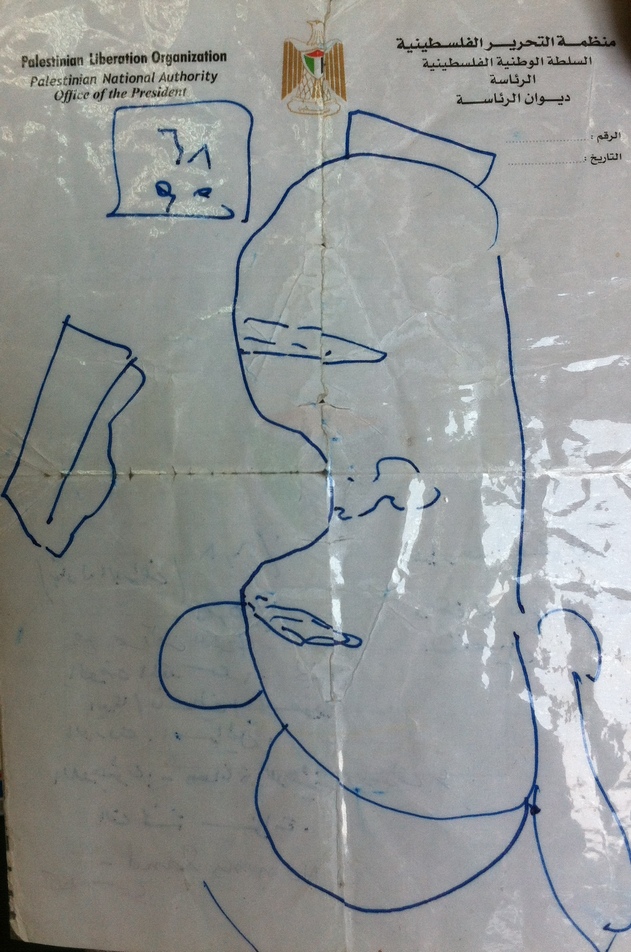 The handwritten map may be new, but the story is old.

I addressed this Olmert offer in the context of Obama’s statement in May 2011 that Israel return to the pre-1967 (1949 armistice) borders, `do you want to keep floating forever – like an astronaut in space – or do you want a state?’:

But the key thing is that the Palestinians, including Mahmoud Abbas (Abu Mazen), walked away from what Olmert told them was the best deal they would ever get and one they would not see again for another 50 years:

“He (Abbas) promised me the next day his adviser would come. But the next day Saeb Erekat rang my adviser and said we forgot we are going to Amman today, let’s make it next week. I never saw him again.”Olmert believes that, like Camp David a decade earlier, this was an enormous opportunity lost: “I said `this is the offer. Sign it and we can immediately get support from America, from Europe, from all over the world’. I told him (Abbas) he’d never get anything like this again from an Israeli leader for 50 years. I said to him, `do you want to keep floating forever – like an astronaut in space – or do you want a state?’ …

So rather than proving the wisdom of Obama’s Middle East speech, this history proves the essential misunderstanding of the problem. Putting the 1967 borders on the table as the starting point with no other concessions emboldens the Palestinians to wait, because the deal will get better.

The problem is not that Israel is not willing to trade land for peace — even more land than anyone is willing to say in public — it is that the Palestinians want the land but not the peace.

Who knows if Olmert could have accomplished this deal if Abbas had accepted.  The deal Olmert offered was insane from an Israeli perspective — but it tested whether there was a real peace partner on the other side. There wasn’t. Abbas and the Palestinian leadership walked away.

It’s always been about the refusal to accept Israel as a Jewish state.

When the Palestinians embrace people like Columbia University Professor Joseph Massad, with his theories that the Holocaust was a Zionist-Nazi collaboration, and the BDS movement embraces Islamists and other Jew haters, and there is anti-Jewish incitement in the Palestinian press, the refusal to accept Israel becomes an intellectual foundation of the Palestinian negotiating position from which Palestinian leaders dare not deviate.

The same people who believe Obama on this, believe Boxer on global warming.

It’s not just the rejection, it’s the fact that the Israelis offered the Palestinians about as much as they could rationally hope for, and they didn’t even agree to start negotiating from there; they simply rejected it.

As to proof that the Palestinians aren’t interested in peace with Israel and what they want is peace without Israel, it takes a willful effort not to see that already. It used to be that the Palis would whisper soft and conciliatory words into the willing ears of western journalists and diplomats but in Arabic continue with bloodcurdling threats and positions.

But after the first UN statehood move in 2011, even that’s no longer true. From Abbas on down they insist that any agreement with Israel would only be the first step towards the goal of eliminating Israel. They say this often, clearly, and directly. The only way to rationalize this as anything other than what it is–and this is what the rest of the world does–is to assume that the Arabs don’t mean everything they say and do.

In a culture where a man murders two children before their parents’ eyes, then murders the parents, and goes back later to finish by killing the baby, and is then lionized and commemorated–this is not a culture ready for or interested in peace.

maybe Olmert confused it for a cyclops Mr. Potato

It is also an agreement to commit genocide.

How do you negotiate with people who are committed to your death and destruction?

The time for, “Land for peace,” is way passed any usefulness.

OTOH, I think that the Israeli’s missed a good opportunity and dozen or so years ago by not considering the Saudi proposal which I believe could have been enforced by international peacekeepers.

But it’s way too late now..