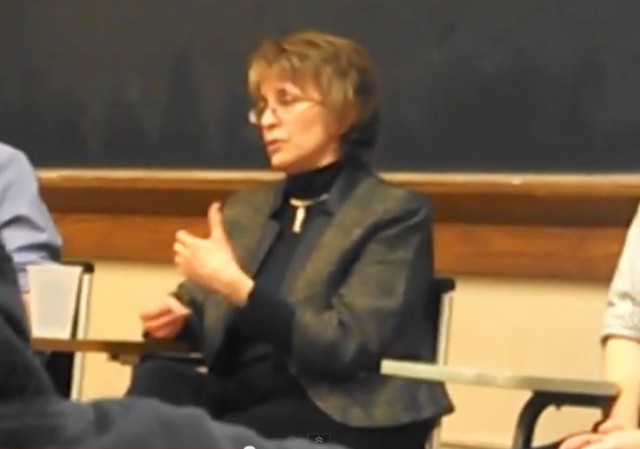 Martha Robertson is the Emily’s List-backed, DCCC “Red to Blue” candidate in my home district of NY-23. She is challenging Republican Tom Reed.

Robertson is a long-time, strong supporter of single payer. For years she appeared at public events arguing for single payer. She even advocated for Obamacare as a stepping stone, saying “we’ll get to single payer soon.”

During the campaign, however, Robertson has backed away from single-payer, focusing on implementing Obamacare.

Now that Obamacare’s deep problems are known, and other Democratic politicians are running from it, Robertson is standing firm.

At a recent public event held at Cornell, Robertson reiterated that her goal was to “fix” Obamacare. That was Alex Sink’s strategy in Florida District 13 recently, and it flopped.

Among the points Robertson argued is that Republicans actively sabotaged Obamacare’s rollout by underfunding the healthcare.gov website.

But we know, as reported widely, that the website problems were not for lack of funding. In fact, hundreds of millions of dollars were spent on the website.

Rather, it was a lack of competent planning compounded by delays in rulemaking, so that the nature of Obamcare would be concealed from the public prior to the 2012 election.

Rather than sabotage by Republicans, the healthcare.gov debacle was sabotaged by Obama’s reelection plans. Robertson doesn’t seem to understand this.

Here’s is part of Robertson’s answer where she responded to a student question about her position on Obamacare and single-payer. Time will tell if her run towards, not away, from Obamacare works:

“House of Representatives refused to put in the kind of money that would help Human Services department needed to be able to run the website, to set up the program”

Welcome to the new Democratic party line for the November election: “Fix ObamaCare”.

It’s going to have some legs: a fair number of the public, from the polls I’ve seen, support “fixing” the ACA. Those folks apparently do not realize that the ACA can’t be fixed and in fact was never designed to work well in the first place.

But the Dems hope that the promise to “fix” the ACA will get them two things: first, a continued mantle of ‘reform’, which is what progressives claim to be, reformers, and second, a defusing of the issue long enough to get past the election. Come January the elected Dems will promptly renege on any sort of “fix” that you and I would recognize, and instead encourage ‘reforms’ that carry us further down the road to single payer and progressive socialism.

That would be some “fix” alright.

“We need to see how far we can take this.”

Oh, honey, that’s as far as you get, right there.

Now it’s time to start reversing this thing, burning it down to the roots.

Like the tax code in its present form (HA! The Blob had more form.) there is no “fixing” this. It has to be, like the tax code, started from a clean sheet of paper, and designed to do the LEAST…not the most.

“I may not agree with what you say, but I’ll defend to your untimely death your right to ObamaCare.”

—Martha Robertson, as quoted by Mufson and Eilperin in the Washington Post.

Just like her BS about being ‘hacked’ by GOP operatives, she doesn’t care what the truth is.

All she cares about is a sound byte she can put in ads for the low information voter that will hear it and bitch about the ‘obstructionist GOP’.

After all, there Democrats rarely face consequences for telling blatant lies.

Reed needs to get out there and call her on her lies at every opportunity.

When will Americans rebel against the liberal-progressive refrain that every government failure was caused by not enough government spending?

While bubble economics feel good in the short term, they will cause a progressive distortion of the market, and will eventually lose integrity then burst. Obamacare is the latest effort at bubble economics, that when it bursts will eclipse the failures of bubble real estate, bubble education, bubble welfare, etc. Left-wing economics are not sustainable, and sponsor general corruption. Right-wing economics threaten to immobilize capital, and sponsor exceptional corruption.

She even advocated for Obamacare as a stepping stone, saying “we’ll get to single payer soon.”

She is exactly right, in that that is what will happen.

From Day One, Obamacare was designed to fail ( not just the website, but the entire system), and to ‘fail in steps’, such that by the time it is finally RECOGNIZED as a complete failure, it will be so embedded in the system, the only way out will be ‘single payer’.

The government has decided ‘who shall have health insurance’ – IE ‘everyone, even if we have to let them pay $ 35 a month for a policy that the person next door pays $ 600 a month for, we’ll pretend that they’re the same cost’.

They have decided how much to tax us for it (and it IS a tax, make no mistake), and the starting figure is 10 % (on a floating graduated system of wealth redistribution called ‘subsidies’).

They have decided, and will continue to decide, what is covered, what is not, and even some things that shall be ‘free’ (birth control, whatever) with no deductible, no copay, etc.

They have instituted complete government reporting of every medical action, no matter how small or how (used to be) private, via the new coding system.

For now, they let the insurance companies handle the paperwork. Getting rid of them comes later.

The D’s had a rare opportunity to achieve one of their dearest goals. They pulled out every trick in the book, they bent or broke very rule of Congress that might be in the way to do it, the R’s failed to stop it, and now it’s done.

It’s not done. It’s a tax – according to Roberts – and that’s the secret to undoing it.

It can be defunded piece by piece or the whole thing at once. Will the bill be vetoed by Obama? Yes. But rinse and repeat. Do it again and let Obama veto it again.

That was the Republicans can Obamacare the 2016 elections: vote for a candidate who will not veto the congressional bill.

This can be overturned and it must be.

A side note. When I went to this blog site an advertisement started playing. I immediately muted the sound. I will not listen to those ads, and if I happen to notice what product is being pushed at me, I will not buy it.

Which is your prerogative…to mute OR contribute a donation so fewer sponsors are needed to support this website and disturb your enjoyment.

District 23 in NY has been nailed as being in the top 15 most highly contentious contests in the upcoming mid-terms. Robertson already has been selected by a following in D.C. with national endorsement and backing from the liberal PAC’s. Rep. Tom Reed has outdistanced his prior campaign fund raising as of Jan. for the upcoming mid-terms but will need to have a higher level of funding within his district in order to make his positions clear and to check-mate Martha Robinsons agenda across the 23rds 10 counties. Getting out the videos and messages which Prof. Jacobson brings to this blog in a public campaign message would be an enlightenment to voters. Supporters who want to see the continuation of keeping District 23rd red need to act now and help keep the effort going forward to November. A Republican Congress is as crucial as will be taking the Senate majority.

I was on the HealthCare.gov site a couple of days ago, and while it may have improved, it is still quite marginal, with hundreds of millions of dollars already having been spent. Created a profile, deleted it, created another one, and then couldn’t get to selecting a policy because I had two profiles. Heard about this problem in October, and it is still there. And, if you have to document your income to get a subsidy, you apparently have to mail it to the Feds – even though the documentation I need to mail comes from another federal govt. site (ssa.gov). And, then, they will call you back. Maybe. Eventually. And, despite instructions on the type of documents that they can accept (pdf, png, etc), there is no way to upload them.

That was all after moving to a second computer. On the first one, Healthcare.gov wouldn’t fully authenticate using Firefox, and took several minutes to click each box in IE – something that should have been done at a much lower level. Then, on the second computer, Firefox was diagnosed as not having Flash (it does), but IE wouldn’t download eligibility docs. So, I toggled between the two of them to get things done. This was over five months after many of these problems had been first diagnosed. And, after hundreds of millions of dollars had been spent.

At least I am not living in Oregon, where the web site still apparently isn’t working, despite many millions of fed dollars having been spent.

No – it isn’t a problem of not enough money, but rather, a question of a lot of money having been squandered, and is continued to be squandered, for political and crony capital reasons. Let anyone forget, the prime contractor on the HealthCare.gov site, despite having well published web site failures in its past, was likely selected because of an executive’s close relationship to Michelle Obama.

Why does this woman think that throwing more money at the problem will solve it, and not make things worse? Why does she think that big government projects can ever work? What is the basis for this belief of hers? Does she point to successful large government projects and programs? Or, is it more likely that this is all wishful thinking on her part, little different than believing in leprechauns and unicorns?

If Obamacare was created to fail (and it may have been) in order to open the door to single payer, Robertson’s favored outcome, it should backfire. People are now seeing that the government is incapable of handling even Obamacare, much as it failed with Katrina relief, and despite millions of dollars spent so far on Obamacare. Having seen this failure, does Robertson really think the American public will actually embrace a single payer national health service putting all of health care in government’s proven to be incompetent hands? No wonder she runs away from that to “fix it”.

As long as Republicans control at least the House, what are the odds of single payer seeing the light of day?

Robertson’s “fix it” stance now is convenient, perhaps in the hope that she can fool the people of the western southern tier outside Tompkins County into thinking she is a “moderate”.

Her record shows her goal is clearly single payer, whatever she says now in the hope low information voters will believe the same Robertson who, with no evidence, and to raise money, claimed “Republican operatives” had hacked her website. Pinocchio’s fables gave him a long nose, too bad Robertson is not subject to the same process.

I suppose the answer to your question depends on whether Boehner remains Speaker of the House.