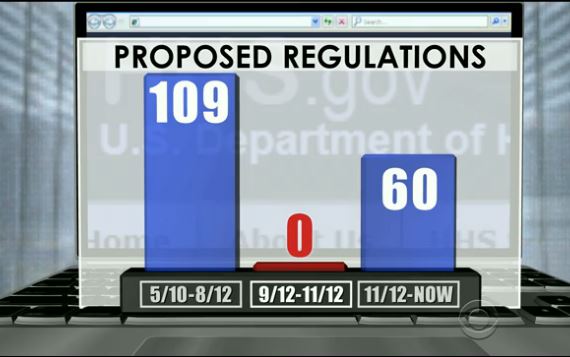 CBS News has been digging into the cause of the delays in preparing the website for the government’s health insurance market and has learned was a major interruption in the months before President Obama’s re-election. At the height of the 2012 presidential election campaign, it was crunch time for the Obama administration to release key instructions so contractors could work toward the October 2013 deadline.

But a Health and Human Services official who was closely involved tells CBS News that in late summer, the administration stopped issuing proposed rules for the Affordable Health Care Act until after the election.

The result was what many viewed as a serious delay as contractors, states and insurance companies awaited crucial guidance to move forward.

In the Obamabanana Republic EVERYthing is political.

EVERYthing is subverted to “how will this get us one more vote/cost us one vote”.

Obama and Holder are Beyond All HOPE
when even their most boot-licking servants such as
Corrupt Bull Spreaders (CBS stands for that doesn’t it) are forced to cover the evil!

Of course no data was given to programmers so they could get along with the work in a timely manner. Because if that was done everyone would know the Moon-high prices that were to come!

Snark Snark –
for the humor impaired.

According to Max Baucus, they knew healthcare.gov was heading for failure back in April 1013 (some 6 months ago) when he called the website a “train wreck” at a hearing with HHS Secretary Syphilis and IT contractors.

Does anybody think it will be less than 6 months before your average ACORN employee will be able to navigate it ?

Frankly, I prefer to call these folks involved with healthcare.gov MIS specialists, headed by a MIS-manager.

Anyone who deals with software development, knows this is a “boondoggle”.

Even if they can get the front end working, the back end never will.

They will wind up printing out forms for people to fill out and mail in. ( Hand Processing, the old fashioned way.) Both to the government, and the policy carrier.

To get the IRS required processing done, will more than likely mean replacing the IRS’s complete computer / mainframe system.

I could go on and on about this … its a “boondoggle”.

As happens with any boondoggle, I imagine some important DNC/OFA contributors are getting rich off this mess.

Just got back from the range where I had a little fun shooting:

We actually are becoming the Aristocracy of Pull Ayn Rand envisioned. And as always it is being accomplished under the banner of equity and social justice.

Interesting, but if this is the cause, then we could expect the problem to solved in three months or so. From what I am reading, that does not sound likely.

Funny nobody noticed that they stopped issuing regulations at the time it was happening.

I believe today’s media only regurgitates government spin. This is another example. They don’t go out and look for information on their own anymore.

Gov’t. can “regulate” everyone else’s business (e.g., J.P. Morgan Chase) but they can’t regulate themselves. Obamacare is a screw up of white whale proportions.