Judith Butler helped start an academic boycott war that now is turning against her. 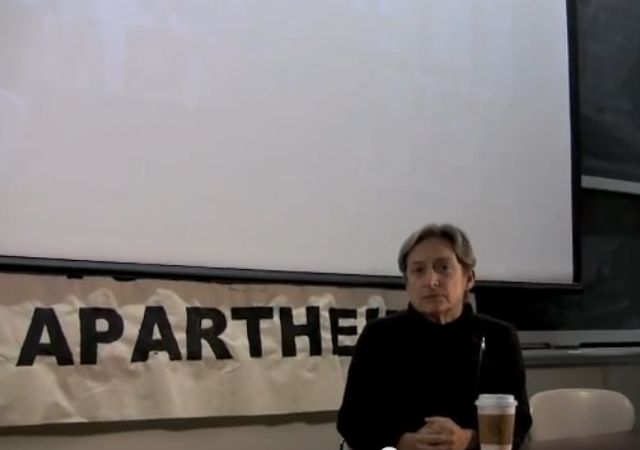 Judith Butler is an intellectual leader of the anti-Israel academic boycott movement.

Butler relentlessly seeks to delegitimize Zionism and Israel in the most crude terms, wrapped in an intellectual blanket.

Butler and the academic boycotters are also part of a BDS movement conceived at the anti-Semitic 2001 Durban NGO conference and which at its core is simply the latest in a century of anti-Jewish boycotts directed at Jews and only Jews in the region.

After the American Studies Association anti-Israel boycott, for which Butler actively advocated, there is something of a counter-boycott growing.

Butler is a subject of that growing movement, recently withdrawing from a Jewish Museum event after protests at her invitation.

That’s one of the problems with academic boycotts — they are easy to start, but hard to contain. If Butler can boycott Israeli academics, then why can’t pro-Israel academics, students and supporters boycott Butler?

The inevitability of a counter-boycott, including legislation, was easily forseeable. That was one of the reasons so many university presidents — over 250 so far — came out against the ASA anti-Israel academic boycott.

Now Butler is complaining that the counter-boycott movement is illegitimate and an affront to academic freedom and free speech, as reported by Inside Higher Ed:

Noted scholars Judith Butler and Rashid Khalidi jointly wrote a statement, signed by about 150 other academics and artists, condemning the intimidation and censorship of individuals who support the boycott, divestment and sanctions (BDS) movement against Israel.

“Whether one is for or against Boycott, Divestment and Sanctions (BDS) as a means to change the current situation in Palestine-Israel, it is important to recognize that boycotts are internationally affirmed and constitutionally protected forms of political expression,” the Butler-Khalidi statement reads. “As non-violent instruments to effect political change, boycotts cannot be outlawed without trampling on a constitutionally protected right to political speech. Those who support boycotts ought not to become subject to retaliation, surveillance, or censorship when they choose to express their political viewpoint, no matter how offensive that may be to those who disagree.”

The statement continues: “We are now witnessing accelerating efforts to curtail speech, to exercise censorship, and to carry out retaliatory action against individuals on the basis of their political views or associations, notably support for BDS. We ask cultural and educational institutions to have the courage and the principle to stand for, and safeguard, the very principles of free expression and the free exchange of ideas that make those institutions possible….”

Sorry Butler, if academic boycotts are legitimate forms of speech and expression, then so too are academic counter-boycotts. You can’t have it both ways.

Butler has no standing to complain. She started the academic boycott war, and now it’s not going the way she hoped.

I remain against academic boycotts, but I have no sympathy for and will not jump to the defense of those who started the war the rest of us tried to prevent.

“We ask cultural and educational institutions to have the courage and the principle to stand for, and safeguard, the very principles of free expression and the free exchange of ideas that make those institutions possible. This means refusing to accede to bullying, intimidation, and threats aimed at silencing speakers because of their actual or perceived political views.”

Pretty words. Thank you, Professor, for forcing these institutions to live up to them.

Yeah, I read “Revolution for the Hell of it” and “Rules for Radicals,” too.

Maybe someone should email her pretty words to Brown University where Ray Kelly was shouted down and not allowed to speak or she could protest the left’s ill treatment of free speech at Brown University herself.

However, I think her (and most of the left’s) approach is more free speech/actions for me but not for thee.

So the boycotter is boycotted. To me it seems like balanced justice.

Sorry Butler, if academic boycotts are legitimate forms of speech and expression, then so too are academic counter-boycotts. You can’t have it both ways.

When weak, the left preaches tolerance. When strong, conformity.

Yes. BDS flip-flopped because they realized they had overestimated their position.

Butler has ordered the invasion of higher education only to protect and defend the human rights of the BDS-speaking minority population in the faculty lounge region of the American University.

Crimea river. She was told she’d have more flexibility after the ASA vote.

Airtight leftist logic: Free speech means free speech for me, not for you.

Any individual on the left has as much right to speak as everyone who disagrees, put together.

Or so they think.

“…boycotts are internationally affirmed and constitutionally protected forms of political expression,… boycotts cannot be outlawed without trampling on a constitutionally protected right to political speech. Those who support boycotts ought not to become subject to retaliation, surveillance, or censorship when they choose to express their political viewpoint, no matter how offensive that may be to those who disagree.”

This is a lovely statement with no sense of irony or self-awareness at all. Butler-Khalidi (I wonder how mant times he has visited the White House these past few years?) did omit a few words though. This should have read: “Leftist, anti-Semitic boycotts….”

” without trampling on a constitutionally protected right to political speech. Those who support boycotts ought not to become subject to retaliation, surveillance, or censorship when they choose to express their political viewpoint, no matter how offensive that may be to those who disagree.””
Isn’t that what the BDS movement is trying to do? Intimidate people that have a different political viewpoint?
That and help murderous thugs kill Jews.

Not to mention that Butler’s boycott is antisemitic in nature, while the boycott against Butler is to fight against antisemitism, a legitimate purpose.

That said, there should be no academic boycotts. How better to expose the hate of these “seekers of academic freedom” as they act to destroy the free society they succeed in for an alternative utopian hell on earth.

Butler sounds so intelligent, but was not smart enough to see what would obviously happen.

“You can’t have it both ways.”

Heh. It’s almost as if you’ve never spoken to a leftist for ten minutes. That’s double the over/under on them arguing a contradiction.

Butler should be called out for what she is. I’ve known dozens like her who claim they are “only against Zionism, not against Jews.” It’s the thinnest veil one can put over antisemitism, and it succeeds only insofar as it is tolerated, much like The Emperor’s New Clothes.

If you can hold your tongue and engage these folks, and change the subject from Israel and Jews and Zionism and the oppression of Palestine, etc., and move on to more general areas of international politics, they will invariably invoke antisemitic oldies-but-goodies like “international financiers,” “big bankers,” or “the money men,” or mention some conspiracy like the Bildebergers or Rothsteins or the Trilateral Commission that features Jews as main villains.

Sorry, Judith, but if you waddle like a duck and quack like a duck, kiss my ass.

Recommend making not getting burned a higher priority next time you start a fire Judy. Also, recommend attending a 101 class on Irony and Self-Awareness next time you swing by the campus.

I expect people of average intelligence or better to avoid falling into obvious logical fallacies. I recommend regular Church attendance to satisfy one’s human need for faith. Political ideology is an imperfect (if all too common) substitute.

Have not met or heard Judith Butler in person but I have read (some of) her writings. From the writings alone it was not possible for me to understand how this individual could be considered a leading intellectual. Her public advocacy has bought out her views more clearly and these view are frankly idiotic. A person who espouses idiotic views by extrapolation is an idiot and not worth inviting to talk at prestigious conferences and forums. It doesn’t seem so much like a counter-boycott but more like people waking up to the fact that the emperor has no clothes. It reminds me of when Stephen Hawking’s book for the general public “A brief history of time” was a bestseller. I could not understand the book so I asked my sister, a particle physicist at CERN, if it was a good introduction to this area and she confessed to me that she had read it but it was completely unintelligible. I guess at least Stephen Hawkins has made some important scientific contributions but his ability to be coherent outside his framework of expertise is no better than Judith Butler. http://www.dailymail.co.uk/news/article-2322228/How-Stephen-Hawking-boycott-Israel-makes-microchip-enables-talk-By-DOUGLAS-MURRAY.html

and the phrase: Hoist by your how petard! has shown to be so very true.

“As non-violent instruments to effect political change, boycotts cannot be outlawed without trampling on a constitutionally protected right to political speech. Those who support boycotts ought not to become subject to retaliation, surveillance, or censorship when they choose to express their political viewpoint, no matter how offensive that may be to those who disagree.”

I’ve commented on this before (possibly here, I don’t remember). She’s so close to a dramatic truth, it’s tragic that she doesn’t quite get it.

“Those who support boycotts ought not to become subject to legal/criminal retaliation, surveillance, or censorship….”

Or, as we’ve been telling our kids, “You are free to choose your own actions. However, you do NOT get to choose the consequences of those actions.”

I’m a bit puzzled by this. Is it totally content-free, or is it conceivable that there’s some basis for it? “Internationally affirmed” is blatant blather, a dose of “baffle ’em with BS”. But “constitutionally protected” possibly is not; too bad they didn’t specify which constitution does the protecting.