Also known as “Israel Apartheid Week,” but students finally are ReThinking the hatefest. 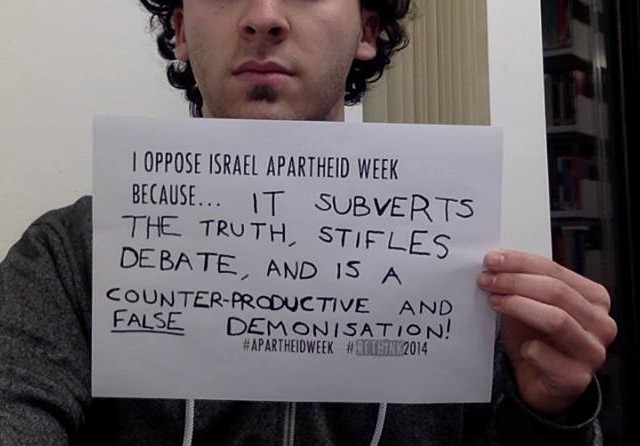 The ancient “blood libel” that Jews use the blood of non-Jewish children to make Matzah has its modern incarnation in Israel Apartheid Week, which starts this week on campuses.

Not surprisingly, the incoming President of the American Studies Association, Lisa Duggan of NYU, is leading an anti-Israel effort that coincides with Israel Apartheid week, but doesn’t want people to know about it (via Elder of Ziyon):

The Apartheid accusation is false at every level, and was a deliberate propaganda strategy devised at the anti-Semitic Durban NGO conference in 2001.

Another ring in the Durban circus was the NGO forum, taking place just outside the conference center. Although the NGO proceedings were intended to provide a platform for the wide range of civil society groups interested in the conference’s conciliatory mission, the forum quickly became stacked with Palestinian and fundamentalist Arab groups.

Each day, these groups organized anti-Israeli and anti-Semitic rallies around the meetings, attracting thousands. One flyer which was widely distributed showed a photograph of Hitler and the question “What if I had won?” The answer: “There would be NO Israel…”

At a press conference held by Jewish NGO’s to discuss their concerns with the direction the conference was taking, an accredited NGO, the Arab Lawyers Union, distributed a booklet filled with anti-Semitic caricatures frighteningly like those seen in the Nazi hate literature printed in the 1930s. Jewish leaders and I who were in Durban were shocked at this blatant display of anti-Semitism.

For me, having experienced the horrors of the Holocaust first hand, this was the most sickening and unabashed display of hate for Jews I had seen since the Nazi period.

Sadly, but perhaps not surprisingly, the official NGO document that was later adopted by a majority of the 3,000 NGOs in the forum branded Israel a “racist apartheid state” guilty of “genocide” and called for an end to its “racist crimes” against Palestinians….

“Israel Apartheid Week” as part of the BDS movement is the direct by-product of the Durban anti-Jewish hatred — a history few of its participants probably realize.

In reality, Israel is nothing like South Africa under Apartheid.

First and foremost, Israel is a majority rule democracy.  South African Apartheid was the subjugation of the majority by the minority based on racial classifications — the exact opposite of Israel.

Israel is a multi-racial and multi-ethnic society in which the dividing lines, as in many countries and certainly all Mideast countries, is religion not race.  In Israel the religious minority has full voting rights, members in the parliament and in the Supreme Court, and all the civil freedoms of the majority. Even the Jewish majority (about 80%) is multi-racial and multi-ethnic, including half the population being refugees and their descendants from Arab countries, Ethiopia, and other non-Western places.

Minority rights in Israel may not be perfectly protected, but they are protected better than in any other Mideast country.  Even in the U.S., how many times do we hear about “institutional racism,” and “white privilege” and other alleged systemic legal and cultural biases?  How many times are laws challenged because of disparate impact on minorities? Does that make the U.S. an Apartheid state?

The West Bank is under military rule not for racial reasons, but for security reasons. The so-called “Apartheid Wall” (which is a fence in most places) was not built for racial reasons, but only after several hundred Israeli civilians were killed by suicide bombers in buses, restaurants, and even Passover Seders. The barrier played an important part in stopping that suicide bombing campaign. Even the checkpoints, which have decreased in numbers over the years, to this day stop attacks including one today. Israel repeatedly has offered to exit virtually all of the West Bank in exchange for peace — offers that have been rebuffed at Camp David and numerous other times.

At every level, the accusation of “Israel Apartheid Week” is nothing but propaganda.  And it’s coming to campuses near you, often urged on by professors and a well-organized and financed international boycott campaign.

What you will not see at the mock walls and checkpoints are the mock suicide bombers or backpack bombs (similar to the one Hamas planted in the student cafeteria at Hebrew University). 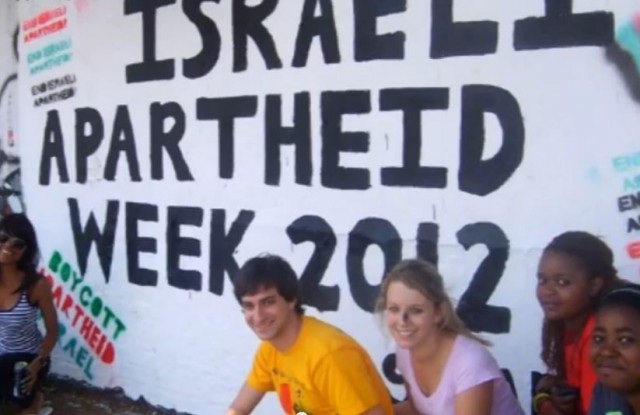 Because the pro-Israel side is not into propaganda, don’t expect to see Palestinian Terror Week organized to counter Israel Apartheid Week.  A blogger at The Times of Israel observed:

In fact, a “Palestinian Terrorism Week” would be grotesque, disgusting and rather quite outrageous. Indeed, any representation of the atrocities that made this ugly wall necessary would be in bad taste: one could not make the message visual without also being graphic, or graphic without being crass.

And therein lies the inescapable problem. Israel has too much self-respect to expect its activists to appeal to the court of public opinion through sob stories. Instead, pro-Israel activists rely on Hasbara: literally, ‘explanation’. Israel counters the image of the cold, hard wall with cold, hard facts, because the truth of the matter would be uglier still. Perhaps Israel is losing the battle for hearts and minds because appealing to hearts would be too painful and degrading.

I’m not sure I agree with that view, but it is the reality that you are not going to see many, if any, pro-Israeli students dressing up as mock suicide bombers, airplane hijackers, Kassam missile operators or infant stabbers.

But there is an important movement growing, the Rethink movement. Rethink 2014 seeks to counter hateful Apartheid Week movement through student statements similar to the featured image and this one: 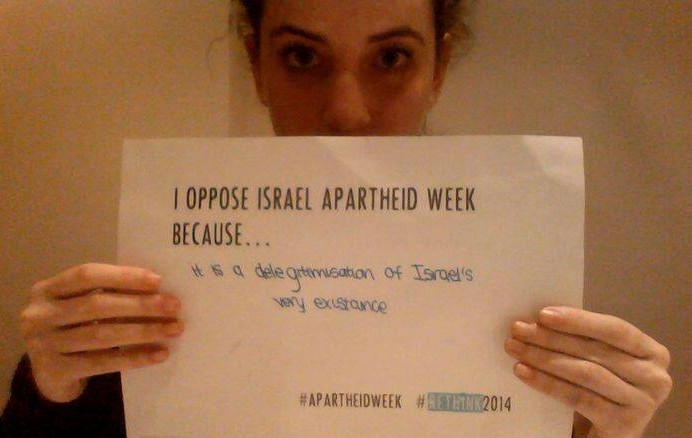 This quiet, honest, respectful speaking of the truth to hate could be quite effective. We need to encourage these and other campus activities.

As for me, I’m speaking at Ithaca College Tuesday night.

I had heard that one of the leaders of the anti-Israel academic boycott movement — Cornell Professor Eric Cheyfitz — had been invited by several Ithaca College academic units to give a speech in favor of the academic boycott. I requested that I be allowed to participate so that students could hear both sides — but I was offered a laughable 5 minutes time. So I reached out to Ithaca College Hillel, which is sponsoring my talk just after the anti-Israel talk.

From what I hear, it should be a hot night. I’m looking forward to it.

For far too long the campus debate has been one-sided against Israel that needs to change.

I was just struck by the realization that people in the academe live in…and have their hair on fire over…entirely false constructs of reality.

Linked: ‘Professor Lisa Duggan and the Academic Boycott of Israel’.

Thanks William. As always, outstanding posting!

Rags, well yes. Properly deconstructed there is neither truth nor falsity, only Power.

Professor, would you explain please what the anti-Israel movement has to do with “American Studies” (and what is American Studies)? I’m having a difficult time figuring out what this field entails, other than it appears to be a discipline that embraces anything it can find that’s also anti-American.

It is correctly meant to be “American CRITICAL Studies”.

Look up “Frankfurt School”. Bill Whittle has an excellent video on the subject for a quick short-course.

Found it; thanks. For anyone else who wonders, it’s HERE.

By the way — Whittle talks about the Marxist overthrow of “national identities”. This propaganda also is the basis for Reza Asnan’s Muslim apologia “No god but God”. (Aslan is the Muslim author of the recent book “Zealot”, which should not be read except in the context of his other writings.)

Does this program date conflict with the combination Islamic-American GLBT outreach beheading/animal rights BBQ scheduled for the same time?

I oppose Israel Apartheid week because

It’s all a pack of lies and fauxtography.

Ok, this is all nice and politely pointed, and if you’re dead set on taking the high ground and using it ineffectively, be my guest.

I would do it differently. I would take the choice bits of the Hamas Covenant, and put up a whole mess of different signs with the slogan: “This is what Hamas says.”

Hamas calls on Muslims to sacrifice their souls “in the path of Allah.”

And I would add the question: “Are these the words of good and decent people?”

Why do the nations rage,
and the peoples plot a vain thing?
The kings of the earth take a stand,
and the rulers take counsel together,
against the LORD, and against his Anointed, saying,
“Let’s break their bonds apart,
and cast their cords from us.”
He who sits in the heavens will laugh.
The Lord will have them in derision.
Then he will speak to them in his anger,
and terrify them in his wrath:

“Yet I have set my King on my holy hill of Zion.”
I will tell of the decree.
The LORD said to me, “You are my son.
Today I have become your father.
Ask of me, and I will give the nations for your inheritance,
the uttermost parts of the earth for your possession.
You shall break them with a rod of iron.
You shall dash them in pieces like a potter’s vessel.”

Now therefore be wise, you kings.
Be instructed, you judges of the earth.
Serve the LORD with fear,
and rejoice with trembling.
Give sincere homage to the Son, lest he be angry, and you perish on the way,
for his wrath will soon be kindled.
Blessed are all those who take refuge in him.

I am really thankful for the leadership of Israel. Also, what a great place for America to stockpile weapons! 🙂

Wrong! Mars is where this present alien residue resided for a damn long time, their spawn exists amongst now.

Branson, is you are watching, take these alien spawn back with you, when you decide to go.

That “rock” that was spotted wasn’t just A rock, what it “Is, Is” (thanks Bill), left over bits and pieces of these aliens for bearers.

*dats for you barry, just in case you and your spy pissheads, are lookin’ in.

Durban 2001 happened days before 9-11. Otherwise, it would have been news all over the world and much better known today.