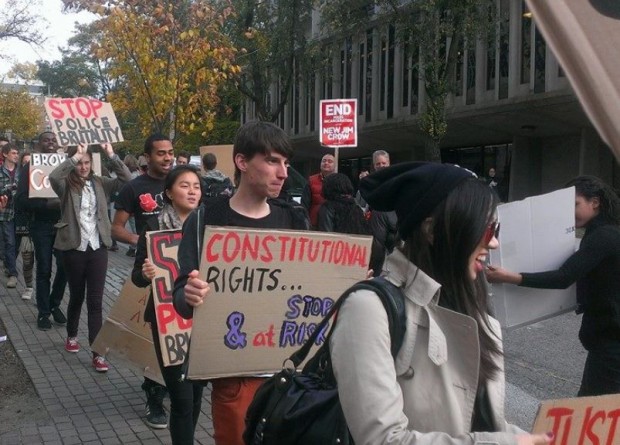 Where the biggest mouths — almost always left-wing — shout down and shut down voices they don’t like.

Today it was NYC Police Commissioner Raymond Kelly. Prior to his appearance on campus, there was a petition drive demanding cancellation:

According to the Brown Daily Herald, protesters against the NYC stop and frisk policy disrupted and caused the talk to end after just 30 minutes.

The feature image above was posted to Facebook and shows protesters outside the building where the speech was to be held. Protesters were encouraged by protest organizers to “Bring Drums.”

Inside the auditorium there was loud shouting until the event was closed.

Protester inside List to Ray Kelly: "We're gonna shut you down!" "You're in our world Kelly" #RayKelly

Ray Kelly in response to protesters in audience: "I thought this was the Academy… Where we're supposed to have free speech"

When a Brown administrator asked the crowd to allow Kelly to speak, she was shouted down:

VP Marisa Quinn: "I have never seen in my 15 yrs at Brown the inability to have a dialogue." Quinn immediately interrupted by audience.

About 200 students and social justice activist protested outside the lecture hall before the talk was scheduled to begin.

“He should know what he has done, its wrong” said Brown University Junior Esteban Roncancio. “I’m sure he got the message” he added.

Kelly was scheduled to give a lecture titled “Proactive Policing in America’s Biggest City.” However the students didn’t even want him at Brown.

Dear Members of the Brown Community,

Earlier today, a public lecture and opportunity for questions and answers with New York City Police Commissioner Raymond Kelly, hosted by the Taubman Center for Public Policy and American Institutions, was prevented from taking place. Some students and members of the local community in the auditorium disrupted the lecture through shouting, persistent interruption, and coordinated chants to the point that University officials had no choice but to declare the event over.

This is a sad day for the Brown community. I appreciate that some members of our community objected to the views of our invited speaker. However, our University is – above all else – about the free exchange of ideas. Nothing is more antithetical to that value than preventing someone from speaking and other members of the community from hearing that speech and challenging it vigorously in a robust yet civil manner….

Don’t think for a second that this is an isolated incident.  Here are just some of the disruptions we have covered at College Insurrection:

I guess they didn’t get Hillary’s message that there would be no yelling in the future.

Just more Brown Shirt tactics from the Left. Maybe they would break some crystal while they are at it.

“Free Speech for Me and not for Thee!”

I’m wondering how many of the social-justice protesters will be mugged on their next trip to NYC.

Sounds like a prime “Teachable Moment” for the immature barbarians.

So, we start here.

Do you honestly think you did a good thing by disrupting an invited speaker on campus? Maybe if you had shut your ignorant mouths for a little while, you might have learned something. That’s why you’re in school, isn’t it, to learn? So, what makes you think that you have the intellectual chops to decide whether or not someone is worthy to speak? If you had had the wisdom, or failing that, the courtesy, to shut up for a while, you might have found out that the man had a point. Instead, you proved that you have no sense.

You have disgraced yourselves with your stupid lack of control, much like a bunch of untrained, young puppies.

You will be lucky if your names are not recorded in connection with your foolishness.

They have been taught since they first went to preschool that this is how they should behave. Their every whim and sensitivity needs to be absolutely recognized by the world. No one else’s makes any difference.

Why are the tax payers subsidizing these snowflakes by guaranteeing their student loans?

I just don’t understand why Ray Kelly, or the Brown administration, or SOME adult in the room, didn’t just say to the brats, “And I demand that you f*ck yourselves.”

Civility towards young totalitarians has gotten us exactly nowhere for the past 45 years.

Regardless, I’d rather have seen Ivy League colleges declare bankruptcy due to falling enrollments, than to have watched them turn themselves over to the leftist fringe for the past 2 generations.

What’s kind of schadenfreudelicious is that the campus administrators are most likely the unruly mob of 1968 that should have been jailed instead of “dialogued” with back then.

What puzzles me is that despite their lifetime of Regressive indoctrination, these students don’t possess the almost instinctive desire to rebel against the older generation. They deserve to live in Stepford, but we don’t.

Yet another good reason for the higher education bubble to explode…

Of course, the so-called students (who pay more and study far less than they used to) have probably never seen a NYPD officer in their lives. Over 53% of NYC cops are minorities.

They get their information through twitter and facebook (in college) and feel no need to obtain any facts by actually listening to the Commissioner. Poor things, such empty minds…

Why aren’t rude members of the audience escorted out? If you did that at the opera or in a theature, you would be. Why is a lecture any different? Where are the rules? The educational institutions seem to have “no tolerance” rules for all other kinds of “lacks of courtesy”.

If it’s a school event, and students disrupt it, surely the school can discipline (expel) the student(s) involved? Their actions disrupt the education of those who’ve paid to be there – in effect, it is a theft of service(s). More so if it’s a paid event.

They should be coned!

>>”However, our University is – above all else – about the free exchange of ideas.”

Sorry, sister. It hasn’t been about that for a long time.

We’re letting these little Nazis off the hook too easy.

The lack of unbelievable outrage among us is just as frightening as these Brownshirts-in-training are proving to be.

You nailed it. Again and again we beat retreats from these thugs in training. Breitbart didn’t. Breitbart went right up to the line and confronted them.

Another reason to question the actual value to society of these institutions. As said above, the citizens are guaranteeing the loans for the tuition and the administrations are unwilling to provide the service they claim to offer. And these idiots will go demonstrate in some city center when they discover that the cash society doesn’t think that diploma is worth what it cost.

This is the next cycle of occupy getting its moves worked out.

Now if Ray Kelly had done some real police work, like gunning down an unarmed black woman who went too close to the Obama White House, then they would give him a standing ovation.

“…University officials had no choice but to declare the event over.”

Utterly false. University officials, having legal control over the venue, could have had those disrupting the event warned to behave, then asked to leave, then removed, and then arrested for trespassing.

The University ‘officials’ did nothing of the sort. They, being the titled responsible parties present are as culpable as the childish leftist hooligans.

If Brown doesn’t agree with this sort of thuggery surely they will expel the ringleaders and suspend the rest…right?

I expect the coming silence in that regard will in fact indicate that Brown doesn’t really have a problem with these sort of tactics.

Oh, and one suggestion for speakers going into leftist territory…bring a video of a similar shout down from Germany in the 30s or some such.

When the crowd starts this sort of thing…play the video.

I am so impressed by the placards and protestations of ‘Police Brutality’ by these hyper-coddled brats within the safety of their campus.

I see these kind of hipsters on my daily commute. The kind who will bolt into the next car of the L train the second a couple of thugs slip in.

The kind who can write missives about ‘police brutality’ but will never dare rent an apartment in East Harlem or Bedstuy Brooklyn.

And whose first instinct is to dial-in screaming for Ray Kelly’s cops for help when they are being robbed and assaulted by a couple of Brothas from Washington Heights.

If you must speak at a Left-wing venue, bring a screaming goat to offset detractors in the audience.

Hopefully someone was taking pictures of the protesters and will helpfully be providing them to the head of the Student Disciplinary organization at Brown for the purposes of filing charges of breaching the “Student Code of Conduct” or whatever it happens to be called there.

I’m sure that this conduct qualifies. Should punishment fail to be meted out, that gives all future Conservative protesters cover against any punishment for the same tactics (even though we don’t use them) to shut down the speeches of the ultra-marxist progressives when they come to speak.

I see that diversity is all the rage today…and that’s all it is.

[…] Jacobson documented this abomination at Legal Insurrection last night. Watch below as Ivy League college students reject the free exchange of ideas by refusing to allow […]

[…] If you missed the shameful display put on by some students at Brown University this week, you can read a comprehensive report at Legal Insurrection. […]