Wendy Davis needs to denounce and disassociate from Battleground Texas

Wendy Davis needs to denounce and disassociate from Battleground Texas

Davis’ close ties to the group are coming back to haunt her. 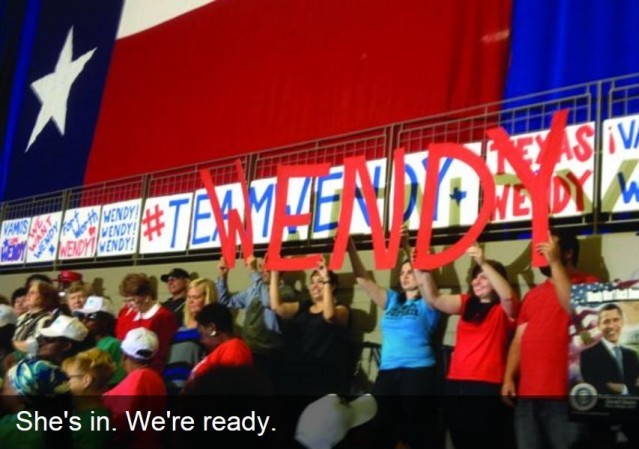 James O’Keefe released a previous undercover video regarding the efforts of Democratic operatives to obtain or try to obtain Obamacare registration information in order to “Turn Texas Blue” and help Wendy Davis:

Battleground Texas supporters of Davis also were caught on video laughing at Greg Abbott being in wheelchair.  Battleground Texas not only supports Davis, it is engaged in an aggressive voter registration drive, but how it uses the information it gathers in registering voters is in issue.

Battleground Texas Field Organizer Jennifer Longoria was caught on camera multiple times making statements such as, “So every time we register someone to vote we keep their name and number.” Doing so however, is illegal. According to the Secretary of State, it is unlawful to transcribe, copy, or otherwise record a telephone number furnished on a voter registration application.

Even scarier, Longoria is training others to become Deputy Registrars and register Texans to vote. No doubt, using the same illegal methods.

Watch the video for yourself below and if you think exposing voter fraud is critical to the integrity of America’s elections, please consider donating $25, $50, $100 or whatever you can afford today.

The flacking for this poor, sick woman is unbelievable.

Collectivists cheating in Texas has a long and colorful history, going back to the Progressive Era.

I don’t consider her poor or sick – just a typical Democrat doing what comes naturally: heartlessly lying, cheating, killing (indirectly, by abortion), all to win – by any means necessary.

Hmmmmm…… Well, mental illness, perhaps. I will agree with that. 😉

LBJ would have been proud of their tactics. So would Archie Parr.

This, along with the incessant propaganda people are consuming day-in, day-out 24/7, are why elections are favoring Democrats.

Stifling the vote; fixing the vote via illegal registration/voting/ballot box stuffing/etc.; and a media machine in willing subservience to the Democrat-run and controlled system – all combined are what every state is up against. It has successfully turned Florida and Virginia blue, and many other states purple. This MUST be fought and exposed – and, hopefully, prosecuted, when we have a DOJ that enforces the rule of law again.

Add to that the Motor-Voter laws, illegals (aka “Dreamers”) getting amnesty – or simply being allowed to vote, felons/convicts voting, intentionally registering the dead and pets to vote (which happened here in VA in 2012)…..we have a nightmare mess to fight. And fight it we must!

No elections can be close anymore. NO ELECTIONS CAN BE CLOSE ANYMORE – or this illegal, unchecked vote-system tampering will ALWAYS swing the vote to favor Democrats. Since RINOs won’t stand up against this illegal mess – or worse, claim that it isn’t even happening! – we can’t just “let the Republicans” take this on.

Another issue that needs to be further exposed (Project Veritas did some under-cover videos on this not too long ago) is the state election system – the employees – are favoring Democrats in their registrations, when party affiliations are identified on the forms. GOTV groups, combined with “those who count the votes” and the state systems that “ensure voting integrity” are all very much suspect in allowing illegal activity to favor Democrats. True the Vote has done yeoman’s work on this little-explored frontier.

Keep it up Project Veritas!!! One day, James O’Keefe is going to be seen as the hero and patriot he is. Once the praetorian-guard media is no longer in control of messaging and journalism.

In the meantime, we must stand, resist, and fight using the Constitution and rule of law as our guide; i.e. Legal Insurrection. 😉

I would also like to see an investigation of early voting…another rats nest of corruption. The idea that voting is not a civic responsibility but something to get out of the way when it is convenient is abhorrent to me.

Since the elections in Washington and Minnesota I have said that if a republican doesn’t win by 6 pts., they’ll lose by 2.

This is just one trick in the book.

Everything from the Secretary of State Project:

…to giving millions of Mexicans the right to vote for Democrats….to a couple million incarcerated felons (works in progress)…

They have a full arsenal to ensure their ideology that is built in a lie win elections that are built on a lie.

Brainstorming, to this day, to come up with new and creative ways to get us closer to the last election we’ll ever have…or need–in their view.

Battleground Texas is the game. Wendy is just a piece.

And likely not a very good one, at that.

Actually I think she needs to fully and openly embrace them. And we should point the embraces out loudly and often.
I don’t want her to disassociate herself from something that can hurt her campaign.

You got there first. I fully concur – she needs to do a PDA with a wet sloppy open mouth … well you get the picture.

No way should she stop or even slow down.

Obanemic domestic and foreign policies are reactionary at best and out-right destructive at worst. In other words, this admin doesn’t know what the hell it is doing.

There’s more: Every single issue under Obama is politicized into “race-ist” or “sex-ist” or “killing-grandma-ist” or the “bitter-clinger-ist” or the “bad-apple-ist” or the partisan-ist”, etc. by the slippery-as-eels candidates and the MSM so as to keep reality from even coming close to their controlled narrative.

Ergo, Wendy is the perfect skin-deep tone-deaf candidate for the Democrats.

It is thought by Dems that Wendy represents women – a perfect feminist who served herself first to get to the top of heap. But a heap of what?

Dems, as we are reminded daily by the MSM, move in lock-step fashion. They proudly vote for more, more, more of the unreality heroin injected by Progressivism’s pimps.

Lean Forward. This shot is going in your rear through your wallet.

The more important point is this: how many other Democratic proxy organizations are doing the same thing across the country? It’s not like ‘Battleground Texas’ is a fount of originality in politics.

If they’re doing it, who else is?

Illegal? How about some consequences then?
Banish the whole lot of them from any involvement with the election.
Fines for the organization and individuals.
Jail.
Something.
Anything.

“Wendy Davis needs to denounce and disassociate from Battleground Texas” What? Wendy Davis and her lying, putrid political ilk ARE Battleground Texas in spirit and thought. What you’re asking is for one piece of human garbage to denounce and dissociate themselves from a hive of human garbage. To quote of the elders of this hive, “what difference would it make!”

Thank GOD, Texas is turning from Republican to Democrat. From Red to Blue. Whew! Not one minute too soon! Y’all won’t like it, I don’t care. Way too much hate, skinhead yak and racist bullsh– being tossed around down here in our Great State and it’s time to kick butt. Clean House..Kick the “Haters” and the “Tea Baggers” right in pookie! Can’t live with ’em…can’t shoot ’em. Dang.

“Who’s pissin’ off the whole state of Texas,
Crying aloud that the truth is unfair?
Who’s sends her kids to talk to reporters?
Everyone knows it’s Wendy.

Who’s deceiving all the libs in the city,
Lying to everybody she sees?
Who’s wanting the Dem’s nomination?
Everyone knows it’s Wendy.

Who’s pissin’ off the whole state of Texas,
Crying aloud that the truth is unfair?
Who’s sends her kids to talk to reporters?
Everyone knows it’s Wendy.”

Surely the fact that he’s a federal convict who has been exposed each and every time for using edited video in a dishonest fashion will be represented in this report, right?

Of course not, because he does it to liberals.

Because, that makes actions in blatant violation of Texas election-related laws totally A-OK.

Relax… when Lefties put down their Chardonnay, break out their Mac Book Pros and start trolling your website, that means you are deep in their sh!t and they don’t like it!!