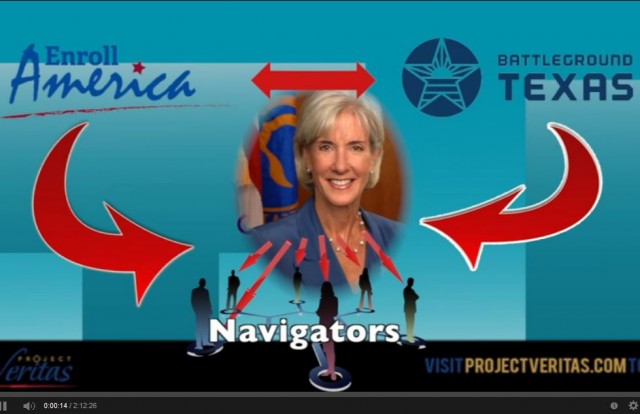 This is a follow up to the undercover video by James O’Keefe’s Project Veritas in which Chris Tarango, Texas Communications Director for Enroll America, was caught offering to help make a connection between the non-profit Obamacare enrollment group and what he thought was a Democratic Party operative.

The operative was part of O’Keefe’s sting operation.

On Friday, a self-described nonprofit, nonpartisan government accountability group filed a complaint with the IRS that Enroll America was violating its tax-exempt status by participating in partisan politics, citing the Project Veritas video as evidence.

The group, Cause for Action, has also written a letter to Texas Attorney General Greg Abbot, asking him to investigate whether Enroll America and other groups have violated the state’s laws and the IRS code.

The resignation occurred Friday evening and was originally reported by Ashley Allen of KCEN (NBC) in Texas. Justin Nisly, Press Secretary for Enroll America, confirmed the resignation of Christopher Tarango in an emailed statement to KCEN about the incident on Friday. Project Veritas has reached out to Enroll America multiple times receiving no response and no statement can be found on Enroll America’s website.

A complaint has also been filed with the IRS accusing Enroll America of violating its tax-exempt nonprofit status by engaging in partisan politics. This is the second complaint against Enroll America. Sebelius’ relationship with Enroll America is currently under investigation by a government ethics audit for her role in fundraising for the group.

The original video can be viewed here.

Chris Tarango will be out of work over the Thanksgiving holidays…

unless he takes unemployment for a while, or suddenly becomes “disabled”.

Then, when he wants to, he’ll surface in another ACORN sprout.

Chris Tarango is an easy enough name to track. Wherever he goes someone will eventually recognize him or his name. The only way for him to work is to take the lowest-profile job he can, and his personality (as demonstrated in the Veritas video) simply won’t let him do that.

Of course they didn’t violate any statutes, only conservative groups can do that.

These libs are like cockroaches, though. You may get rid of one but there are thousands more hidden in the walls.

And trying to be more self righteous than anyone else.

Amazing how quickly they scatter when the light comes on, though, isn’t it?

So when does he start working for Battleground Texas? Monday?