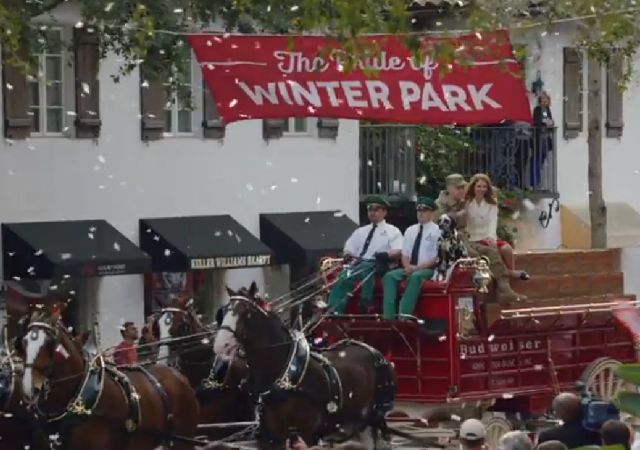 I can’t remember a year when I’ve seen so many Super Bowl ads released online in advance of the big day.

You’ve likely seen many of them by now – the car commercials, the Doritos ads, and we’ve of course seen the Cheerios and SodaStream ads in the midst of other stories.

Some of the ads will air before the kickoff, some during, and there are many floating around that won’t necessarily air during the game but are getting plenty of attention.  I thought for a change of pace I’d grab a few of the more heartwarming or inspiring ads for a post today, with links to some more complete lists at the end.

The first, from Budweiser, is probably my favorite.  It also comes with this short documentary on how the ad came to be, and the campaign utilizes a hashtag – #salute.  Budweiser says, “It’s also a thank you to all of our veterans and active duty troops.”  As for the ad itself, its title sets it up for you:

It’s another Budweiser ad, but it’s just too sweet not to include.

Short and sweet: The Peanuts gang has been with MetLife for some time but this year, they offer a patriotic nod – Peanuts style – to our national anthem.

This struggling high school football player suddenly scores his touchdown, but he keeps on running until he gets to a certain bigger stadium…

Coca-Cola – “Going All The Way”

Maybe not as much touching as it will just make you smile: In a more comprehensive ad campaign, Pepsi actually surprised an entire town when it brought a halftime show to Milligan, Nebraska (what Pepsi says is the halfway point of America).  I wondered what the reaction from the town was with so much commotion rolling in, but it seems as though most were happy to participate?

See lists of more ads at Mashable and CBS News.

While this one was already released as its own ad before the Super Bowl, it’s got such an inspiring story around it that I wanted to include it here anyway.  It’s also got a Super Bowl story behind it, in more ways than one.

so much for a Hero’s welcome…Oh, and thanks to Cuomo’s insane comments, conservatives might not need apply to the State either.

I heard that DeBlasio banned the horse drawn carriages so that he could hand over the stable properties to his cronies, is that true?

Tim Tebow stars in an ad for T-Mobile’s no contract plan that is really funny.

You know what? “flyover country” ROCKS, You showed ’em Milligan!

I HATE that I get cinders in my eyes when I watch these…!!!

They should come with an HAZMAT warning.

The soldier’s welcome was shot in Winter Park, Florida a few weeks ago, it’s not in New York CIty….carriages aren’t illegal here. YAY!

I actually liked halftimes when the entertainment was marching bands. But then, I’m a partially fossilized dinosaur too.

The Derrick Coleman ad is inspiring to deaf people all across America. A deaf relative of mine who doesn’t really watch football emailed about him and said she’s gonna watch Super Bowl. She used to play basket ball, and I watched one time as kids of a public playground slowly eased her off of the court on which she’d been shooting baskets instead of playing with her. It wasn’t about her b-b skills, which are good; it was about her speech which is hard to understand—once they heard her speak, they wanted no part of her. It was cruel and unnecessary. So, Coleman’s ad resonates deeply with hard of hearing people.