Teach the boycotters a lesson, and BUYcott Israeli products. 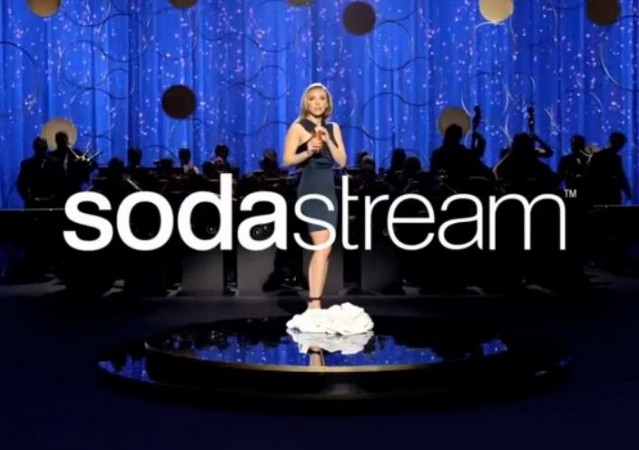 This is a small win, but a win is a win.

We need a lot more such legal challenges to anti-Israel boycott groups, who  are propagandists and have no compunctions about lying and making up accusations in the worst tradition of Pallywood.

Whether it’s hummus, coffee cafes, or academic scholars, there is nothing Israeli that the deranged Boycott, Divest and Sanction movement will not attack.

SodaStream has been under attack for years, with BDS groups trying to keep the product out of stores and commercials off the airwaves.

The BDS movement is so obsessed with SodaStream that it even uses a term, Greenwashing, to complain about SodaStream touting the environmental benefits of its product.

SodaStream has a compelling story to tell, however, as a bridge for peace, one we have focused on before:

SodaStream just won a case against a French BDS group, getting a small amount of damages but also an order that the group stop claiming that it is illegal for stores to sell SodaStream products.

As reported by Haaretz:

A Paris court ruled that a French pro-boycott group must compensate SodaStream for denigrating its products and cease and desist from indicating on its website and other advertisements that the Israeli company’s products are sold illegally.

SodaStream, which produces home carbonation devices and has a large factory in a West Bank settlement, has been the target of the Boycott, Divestment and Sanctions Movement. It has been repeatedly in the headlines recently due to an ad campaign featuring new brand ambassador Scarlett Johansson, who has been criticized for representing a company with operations in the settlements while also serving as an ambassador for international aid group Oxfam.

According to Ma’ariv, SodaStream’s distributor in France, OPM, sued The Association France Palestine Solidarite (AFPS) for claiming its products are sold illegally and fraudulently because they are labeled “Made in Israel” but partly manufactured in the West Bank. The group has been campaigning French retailers to remove SodaStream from their shelves.

The reasoning behind the court’s decision is that, though a boycott is a legitimate tool, the way it is implemented must be done in a fair and appropriate manner that doesn’t manipulate the company’s own ads. For example, AFPS put out adds that read: “blood bubbles” or “Free the bubbles, Palestinians can wait.”

SodaStream also makes news for its SuperBowl commercials being banned because it mocks Coke and Pepsi.

Here’s this year’s banned commercial. It will run, without digs at the big boys.

The answer to BDS is not just pushback and lawsuits, but building relationships with Israelis.

Scarlett Johansson is ending her relationship with a humanitarian group after being criticized over her support for an Israeli company that operates in the West Bank.

A statement released by Johansson’s spokesman Wednesday said the 29-year-old actress has “a fundamental difference of opinion” with Oxfam International because the humanitarian group opposes all trade from Israeli settlements, saying they are illegal and deny Palestinian rights.

“Scarlett Johansson has respectfully decided to end her ambassador role with Oxfam after eight years,” the statement said. “She and Oxfam have a fundamental difference of opinion in regards to the boycott, divestment and sanctions movement. She is very proud of her accomplishments and fundraising efforts during her tenure with Oxfam.”

I’m not much for hummus, but Sabra also makes an excellent Guacamole (Consumer Reports gave it the top rank), and Walmart carries it. Great as a spread or as a dip at Super Bowl parties.

If you support small businesses, please don’t shop at Wal-Mart. Look how many stores are no longer around because they couldn’t compete with Wal-Mart under-cutting their prices. I know Target is similarly a department store who has put mom and pop under but at least they are a competition to Wal-Mart.

What a wonderful story. Thank you. I didn’t know about Sodastream. To attack this company and what it is doing to bridge cultural divides is evil. There’s no other word. These people on the Left live off the division and hate. It’s their industry. It’s evil.

What has the other side created to sell to make life more interesting for the rest of the world? Rockets that sometimes explode before they fly?

My daughter’s got one of those sodastream units. She’d a bit of a foodie, loves being able to make up her own soda rather than have to buy something at the store.

We buy Sabra hummus, which is great, love the spicier flavors. Tribe hummus is good too but Sabra is priced better at our local Target. Never been interested in Sodastream because we don’t drink sodas.

Now if there’s an Israeli made single-serving coffee maker, especially one that uses the common oneshot Keurig cups, that would be a winner.

I use my Soda-Stream to make sparkling water. I also gave several for Christmas, especially to my Lefty relatives and friends!

Sabra hummus is good too, and I buy it to support the cause.

I’m going to buy a unit this weekend. I don’t really care for fizzy drinks; friends do and when they ask for it I’ll show the video.

SODA STREAM IS THE BEST. ALL THE PRODUCTS FROM ISRAEL ARE FOR THAT MSTTER.HOW MANY OF US OWN MOTOROLA ELECTRONICS? I PHONE CELL PHONE ETC. SABRA DOES NOT ONLY MAKE HUMMUS THEY MAKE A VARIETY OF THE MOST DELICIOUS SALADS I HAVE TASTED AS OF YET.THERE ARE THOUSANDS OF PRODUCTS AND INOVATIONS BY ISRAEL . DO YOU PEOPLE KNOW THAT ISRAEL INVENTED A SUIT FOR WHEEL CHAIR RIDEN PERSON WHEN THEY PUT IT ON THEY ARE ABLE TO MOVE AND TAKES STEPS. MANY OF THE VACCINES ARE FOUND BY ISRAEL. CAN WE SAY THE SAME FOR PALESTINIANS? WHAT DID THEY INVENT? ZERO!!! HOW MANY SCHOLARS OR NOBEL PRICE WINNERS DO PALESTINIANS HAVE ? ZERO .THINK ABOUT THAT PEOPLE SUPORT ISRAEL