No surprise that a Brown U. faculty member who supported the student protesters now supports the American Studies Association Israel boycott 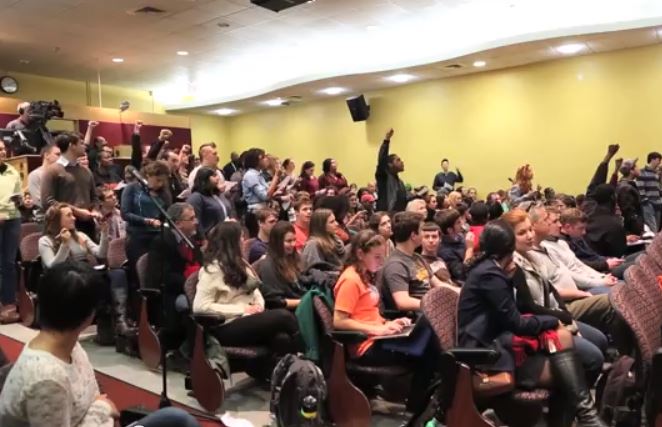 During our coverage of the Ray Kelly shout-down by student protesters at Brown University,  I noted that two Brown faculty members — Linda Quiquivix and Naoko Shibusawa —  who supported the student protesters also were supporters of the anti-Israel BDS movement.

I guess I should not be surprised to read in The Brown Daily Herald that Shibusawa is a member of the American Studies Association, voted for the boycott of Israel, and still defends the boycott:

But others, like Associate Professor of History and American Studies Naoko Shibusawa, said they feel the boycott does not hinder academic freedom, because it targets “institutions and not individuals.” Shibusawa is a member of the American Studies Association and voted in favor of the boycott, though she continues to work with a colleague in Tel Aviv, Israel. The University’s membership expired June 30, but Shibusawa said she has maintained an individual membership and called the ASA an important space for professors and students to present their work, hold conferences and network….

“What’s painful is I have friends on the other side,” Shibusawa said, adding that she knows people who have lost friends over this issue, she added.

In her statement [condemning the boycott], [Brown President Christina] Paxson wrote that “faculty, students and staff are free to express their own ideas and opinions on any issue.”

But Shibusawa said professors nationwide are afraid to speak their minds about the boycott, because it may jeopardize their chances of getting tenure or lead to accusations of being anti-Semitic.

First, Shibusawa simply is wrong that the ASA does not boycott individuals. That is a talking point the ASA has been spreading widely, but it is not true. Boycotting institutions and programs is boycotting the individuals who work in those institutions and programs. Also, as I have detailed, the ASA Resolution adopts the full scope of the international boycott of Israel. Even the ASA non-binding guidelines purporting to scale back the boycott apply to Israeli academics representing their institutions. So if an Israeli scholar wanted to attend the ASA convention on behalf of, say, Hebrew University, that scholar would be barred.

Second, I think Shibusawa is right that there is a generational divide. Many departments in the Humanities and Social Scientists have are overwhelmingly populated with younger faculty who are hostile to Israel, and biding their time until they have the institutional power to turn politicize their departments the way they have politicized academic organizations like the ASA. At least from what I hear, it is pro-Israel Ph.D’s and younger scholars who live in fear and who keep their heads down and mouths shut, much as conservatives on campuses.

Third, it is mighty rich of Shibusawa to complain about living in fear when she supported the students who shouted-down Ray Kelly. She didn’t just support them, she was proud of them:

I applaud the student protesters for their moral courage in a righteous cause against racial profiling and brutal police tactics and for their resolution in the face of the harsh criticisms they have since endured. I am proud of you. You inspire me to try to be a better teacher, scholar and person.

Talk about intimidation and fear, I wonder how pro-Israel or neutral students in Shibusawa’s American History course felt when Shibusawa promoted Israel Apartheid Week 2012 on the course website.

Her “feelings” may be legitimate but they are no reason to stop calling out both her and her organization’s actions. In fact, I would question exactly how “threatened” she really is. There is little chance her position in academia has been put into question, must less that there has been any threat to her person. Perhaps dissent against her opinion is threatening to her by itself.

The growth of the “feelings” defense from the far left is getting out of hand.

Oriental women used to be so hot. Now? Not so much.