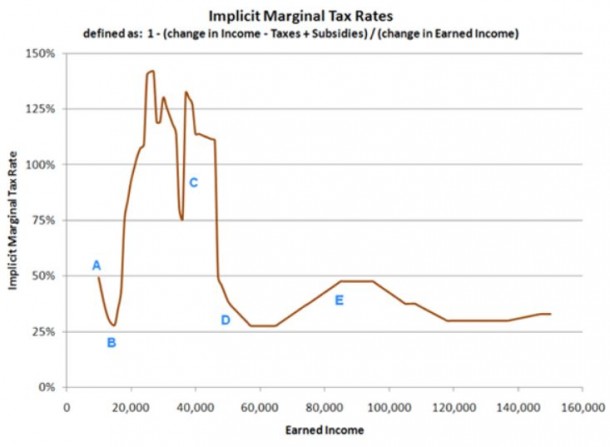 This all was predicted. Obamacare subsidies decrease the incentive to work harder because as one’s income increases, the subsidies vanish.

It’s what we call the implicit marginal rate which takes into account not only tax marginal rates, but also loss of government benefits.

In the key 30-50,000 range, the implicit marginal rate has exceeded 100% even before Obamacare (see Featured Image above) — meaning that it is economically irrational to earn an extra dollar because you will lose more than one dollar through taxes and loss of benefits.

The CBO is predicting a loss of 1-2% of employee hours because workers choose not to lose the subsidies, as reported by Reuters (h/t Bryan Preston)(full report embedded at bottom of post):

A historically high number of people will be locked out of the workforce by 2021, according to a report by the Congressional Budget Office released Tuesday.

President Barack Obama’s signature health-care law will contribute to this phenomenon, the CBO said, citing new estimates that the Affordable Care Act will cause a larger than-expected reduction in working hours—eliminating the equivalent of about 2.3 million workers in 2021 versus a previous estimate of an 800,000 decline.

“CBO estimates that the ACA will reduce the total number of hours worked, on net, by about 1.5 to 2 percent during the period from 2017 to 2024, almost entirely because workers will choose to supply less labor—given the new taxes and other incentives they will face and the financial benefits some will receive,” said the report.

The ACA’s largest impact on labor markets will probably occur after 2016, once its major provisions have taken full effect and overall economic output nears its maximum sustainable level. CBO estimates that the ACA will reduce the total number of hours worked, on net, by about 1.5 percent to 2.0 percent during the period from 2017 to 2024, almost entirely because workers will choose to supply less labor—given the new taxes and other incentives they will face and the financial benefits some will receive. Because the largest declines in labor supply will probably occur among lower-wage workers, the reduction in aggregate compensation (wages, salaries,
and fringe benefits) and the impact on the overall economy will be proportionally smaller than the reduction in hours worked.

Specifically, CBO estimates that the ACA will cause a reduction of roughly 1 percent in aggregate labor compensation over the 2017–2024 period, compared with what it would have been otherwise. Although such effects are likely to continue after 2024 (the end of the current 10-year budget window), CBO has not estimated their magnitude or duration over a longer period.

The reduction in CBO’s projections of hours worked represents a decline in the number of full-time-equivalent workers of about 2.0 million in 2017, rising to about 2.5 million in 2024. Although CBO projects that total employment (and compensation) will increase over the coming decade, that increase will be smaller than it would have been in the absence of the ACA.

That’s right, the equivalent of 2 million fewer jobs because people are economically rational.

It always comes back to the General Theory of Liberalism: liberals don’t understand incentive effects.

As long as they get what they want, it doesn’t matter to them initially. They have other goals than helpful concern about their country or it’s people. The main one is their path of destruction to obtain their goals. Of course, it will crash and fail miserably. They don’t seem to understand they will be included in this crash and misery.

The greatest boondoggle and government-sanctioned abuse of the citizen and taxpayer in American history. Bernie Madoff has nothing on Barack Obama.

What good thing that Pres. ScamWOW promised has this OBamaDoggle delivered?

What BAD thing we predicted has not been…or is not NOW BEING…realized?

Just in the arena of medical innovation, this monstrosity will create and has created its own body count.

Libs don’t understand what it is to work let alone work hard enough to move up the economic scale. Give people a reason to be lazy and voila! Keep rewarding the lazy and those who work hard will not see a reason to keep working hard if a portion of their reward will go to the lazy.

Liberals are unable to connect the dots between self-reliance and self-entitlement. Self-reliance is a long term goal attained by investment into achievements you work towards wherein self-entitlement is attained by the mere presence of your existing and your want to achieve like goals but without structure and investment and then complain and holler foul and/or discrimination when it doesn’t happen for you in a parallel time frame.

So there will disincentives to work longer hours because of the subsidies, so the drain on the Treasury will go on but revenues will decline. But that’s only the start of the fiscally irresponsible situation.

Obama and the Democrats also want full immigration reform which will double the number of legal, unskilled immigrants entering every year – to compete for fewer jobs.

In what rabbit hole is there a Wonderland where this makes any sense at all as policy?