Posted by William A. Jacobson Wednesday, November 11, 2009 at 07:45am 8 Comments
More Sharing Options

Is it possible to pay more than 100% of your last dollar of income in taxes? And if it were, would you bother to earn that last dollar?

Herein lies the key to how Democrats will obtain a permanent, economically-enslaved majority if universal income-based health care subsidies are enacted. And it is much worse and more nefarious than even the Wall Street Journal recently pointed out in Confessions of an ObamaCare Backer.

Here’s an explanation, plus a chart, from an article titled The Dead Zone: The Implicit Marginal Tax Rate (h/t The Right Coast):

To say that antipoverty programs in the United States are perverted may be an understatement. When you take into account the loss of means-tested benefits (e.g., cash assistance, food stamps, housing subsidies, and health insurance), and the taxes that people pay on earned income, the return to working is essentially zero for those in the lower two quintiles of the income distribution.

For many of the working poor, the implicit marginal tax rate is greater than 100 percent. The long-run consequence of undermining the positive incentive to work is, of course, the creation of an underclass acclimated to not working; the supplement of cash and noncash benefits with income from crime and the underground economy; and the government resorting to negative incentives such as mandatory work programs….

Everywhere, the government’s desire (meaning the left-liberal do-gooders’ desire) to be generous to the poor is destroying the positive incentives to work and to save that are so necessary for a well-functioning economy. What they have done to Detroit, and are doing to New Jersey, they will do to the entire cuntry. 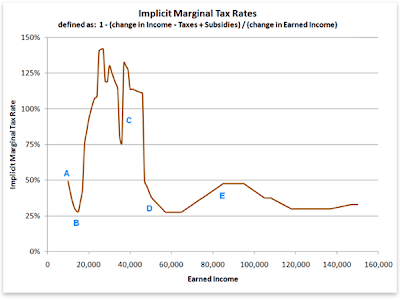 This situation will only get worse as Obama implements universal income-based health care subsidies and other goodies which will phase out as income rises. As The Right Coast puts it:

And those rates, which exceed 100 percent for many people, are calculated under existing law and before the health care monstrosity is passed, which makes matters much worse.

In addition to all the other problems with highly subsidized, income-tested health care benefits, will come an even more permanent underclass which, being economically rational, will choose not to earn another dollar rather than lose more than a dollar of benefits.

Conservatives often speak of the Obama-Pelosi-Reid axis as seeking to create a permanent Democratic majority through big government handouts. This implicit marginal tax analysis shows that it is much worse than it seems; the permanent big-government majority will not be there by choice, but by government-created economic necessity.

Lower income voters, who pay no federal taxes and who are very voters facing this government-benefits trap, voted for Obama overwhelmingly, as this chart from the Tax Prof shows: 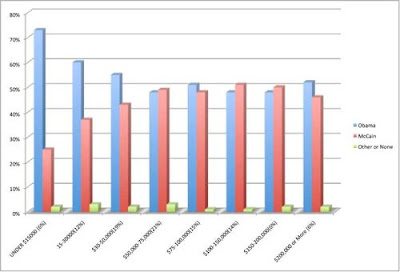 A permanent, Democratic-voting majority living off government benefits with no way out. It really is that bad, and this really is a once-in-a-lifetime chance for the Democrats to achieve a permanent, economically-enslaved majority.

Thank you for technically explaining what we all feel intuitively is true!

A war for freedom and liberty was sparked by "taxation without representation."

Now we are watching the flame being slowly extinguished by "representation without taxation."

I am seeing more small businesses in my area actively avoid taxes through cash payments. No taxes for the state, no federal taxes paid. The other strategy many have taken is to pay consults and temporary help in cash. Again, no taxes for either individual. Plan on seeing much more of that in the years to come.

My wife grew up in the now-defunct USSR. She and our Russian friends tell me that this kind of active circumventing of intrusive (and outrageous) government policy was (and is) typical in Russia. When a government oppresses its people it looses the critical legitimacy needed to operate.

Important post, Professor. I think the big and largely hidden component of this is cash payment through the underground economy. When a landscaper hires Mexican day laborers, there is a lot of cash under the table. Ditto domestic workers — i.e., the nannies and housekeepers whose wages are rarely reported. And what waiter or other tip-earner isn't savvy enough to report just enough income to satisfy the IRS but not enough to lose generous benefits.

The health care costs proposed on most small business clearly will encourage more of this, as well as more use of independent contractors. As it is, advertising, PR, accounting and other kinds of professional firms rely heavily on such outsourcing. All the more if they take on a responsibility to pay health insurance or a big fine.

I don't think it matters much. The federal budget deficits will be structural if this goes through. They'll try to tax us to death to try to close the gap, but that will only drive more small businesses out of business, creating more job losses, and drive tax revenues down in a death spiral.

As foreigners lose confidence in the U.S., the dollar will continue to collapse. Eventually investors are going to start demanding much higher interest rates to lend to the government, which will push market based interest rates up, which will cause another wave of business failures and layoffs. With the tax base continuing to shrink, and interest rates rising, evenutally the burden of making interest payments and honoring entitlements will be too much. Eventually, the government will default on the debt.

Far left radical and multi-billionaire George Soros is on record saying the system has already failed, we just refuse to acknowledge it. He is reportedly massively shorting the dollar in anticipation of the ultimate collapse. We learned recently he has made at least 4 visits to the White House in 10 short months. I wonder what they're talking about?

The powers that be will be able to hold it all together for a while. But this massive out of control government borrowing and spending practically guarantees it all comes unglued sometime in the future. I don't see a way out. They've dug the hole and they just keep digging it deeper. And because U.S. government debt is so widely distributed around the world, when the U.S. government defaults, the entire global system will come down. The only question is when it will happen, and what the New World Order George Soros is planning with the global elites will look like.

Enjoy your socialist utopia, and your health insurance, while it lasts.

You need to show the income by age demographics. Your argument loses validity when you demonstrate that the largest emerging segment of low income houses is with retirees. Don't you think such data is an important and responsible part of this debate Professor?

@Kimberly – No I don't think it is necessary to break out the data by age group. The thesis is that the implicit marginal rate is a deterrent to working to earn extra dollars, which presumes a working age population. And I would be curious to see the source for your assertion that "the largest segment of low income houses is with retirees," not that it matters to the analysis.

Great post. Will fit in nicely with some ideas I'm working on. Thanks.