The days of the hateful BDS ideology going unchallenged on campuses and in academic organizations are over. 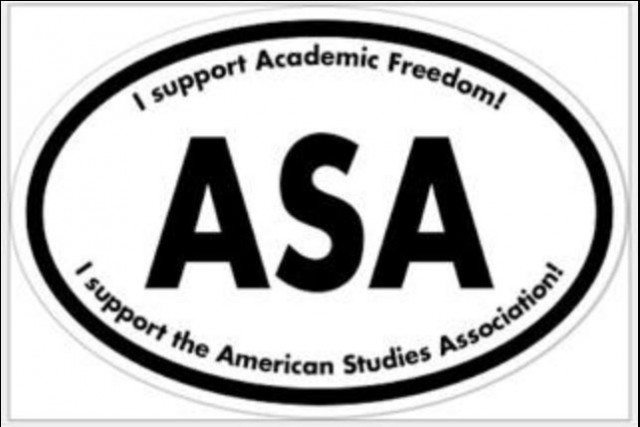 [Featured image above from Facebook page of anti-Israel academic boycotter.]

The anti-Israel academic boycott by the American Studies Association has given rise to a massive pushback from a broad range of American civil society, including from over 180 university presidents (as of this writing), leading university and faculty organizations, other academics, and columnists far and wide.

Politicians also are getting involved, with a congressional letter denouncing the boycott circulating and proposed legislation in New York.

On top of that, based upon sound principles of the law of charities and the facts, I have challenged ASA’s tax-exempt status. The Israeli Law Center has served notice that it believes the boycott is unlawful discrimination.

The isolation of ASA and the academic boycotters is nearly complete outside their anti-Israel bubble.

Early on I noted that ASA and the academic boycotters were setting themselves up as victims of this pushback.

That was evidenced almost from the moment the boycott passed, when the boycotters threatened legal action against critics in academia on the ground of unspecified threats and attacks.  There also was a statement issued complaining of harassment and asking for help from other academics.

Yet the only evidence the boycotters pointed to specifically were comments on the ASA’s Facebook page. But I downloaded those comments and posted them in a pdf. The comments were highly critical, but I did not see threats of violence or other unlawful action.

The claim of victimhood was evidenced in an Emergency Resolution filed this weekend at the Modern Language Association Annual Meeting, asking the MLA to denounce “attacks” on ASA. 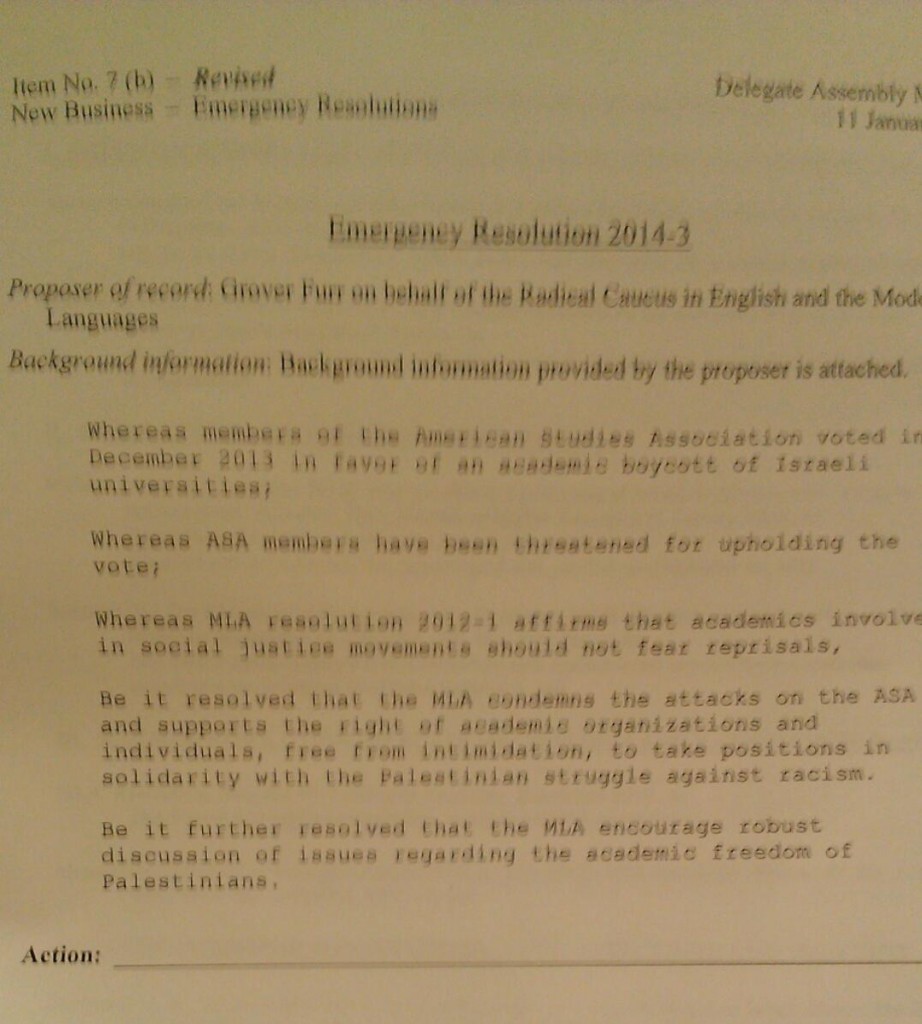 The Resolution was introduced at the MLA Meeting on behalf of MLA’s “Radical Caucus” (yes, there is such a thing) by Grover Furr, a Professor at Montclair State University who denies that Stalin committed even one crime or killed millions. Seriously, see this Video and Ron Radosh’s account.

Furr is a defender of Stalin (perhaps one of the last remaining on the left), a retailer of disgusting allegations of Zionist complicity in the Holocaust, and a critic of non-violent protest (BDS is apparently too soft for him). Don’t take my word for it. He says it all on his own website here and here.

In a severe blow to BDS advocates, only 41% of the delegate assembly voted to send the Radical Caucus resolution to the floor for debate. This fell far shy of the 75% requirement to consider an “emergency resolution.

Despite delegate refusal to even debate the resolution, the chair of the session assured the Professor Furr that his resolution would still be referred to the MLA’s Executive Committee for consideration.

The chair who chose to circumvent the delegate assembly is Margaret Ferguson, professor from UC Davis. She is a public supporter of BDS and the US Campaign for the Academic and Cultural Boycott of Israel.

Don’t expect this campaign to portray the boycotters as victims to stop.

The Featured Image above is from the Facebook Page of Prof. Cynthia Franklin, one of the most outspoken and vigorous ASA supporters of the academic boycott.

But irony was not the intent.  The intent was and is to delegitimize criticism of the academic boycott.

If the ASA boycotters are receiving unlawful “threats,” they should file criminal complaints or commence legal action under anti-stalking or similar laws. Or they could call out those making the threats by name.

But unlawful threats do not appear to be what is at issue.

Rather, it appears the boycotters cannot withstand the withering criticism from American civil and political society.

The academic boycotters have lived for too long in a bubble in which their views predominated because students were too intimidated to speak up, other professors didn’t want to take on single-issue fanatics, and administrators were intimidated.

But we are not intimidated. As I stated before, this is the hill we will fight on. Lawfully. Intellectually honestly.  And without allowing the academic boycotters to play victim.

The days of the hateful BDS ideology going unchallenged on campuses and in academic organizations are over.

That’s not a threat. It’s a promise.

Update 1-13-2014: Embedded below are the materials handed out by Prof. Furr in support of the Emergency Resolution. Note that the materials as to the “attack” on ASA do not include any evidence of unlawful threats. Most of the materials are from the anti-Israel Mondoweiss website:

Academic freedom to engage in bigotry and antisemitism, and to cry when decent people say so.

Lefties view the world through one of those one-way mirrors you see on cop shows. The problem is, lefties think they’re looking through the window side, when in fact they are looking at their reflection. The injustice, hatred, intolerance, and racism they detect is their own.

Out of the mouths of knaves.

This kind of thing has happened because of the last few decades’ pushing of affirmative action and multiculti alternate studies. People completely off their rockers, and mediocrity at its finest.

…The chair who chose to circumvent the delegate assembly is Margaret Ferguson, professor from UC Davis. She is a public supporter of BDS and the US Campaign for the Academic and Cultural Boycott of Israel….

…Her areas of interest include Renaissance literature, literacy studies, and feminist theory… a member of the advisory boards for Boundary 2: A Journal of Postmodern Literature, Differences: A Journal of Feminist Cultural Studies, Journal for Early Modern Cultural Studies… Her MLA projects include chairing a new subcommittee of the Executive Council on “K-16 Education”…

Her current book project is on “Cultural Debates About Hymens in Early Modern England, with an opening chapter on ancient Greek and Hebrew concepts of “virginity” and an epilogue on the modern surgical practice of “hymenoplasty”… in the fall, she is teaching English 232, a graduate seminar on “Gender, Genre, and Sexuality in Early Modern English Literature.”

ASA just gave the word sissy a whole new definition in my book.
I’m glad they have a quantum particle idea of what it’s like to be Jewish or Israeli.

I’ve read somewhere that humanities majors are now roughly 7% of the average university or college campus. That nearly 90% of humanities graduate students will not be able to find an academic or near-academic position in their chosen field.

Yet we keep the humanities divisions in universities going strong, refusing to downsize them to conform to reality.

And folks like Dr. Ferguson thank us for it.

One of the better solutions to the ASA/MLA folks would be to right-size their graduate programs on campus to reflect the numbers of students required in each speciality for the future. Then perhaps folks like Dr. Ferguson would be busy enough justifying the need for them to stay on campus to indulge in nonsense like BDS.

The Bigots of ASA Demand Freedom From Criticism For Their Anti-Semitism | Daily Pundit | January 13, 2014 at 8:59 am

“The Resolution was introduced at the MLA Meeting on behalf of MLA’s “Radical Caucus”” as opposed to normal academic discourse.

“Whereas MLA…affirms that ‘academics’ involved in ‘social justice’ should not fear reprisals,”

They are assuming a lot here: Academics? Social justice? Reprisals?

Does “Social Justice” now include social-academic apartheid? Instead of engaging in conversation with the parties that some of the MLA members disagree with they choose to politically cut off their microphone via boycott, segregation and discrimination using reprisals of their own making. This tells me that the MLA wants to deny Jewish academics and those who would learn from them the right to the free exchange of ideas, of speech itself. Where’s the “social justice” in that?

This resolution is a resolution, a plea, for someone to advocate for their whining and cowardly behavior in the face of dissent. This is an advance intellectual suicide note from ‘academics’.

“Radical Caucus”: “radical” is a term used most often in a political context and not in an academic context.

And without allowing the academic boycotters to play victim.

Play victim? The whole point is to make them be victim. Yes, scream ‘victim’ because you are, until you’re dead. I meant to say just now, until your obsession is discredited.

Nothing new here. Leftists demand to be heard anywhere, anytime, about anything (see #Occupy). And they demand to be free from any criticism (see Obama). The idea that any Leftist would say “I disagree with what you are saying, but will defend to the death your right to say it” is not only laughable, it’s insane.

Professor Jacobson, thanks for keeping this issue in the “light”. The list of universities and colleges will come in handy when choosing schools for my for my children. Those universities and colleges that allow bigotry will be black-balled by my family. I hope that those school’s presidents and administrations are happy with the path they allowed. Life can be a double-edged sword.

[…] is a rea­son why these guys push­ing these things always seem to be anti-​western. It’s not a coin­ci­dence that you have a defender of Stalin push­ing this boy­cott of […]

What more would it take to clarify that the boycotter is not the victim?

In late [28th of] February 1933, teachers at Berlin University received a letter …. sent by eight university teachers …. called on their colleagues to sign the statement “in the belief that science and culture must be the pillars of any endeavor to raise Germany up.” In supporting these principles, the undersigned embraced the politicization of the education system.

[O]n April 7, this politicization found radical expression in the “Law for the Restoration of the Professional Civil Service,” which led to the complete exclusion of Jewish professors from universities.

[Read in German] “Declaration of Teachers at Berlin University,” 28 February 1933 — Donated by Prof. Peter H. Plesch in memory of János and Melanie Plesch —

In 1927 Plesch was appointed professor of internal medicine at the Charité University Hospital in Berlin. Although he had converted to Catholicism in 1909, he was considered a Jew under Nazi laws and banned from his profession in April 1933.

Thank you for noting this. I’ve two English degrees and have watched their value steadily decline because of these creatures.

My undergraduate school, Whitworth University, a middling Presbyterian private college in Spokane, WA has never protested the Church’s attempted anti-Israeli boycott/divestment efforts, has given tenure to a vocal anti-Semite, and on and on.

What is most striking is that this formerly staid institution has increasingly hired and tenured professors of the smirking class.

The MLA ran with Houston Baker when I first came out of the North Idaho woods. I thought him a shocking idiot then and the outfit ain’t got no better.