“Colleges should not use taxpayer funds to support boycotts, resolutions or any similar actions that are discriminatory and limit academic opportunities.” 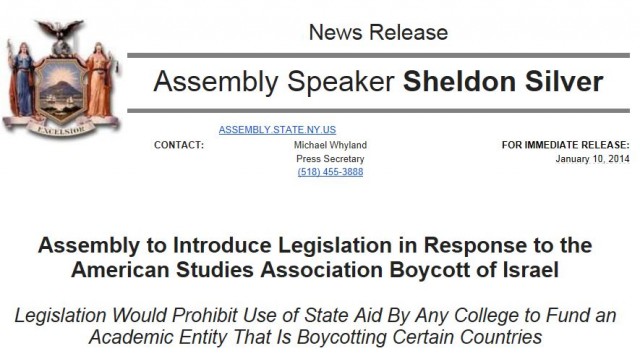 We previously reported that NY State Assemlyman Dov Hikind intended on introducing legislation in response to the academic boycott of Israel.

Now it looks like it will move forward, as Speaker of the Assembly Sheldon Silver (arguably the most powerful politician in the state) has issued this press release (h/t Eric Owens, Daily Caller):

Assembly to Introduce Legislation in Response to the

In response to the American Studies Association’s boycott of Israel and its academic institutions, Assembly Speaker Sheldon Silver today announced legislation (A.8392) to prohibit colleges and universities from using state aid to fund any academic groups or associations that have passed resolutions or taken official actions to promote discriminatory boycotts.

“Actions such as the American Studies Association’s discriminatory boycott of Israel and its academic institutions are a blatant assault on the academic freedoms that New York and its students have come to hold dear,” said Silver. “Colleges should not use taxpayer funds to support boycotts, resolutions or any similar actions that are discriminatory and limit academic opportunities.”

In addition to prohibiting the use of state aid by a college to fund an academic group – such as the American Studies Association — if that group has passed a resolution or taken an official action to boycott certain countries or their higher education institutions, this legislation would also prohibit a college engaging in such activity from using state funding to pay membership dues to the association or to reimburse travel or lodging for an employee attending any meeting of such an association.

Colleges violating the ban would not be eligible for state aid during the academic year in which the violation occurs.

The measure applies to those countries hosting a higher education institute chartered by the Board of Regents. The Board of Regents charters institutions located in Israel, Lebanon, the Czech Republic and Hungary.

Expect hard pushback from universities in the state, which will see this as an infringement of their own academic freedom.

Coming on the heels of a Congressional letter expected to be released soon denouncing the boycott, this now has gone from the academic to the political forum.

A shift to the political arena was inevitable, as I wrote several weeks ago, because the academic boycott is a political act.

Is there anything in the world the NY legislature doesn’t think it needs to pass a law to regulate? Or tax?

And why isn’t Sheldon Silver in jail?

If the NY State Legislature is for it, I’m against it.

“Expect hard pushback from universities in the state, which will see this as an infringement of their own academic freedom.”

The concept of academic freedom was originally intended as a dodge to prevent college administrations and department heads from firing communist professors. You know, protect the muzhiks from oppression and exploitation by the kulaks, etc. As usual, the real kicker was that the communists weren’t the least bit interested in “academic freedom” of the sort that a typical American would assume from the simple meaning of the term.

That was a while ago, of course, back when blatantly communist professors were relatively rare.

Indoctrination U: The Left’s War Against Academic Freedom and The Professors: The 101 Most Dangerous Academics in America by David Horowitz

Ivory Towers On Sand: The Failure of Middle Eastern Studies in America by Martin Kramer

(The War Against Boys: How Misguided Feminism Is Harming Our Young Men by Christina Hoff Sommers)

So, Shelly Silver is good for something after all. Pass the bill and go straight to jail, Sheldon.