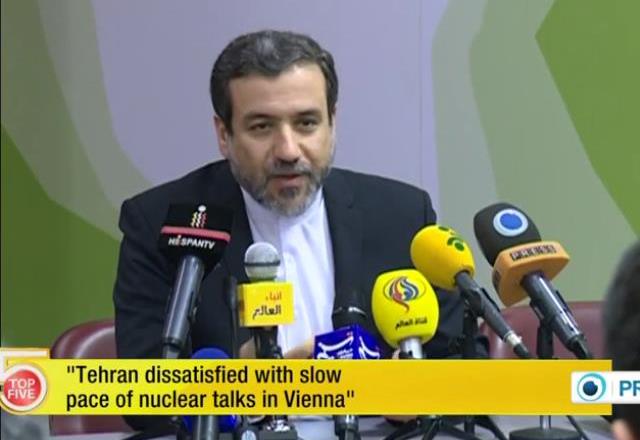 I wrote that the previous agreement between the West and Iran should be used as a model for predicting how the ongoing P5 + 1 negotiations will go.

In the coming months when Iran and the West have a dispute over the meaning of terms of the Geneva deal or the discovery of something suspicious in Iran, Iran knows that it can bluff its way out of suffering any consequences for its bad faith.

Last week the Treasury Department designated a number of companies and individuals for their illegal trade with Iran.

“The Joint Plan of Action reached in Geneva does not, and will not, interfere with our continued efforts to expose and disrupt those supporting Iran’s nuclear program or seeking to evade our sanctions. These sanctions have isolated Iran from the international financial system, imposed enormous pressure on the Iranian economy, and motivated the Iranian leadership to make the first meaningful concessions on its nuclear program in over a decade,” said Under Secretary for Terrorism and Financial Intelligence David S. Cohen. “Today’s actions should be a stark reminder to businesses, banks, and brokers everywhere that we will continue relentlessly to enforce our sanctions, even as we explore the possibility of a long-term, comprehensive resolution of our concerns with Iran’s nuclear program.”

The Iranian reaction was predictable.

“The U.S. administration has been recently making efforts to prevent the Senate from imposing new sanctions on Iran, and on the other hand they blacklist a number of additional companies under sanctions,” Araqchi stated. “This double game and indecision is not to the benefit of the negotiation atmosphere and is against the spirit of the Geneva agreement.”

“We are evaluating the situation and will react accordingly,” said Araqchi, the Iranian deputy foreign minister who was heavily involved in the nuclear talks with the 5+1 group (the five permanent members of the UN Security Council plus Germany).

Another Iranian official said, “The responsibility of the consequences of the imprudent measures rests with the U.S. government.”

The Geneva agreement prohibited the West from imposing new sanctions against Iran. Treasury’s action last week, however, was an attempt to “enforc[e] our sanctions regime and to expos[e] the Government of Iran’s (GOI) efforts to use deceptive practices and front companies to further its nuclear program.” In other words it was reinforcement of existing sanctions and well within the letter of the Geneva agreement.

Of course, Iran is upset. The Geneva accord was pretty much one that forgave past Iranian violations. Araqchi and his bosses are upset that the United States Treasury Department still finds its practices “deceptive.”

Given the importance the administration attached to the Geneva agreement, one would assume that an Iranian walkout would be big news. The New York Times had a single long paragraph on the walkout.

The Wall Street Journal had a substantive article, Iran: Move Puts Nuclear Deal at Risk (Google search terms). This is the key sentence:

The move didn’t violate the interim agreement, though some in Iran angrily alleged it did.

Of course that’s not the whole article.

A chorus of influential Iranian officials, from moderate diplomats to conservative parliamentarians and hard-line military commanders, said Iran would be re-evaluating its position in response to Washington’s actions.

Some called for the government to pull out of the interim agreement reached in November. It gave Tehran limited sanctions relief in exchange for suspending some aspects of its nuclear program that the West suspects are aimed at producing a weapon.

So Rouhani’s getting into trouble for being too moderate. Unfortunately that’s the main focus of the article.

The Washington Post and New York Times had other articles, but not about the walkout.

The six-month interim nuclear deal, which will go into effect Jan. 15 and expire in July, will make about $7 billion of Iran’s own currency available to the Islamic republic — a small fraction of the country’s assets that are currently frozen abroad. But even modest economic improvement and the reversal of years of punitive measures taken against Tehran by other nations will likely open up political space for Rouhani to broker a more lasting nuclear agreement.

In other words, give Rouhani space.

For Mr. Rouhani, a self-described centrist who was elected on a promise not just of solving the nuclear crisis but also easing restrictions on personal freedoms, the calls for the men’s release are posing a major domestic test. While not wanting to disappoint his reformist supporters, he also needs to be careful not to more thoroughly alienate powerful hard-liners who have already started to criticize his nuclear policy, which resulted in a temporary deal with the West. …

While hundreds of politicians, journalists and ordinary citizens were arrested in the violent suppression of the protests — and sentenced in televised, Stalinist show trials — the two former presidential candidates remained free. But after they urged their supporters to organize protests in support of the Arab spring movement in 2011, both men and Mr. Moussavi’s wife, Zahra Rahnavard, were placed under house arrest. Since then only direct relatives have managed to contact them.

But the surprise election of Mr. Rouhani in June and the temporary nuclear agreement between Iran and world powers have changed the political dynamic in Iran, giving room to long-silenced voices to ask for domestic changes.

In other words, allowing Rouhani’s success in his negotiations will free up Iran.

It seems that little of the reporting focuses on Iran’s trustworthiness or the likelihood that Iran is pursuing nuclear weapons. The reporting we’re seeing is more about the political machinations in Iran.

To be sure, there are competing factions in Iran. After the disaster of Ahmadinejad, clearly Supreme Leader Khamenei wanted a more accommodating West to open up the economy. So Khamenei engineered the election of Rouhani, a regime insider who could be passed off as a “reformer” or “moderate.” Naturally, being out of power, the harderliners are upset and will attack Rouhani. But that doesn’t mean that Rouhani views America as any less of any enemy than Khamenei does or that Rouhani is any less devoted to developing an offensive nuclear capacity.

Of course, as even the initial reports about the Iranian walkout acknowledge, Tehran will soon return to the table. Why not? Every time they sit down with Americans they win. But by sending this not-too-subtle warning they have also reinforced the president’s point about the Iranians running away from diplomacy at the least provocation. Rather than responding to this provocation by reminding the Iranians they are the ones who benefit from the Geneva deal, the U.S. and its European partners are predictably adopting a supine posture. They are clearly more worried about offending the Islamist tyrants than they are in making it clear that they mean business about stopping their nuclear project. While the Iranians made no bones about the fact that they had been ordered home, Western sources were trying to paper over the disruption and to pretend as if there was no problem.

No doubt, this incident will soon be forgotten as the Iranians eventually come back to the table more certain than ever that the Americans are easily pushed around.

Tobin suggests that Congress go ahead and have sanctions ready for when the next round of talks will almost certainly end inconclusively in July. As he notes, the Obama administration wants these talks a lot more than the Iranians do.

If I have a quibble with Tobin it’s that he argues that the Iranians are playing Obama. I don’t agree. Obama is being played because he wants to be played. As the President reminded everyone last week at the Saban forum:

Essentially what happened — and we were very clear and transparent about this — is that from the time I took office, I said we would reach out to Iran and we would let them know we’re prepared to open up a diplomatic channel.

President Obama here was trying to defuse the revelations that the administration had held secret talks with Iran. But what’s important is his declaration that he has always wanted to “reach out to Iran.”

And as Barry Rubin astutely noted in 2010, “it is now clear that the U.S. government isn’t going to take strong action on the nuclear weapons issue.”

So the Iranians can go back to their old strategy. Negotiate as long as things go their way and walk out when things don’t. They know that the West, led by the United States, wants to be their friend more than anything.

It was predictable that Iran would walk out.

It is predictable that it will continue to do so in order to get the West to agree with its terms.

The very last, asterisk marked, line in the offical agreement text, within the footnotes, says simply and clearly:

* With respect to the final step and any steps in between, the standard principle that ˈnothing is agreed until everything is agreedˈ applies.

In other words, from day one this was a meaningless agreement.

The history of Israel has shown us how futile it is to try to deal with Islamic entities.

Islam is Islam. It exists for itself and is a perpetual witness against itself.

“The Geneva agreement prohibited the West from imposing new sanctions against Iran.”

I am no supporter of Iran, but I have to say that if I were them, I would be confused and annoyed too. I could swear that’s what Kerry said.

Of course, Iran will also use this hemming and hawing as an excuse to sow their own special brand of obfuscation.

I thought that, in the next 6 months, there would relaxation of sanctions instead of what is quoted above.

To my feeble mind, it’s just a good example of the lousy leadership coming from our executive branch. They have NO backbone.

Wow. I never thought to find someone who would make the old Soviets seem reasonable.

There are existing UN Security Council Resolutions on sanctions to which all of the parties to these “negotiations” are legally subject, and they specify the sanctions will NOT be lifted until all enrichment is STOPPED. One also demands work on the plutonium reactor stop as well.

Absent Iranian compliance, which they asset they will never do, what authority does Obama, the USA, or the other P5+1 nations have to alleviate those sanctions?

And in relaxing or abolishing them outside the UNSC framework, will they forever destroy any remaining effectiveness of the UN?