Iranian President Hassan Rouhani has duped us once already

Iranian President Hassan Rouhani has duped us once already

Hassan Rouhani once concluded a nuclear deal with the West. Don’t get fooled again. 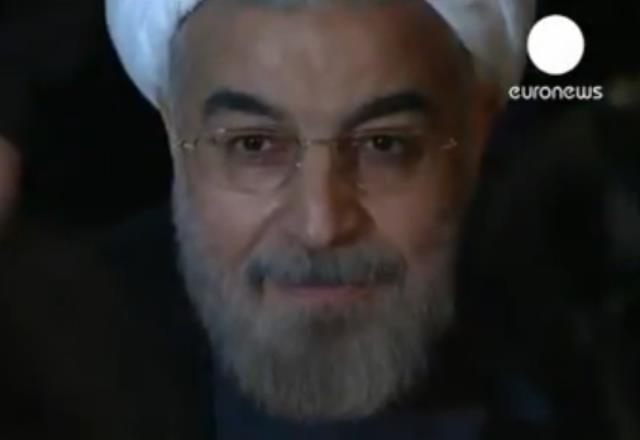 Aside from the specific problems with the potential deal between the so-called P5+1 and Iran (and the way it’s reported), there’s a historical precedent that’s troubling.

One of the reasons many in the West saw Iranian President Hassan Rouhani’s election as a harbinger for rapprochement with Iran was because when Rouhani was Iran’s lead nuclear negotiator a decade ago, the West (specifically Britain, France and Germany) and Iran reached a deal.

Here’s how the Financial Times described what happened: “Western governments will welcome Mr Rohani as a leader they can deal with – it was under his watch as chief nuclear negotiator that Iran had temporarily suspended its uranium enrichment a decade ago.” Similar sentiments have been “reported” elsewhere.

If that’s the reason to be hopeful for an agreement with Iran, it’s even more of a reason to suspect Iran’s motives now that Rouhani’s in charge of the country.

In 2006, Rouhani boasted how he had duped the West. It was a boast that he repeated again in an interview before the elections in Iran earlier this year, Rouhani was anxious to show that he was not too moderate to lead the country.

Far from honoring the commitment, in which Iran said “it has decided voluntarily to suspend all uranium enrichment and reprocessing activities,” Rouhani told the interviewer that all Iran did was merely suspend “ten centrifuges” in the Natanz enrichment facility. “And not a total suspension. Just reduced the yield.”

Unimpressed, interviewer Abedini asserted that work had been suspended at the UCF — the Uranium Enrichment Facility at Isfahan. Quite the contrary, Rouhani countered, detailing the completion of various phases of work at Isfahan under his watch in 2004 and 2005. He went on to state proudly that the Iranian heavy water reactor at Arak was also developed under his watch, in 2004. …

Incredulous at the notion that Iran had bowed to international pressure and halted nuclear activities in that period, Rouhani asked the interviewer, “We halted the nuclear program? We were the ones to complete it! We completed the technology.”

The agreement of ten years ago, was not made in good faith. It was made to hold off the referring of Iran’s nuclear violations to the Security Council. So this was no idle boast to endear Rouhani to the hardliners, this is exactly what happened.

Although Tehran protested the September 2003 Board of Governors resolution, it was confronted with a clear threat that the Board would find Iran in non-compliance with its safeguards agreement and refer the issue to the UN Security Council at the next IAEA Board meeting scheduled for late November. Faced with this threat, Iran negotiated an agreement with the Foreign Ministers of the UK, France, and Germany (the EU-3), which was announced on October 21, 2003. In an agreed statement, Iran promised to fully cooperate with the IAEA to address and resolve all outstanding safeguards issues concerning Iran’s past nuclear activities and to sign the Additional Protocol and begin ratification procedures,while observing the requirements of the Additional Protocol pending ratification.Finally, Tehran announced a decision to‘voluntarily to suspend all uranium enrichment and reprocessing activities as defined by the IAEA.’

And this is what happened:

In February, the IAEA reported that Iran’s earlier ‘complete’ declaration of past activities had failed to provide information on Iran’s earlier research on advanced P-2 centrifuge designs and experiments with Polonium-210, which can be used to initiate nuclear explosions. The IAEA also reported that Iran failed to provide timely access to sites suspected of involvement in nuclear research, including a facility that was razed to the ground before IAEA inspectors gained access to the site. Despite the suspension of enrichment activities, Iran informed the IAEA in April that it intended to begin hot tests at the Esfahan uranium conversion facility to process yellowcake into UF6, and the IAEA found that production of centrifuge components continued, because, according to Tehran, it could not break contracts with private companies manufacturing the parts.

Iran, of course, claimed that the EU-3 changed the terms of its agreement, but a plain understanding of the agreement required Iran to come clean about its nuclear research, something it clearly did not do.
Eventually, the Iranian deceptions were referred to the Security council in 2006, leading to a resolution that said:

Noting with serious concern the IAEA Director General’s report of 28 April 2006 (GOV/2006/27) and its findings, including that, after more than three years of Agency efforts to seek clarity about all aspects of Iran’s nuclear programme, the existing gaps in knowledge continue to be a matter of concern, and that the IAEA is unable to make progress in its efforts to provide assurances about the absence ofundeclared nuclear material and activities in Iran,Noting with serious concern that, as confirmed by the IAEA Director General’s report of 8 June 2006 (GOV/2006/38) Iran has not taken the steps required of it by the IAEA Board of Governors, reiterated by the Council in its statement of29 March and which are essential to build confidence, and in particular Iran’sdecision to resume enrichment-related activities, including research anddevelopment, its recent expansion of and announcements about such activities, and its continued suspension of cooperation with the IAEA under the AdditionalProtocol

That’s how Rouhani’s term as nuclear negotiator went. Talks delayed the referral to the Security Council. By the time the issue was referred to the Security Council, Iran had gotten its centrifuges spinning and advanced its military nuclear knowledge.
Rouhani’s boasts confirmed that this wasn’t an innocent mistake, but purposeful deception: a tactic designed to allow Iran to improve its enrichment technology, while evading any consequences.
If in the coming weeks or months a deal is reached with Iran, who’s to say that history won’t repeat?
[Photo: onechannel01 / YouTube ]
More Sharing Options

Taqqiyah is a wonderful thing. It says of Muslims this: if their lips are moving, they’re lying.

For the U.S., Rouhani’s second boast is a boast too far.
Bye bye Iran. You are not to be trusted.

President Obama’s claim that Iran is disposed toward ending its nuclear standoff because of a legal pronouncement by its leader may be a hoax, according to a Middle East research group.

Some critics warn that Iran’s offer to hold talks over its nuclear program is a ruse, to stall for time while it finishes up the fuel enrichment process for an atomic bomb. Others say Iran is also hoping to halt attempts by Congress to strengthen U.S. economic sanctions.

But President Obama welcomed Iranian President Hasan Rouhani’s promise not to seek nuclear weapons and told reporters the negotiation offer was worth pursuing.

“I do believe that there is a basis for a resolution (because) Iran’s supreme leader has issued a fatwa against the development of nuclear weapons,” Obama told reporters.

But a Washington-based Middle East research group says there is no evidence such an edict exists.

“An exhaustive search of the various official websites of Iranian Supreme Leader Ali Khamenei turned up no such fatwa, either on his fatwa website or on his personal website,” according to the Middle East Media Research Institute, which tracks and translates news and official reports from the region.

MEMRI says the fatwa was first mentioned by Sirius Naseri, an Iranian representative to a meeting of the U.N.’s nuclear agency in 2005. It was later mentioned in 2012, in an opinion piece in The Washington Post by Iran’s then-foreign minister, Ali Akbar Salehi, and in Iran’s Mehr news agency by the head of Iran’s judiciary, Ayatollah Sadeq Amoli Larijani.

But MEMRI says it appears the Iranians were not telling the truth, according to its president, Yigal Carmon.

“It’s a whole campaign,” Carmon said. “They cannot deliver anything real, so they deliver a story about the fatwa but they don’t really have it.”

Khamenei has said multiple times since 2003 that nuclear weapons are un-Islamic, according to National Public Radio. But the United States and others say Iran is producing far more enriched uranium than is needed for anything other than the making of a bomb.

Patrick Clawson, director of research at the Washington Institute for Near East Policy, says the fact that the fatwa was never written down is irrelevant because Islam is a religion where oral rulings can be more important than written ones…

[…] Meanwhile, a significant and obvious cost of the Obama policy on Iran is that it will guarantee the opposite of what the entire world believes the P5+1 group is negotiating for:  a cessation of, and/or better international supervision over, Iran’s undesirable uranium enrichment.  As blogger and analyst David Gerstman summarizes it, the whole purpose of Iranian agreement to nuclear deals has always been to buy time for violating them: […]

[…] Meanwhile, a significant and obvious cost of the Obama policy on Iran is that it will guarantee the opposite of what the entire world believes the P5+1 group is negotiating for:  a cessation of, and/or better international supervision over, Iran’s undesirable uranium enrichment.  As blogger and analyst David Gerstman summarizes it, the whole purpose of Iranian agreement to nuclear deals has always been to buy time for violating them: […]

[…] has done that before: made an agreement, reaped the up-front benefits from it, failed to comply with it, slow-rolled […]