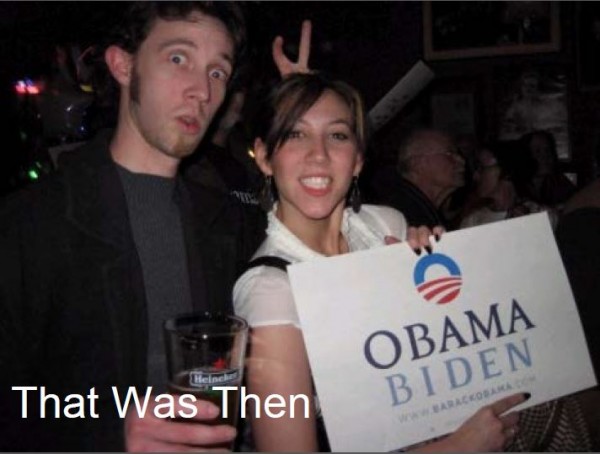 Obama is losing the youth at many levels, as we have reported this week:

The young Americans the Obama administration so desperately needs to help make the Affordable Care Act function are the ones most likely to believe the law is endangered, suggesting that sustained House Republican efforts to repeal and undermine the law are bearing some fruit.

More than half of 18-to-29-year-olds who were surveyed in the most recent United Technologies/National Journal Congressional Connection Poll say it is likely the law will be repealed in 2014, even though the chances of that actually occurring are remote.

According to the poll, 18 percent of respondents in this age group said it was “very likely” Obamacare would be repealed by Congress next year, while 33 percent said it was “somewhat likely” the law would be done away with. The survey has an overall margin of error of plus or minus 3.6 percentage points.

That has real-world implications. The administration has relentlessly wooed these so-called young invincibles—young, healthy Americans—to sign up to purchase health insurance through online exchanges. Those consumers, who tend to use health care services less frequently, are needed to subsidize the cost of treating older, sicker ones. Without their participation in large numbers (the target for next year is 40 percent of all new enrollees), premium rates for consumers in the exchanges could rise.

Although the poll pdf. linked above doesn’t give cross-tabs, according the National Journal the situation is particularly glum among African-Americans:

It also revealed widespread pessimism among African-Americans about the law’s future. A staggering 70 percent of those surveyed (in all age groups) believe it is “somewhat likely” or “very likely” the law will be repealed next year.

Sad trombones all around.

THESE ARE THE VOYAGES OF THE STARSHIP ‘PEASANTRY’

ITS FIVE-YEAR MISSION: TO EXPLORE STRANGE NEW WEBSITES, TO SEEK OUT NEW POLICIES AND NEW DOCTORS, TO BOLDLY GO WHERE NO PEASANT HAS GONE BEFORE.

Obamacare…. Proof that doing something really stupid is much worse than doing nothing.

Since over 80% of the country liked the former system, the smart money would have been to approach its known problems one at a time.

The arrogant elites will settle for nothing less than a complete makeover.

The Problem for Obama & Co. is that both of them are mocking the ObamaCare rollout.

Greg Gutfeld, naturally, but it’s been such a disaster that Jon Stewart couldn’t ignore it.

It would have to run perfectly from here on out for Obama to get some of their trust back. Fat chance.

As Breitbart said, and as I’ve always thought, politics is downstream of pop culture, especially with the young.

Just think… None of this would be occurring had not Chief Justice been intimidated by the little puppet emperor hand his Chicago cabal of miscreants.

An excellent and oft overlooked obvious point! I continually wonder what form that intimidation took. What does Roberts have in his past or what threat was so strong to compel him to write such a ridiculously illogical, unlawful and IMO unconstitutional opinion ?

I wonder how he can live with himself? Oh well, we, the unwashed, have to sacrifice.

Robert Caro’s (old but good) book about NYC ‘master builder’ Robert Moses notes how so much of Moses’ power resided in his ‘files’ he kept on every public official. He literally had something on everybody, as I suspect is the case with Roberts. It can’t just be about his legacy..

Stocks soared on Friday, with the Dow and the S&P 500 ending a five-day losing streak after a robust jobs report gave traders confidence that the economic recovery was gaining strength.

Analogy re: Obamacare from admin clerk in business next door from me, a 24 yr old, single, black female, paraphrased:

“It’s like they put up a new restaurant, advertised it for years, everything brand new, best restaurant ever, just wait and see, and on the night of the Grand Opening they couldn’t get the door open. Two months later, the door finally works and people are sitting down, ordering, waiting on their dinners, and they realized, “oops, we forgot to install any kitchen equipment or hire any staff.”

She finally gets it!

PRESIDENT OBAMA: By the way, Christmas time is no time for Congress to tell more than 1 million of these Americans that they have lost their unemployment insurance, which is what will happen if Congress does not act before they leave on their holiday vacation.

Meanwhile back at the White House:

The White House will not insist that an emerging budget deal include an extension of the unemployment benefits program set to expire at the end of the year, press secretary Jay Carney said on Friday.

Carney said that it would be “terrible to tell more than a million families across the country just a few days after Christmas that they’re out of benefits,” but that the White House was agnostic on how the extension happened.

You’re a bad banana
With a greasy black peel.

Dr.J.: Suggestion, if I may: Post an accompanying pic on this thread of a 20-something hand flipping the Finger.

Label it: THIS IS THEM NOW.