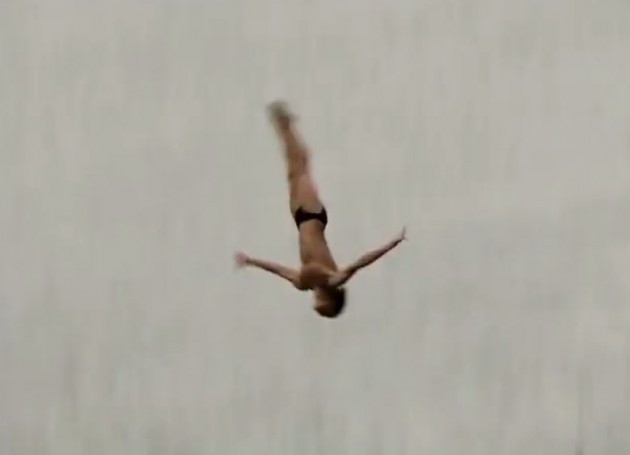 Yesterday we noted the precipitous drop in support for Obama among one of his stool legs, Harvard Survey: Obama and Obamacare push Millennials support off cliff

There is a certain poetic justice in the latest Gallup poll of presidential support.  Obama’s support has dropped the most among poor Hispanics and Non-Whites versus one year ago.

President Barack Obama’s job approval rating averaged 41% in November, down 12 percentage points from 53% last December, his high-water mark since his first year in office. Hispanics’ approval has dropped 23 points over the last 12 months, the most among major subgroups, and nearly twice the national average. His approval rating also showed above-average declines among low-income Americans, nonwhites, moderates, and moderates who identify with or lean toward the Democratic Party. 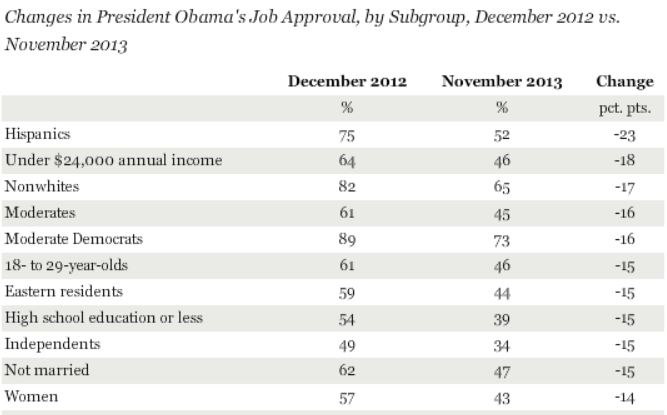 There is, however, one sub-group whose, er, support has only declined by 2%

Who exactly are the 5% of Conservative Republicans still supporting Obama?

Those who had passed out drunk on schadenfreude to be awakened by the Gallup pollster phone call.

It’s the same 5% who think Elvis is still alive.

Actually, Obama’s support amongst conservative Republicans has never wavered in the slightest from it’s previous levels ^^

That is, factoring in the margin of error in the poll.

If Obama resigns right now, there’s a good chance he could get Martin Bashir’s old job at MSNBC.

I had the same thought, but then remembered the Professor said “Conservative Republicans”. That leaves those RINOs at the bottom of the river.

You are right. I am both red-faced and glad that I do not have any more reading comprehension tests ahead of me.

Don’t feel too bad, Rick. Old habits are hard to break. It seems gone are the days of assuming Republicans are automatically conservative.

The only reasonable answer I can think of is it’s those misguided folks who believe it’s their duty to support the President to keep the Republic functioning, no matter what shenanigans he gets up to.

They probably supported Clinton during the Lewinsky scandal, and thought “Can you define the word ‘is’?” was a valid question.

Either that, or it’s a bunch of people – possible “Progressive” Liberals; who can say? – trolling the results by self-identifying to the pollsters as “Conservative Republicans.”

I have a former friend like that. According to her I must support a president even thought I disagree with him on every issue. She laughed when I tried to tell her he could end the nation as we know it because in her mind no one could ever do that,

Polls are pretty accurate if you ask “who are you voting for next Tuesday?” When it gets into issues and political philosophies, polling is not at all accurate because it depends entirely on the wording of the question.

For instance, polling regularly puts Americans who describe themselves as “conservative” at a 40% plurality. Yet when those “conservatives” are asked about entitlement reform, a majority oppose reducing benefits or increasing eligibility standards (like age) for anyone, including future retirees, even if necessary to save Social Security and Medicare. So just how “conservative” are they?

That’s probably the margin of error.

Not at all! Romney was the electable candidate! The GOP said so!

A 5% of Conservative Republicans that support Obama….Hum!

Democrats who misunderstood the question.

yeah, the 5% are lying liberals, or some maybe give the “clean articulate Obama” a “black gentleman’s C”, or maybe some that fear the NSA will pass their answer on to Lois Lerner types.

When people lose their doctor, have their plans changed, and their cost skyrockets … THEN things will get worse. Most of that is still just theoretical.

The phrasing on my BCBS notice was interesting … “we consider this to be a grandfathered plan”. Seems even they are not sure of the actual rules. Some parts of ACA still apply to my grandfathered plan (no lifetime caps), others don’t (like prenatal or birth control, I think). But they still keep jacking up the price. My never used high deductible plan has more than doubled since 2009. It will be $403/mo starting January.

But I’m still alive .. so “the system worked”. Thank You Obamacare.

For those that are confused about the 5% Republicans that support Obama, that is a no brainer. The is the group in Congress, the Senate and the Republican leadership. After all, they are doing everything in their power to support the clown.

I don’t believe these numbers . He has been out for the count before & ritalined back.

It’s sad and amazing that it took this much total BS to finally move the needle.

This poll on Obama approvals is screwy. Check out these categories from the same poll:

Conservative Republicans (as above) down from 7 to 5%, but…

Republicans down from 11 to 8%

I call bullshit on this poll.

A drop in Hispanic votes means almost nothing to the Dems. They will gain all that back when they make grandiose promises on immigration reform..and this time they mean it!

My only question on this poll is just wtf is a “Conservative Democrat”???

Individuals with a conflict of interest, who nominally identify as American.

Who exactly are the 5% of Conservative Republicans still supporting Obama?

People not smart enough to know what “conservative” or “liberal” is.

i’d guess Obama hasn’t lost pants crease enthusiast David Brooks, fried butter lover David Frum, and the blithering Kathleen Parker. Even Peggy Noonan has seemed to have woken from her stupor. So this 5% is probably east coast erudite upper crust “conservatives” that cringe at the pro-life and pro-gun crowds that make up most of the GOP base.

This precipitous drop in support for Barry Soetero, now that the reality of his policies is becoming known, illustrates how damaging (and treasonous) the media have been to our country. They have actively lied and otherwise failed to do their jobs with respect to this idiot marxist hack for going on a decade now. Too bad the media can’t be sued for E&O like real professionals can.