47% of Millennials would vote to recall Obama versus 46% who would not. 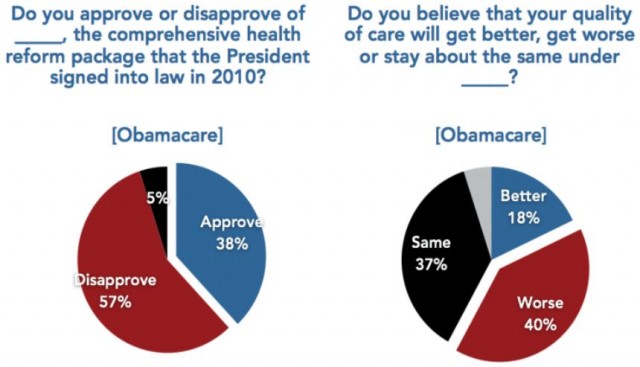 Havard’s Institute of Politics just released a devastating study showing a massive drop in support among Millennials for Obama and Obamacare.

Bottom line is that Millennials don’t like Republicans, but for the first time they don’t like Obama and Democrats almost as much.

Here is the key finding in the Executive Summary (at pp. 5-6):

Additionally, we found that a majority (52%) of 18- to 29- year olds would choose to recall all members of Congress if it were possible, 45 percent would recall their member of Congress (45% would not) and approximately the same number indicate that they would recall President Obama (47% recall, 46% not recall). 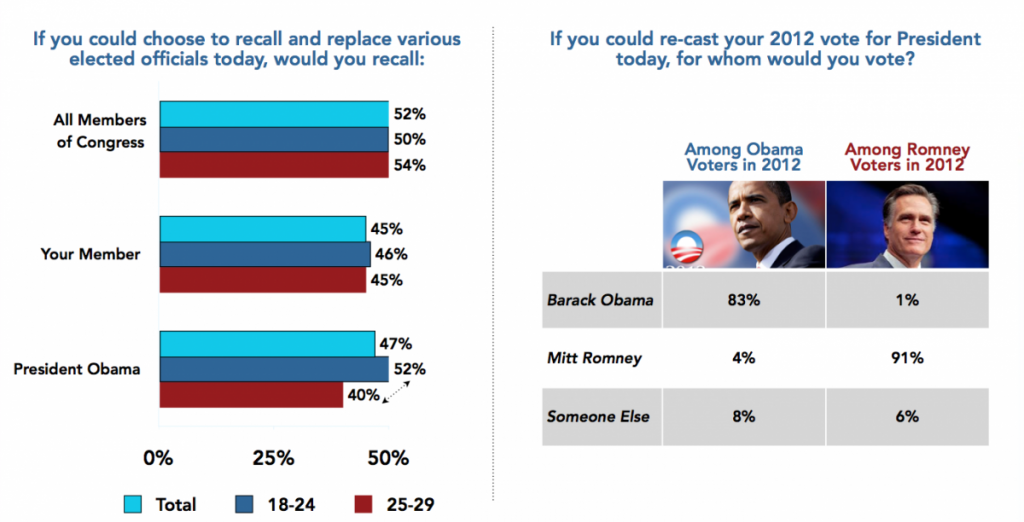 The trends lines are horrible for Democrats particularly among college age students, where the gap between Republicans and Democrats has narrowed significantly: 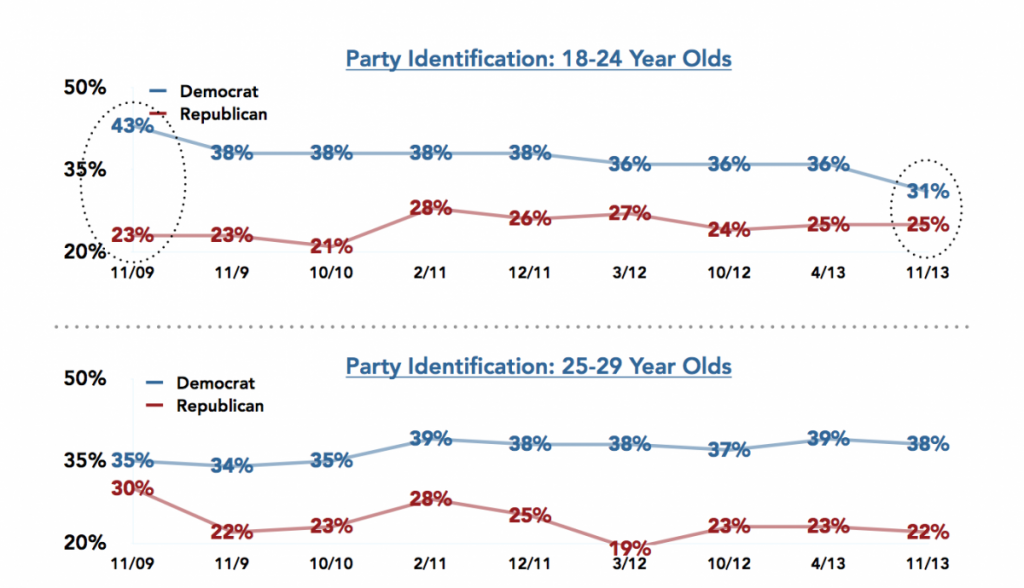 Support for Obama has cratered to the point that Millennial support tracks the general population: 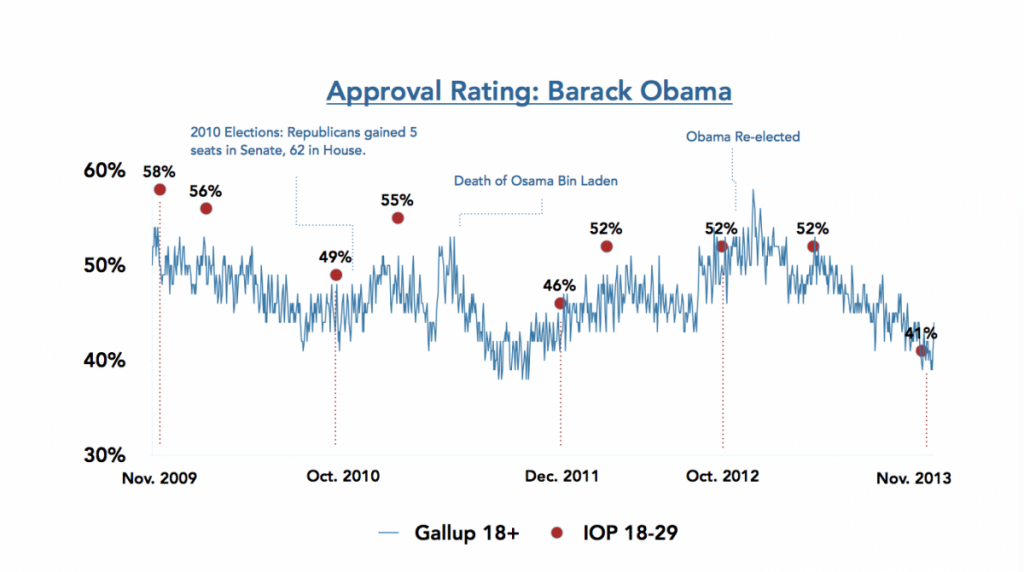 In what could be a harbinger of doom for the economics of Obamacare, the group the administration most needs to sign up actually hates the law, whether its called Obamacare or the ACA: 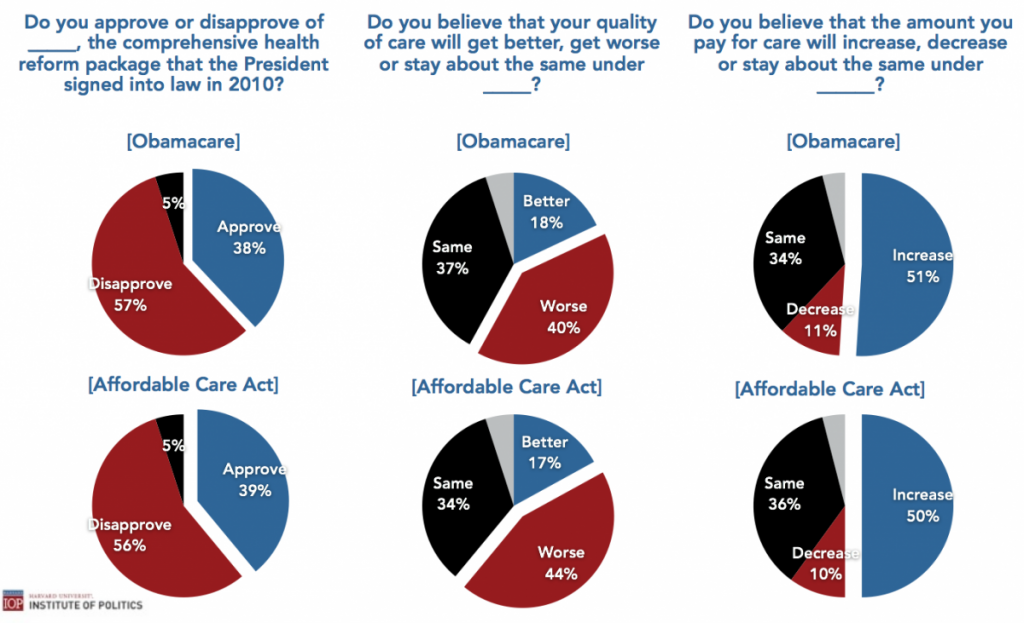 This video from Harvard IOP discusses the general findings:

The one recurring theme is most people seem to be completely satisfied with their congressional member – they just don’t like the others. In their minds, their member had nothing to do with the current situation. It’s all those other nitwits causing the problem. This is why incumbents keep going back.

At the end of the conversation — which touched on a myriad of topics, from piracy to Iran — Obama revealed what’s at the top of his bucket list post-White House: “At least I know what I want to do when I retire … host ESPN SportsCenter’s Top 10 list,” Obama quipped as he turned to Disney’s Robert Iger, whose empire includes ESPN.

It saddens deeply me that half a century after passage of the Civil Rights Act racism is not only alive and well, it is thriving among the young people of America.

The Obama thrill is gone among America’s millennials, those aged 18-29, just a year after they helped the president win a second term.

Damn those racist millennials.
Years of public school “brainwashing” down the drain. Once you make them cynical of government, they are lost forever.

The thrill is gone, as the finally figure out that they are the fall guys and gals, who are supposed to be paying for everyone else, at a time when full time entry level employment is drying up, also as a result of this legislation, and the rules the Administration the voted for promulgated. All because they voted for the cool guy, and not the competent one. As has been pointed out repeatedly by conservative pundits – actions have consequences, and the consequences to them of their election and reelection of Obama are doozies. And this doesn’t even consider the mountain of national debt put on their back as a result – likely because most of them just cannot comprehend the idea of getting old and still paying for their 2008 and 2012 votes.

All this kind of reminds me of the old saying, “If I new then what I know now,” last year’s election would have been a landslide!

Oh, there’s another crop of suckers coming out of highschool next year.

Honey, I Shrunk the Millennials’ Support.

…by digging into their wallet and affairs!

In other news, the Obama Administration’s attempt to distance itself from its signature legacy legislation – colloquially known as “Obamacare” – by referring to it by its proper legal name, the “Affordable Care Act” …

Actually, this study scares the heck out of me as a conservative. Just 1% of Obama young voters would reverse their vote to Mitt Romney? It means that the brainwashing they have received is far more effective than cold hard reality. Until that number moves significantly, we are toast as a nation.

The Millennials no longer believe in Obama Claus but they still watch a lot of Disney movies.

Poll question: “Should we impose a 150% sales tax on medical insurance?”

That is the rough equivalent of mandatory coverage for people with preexisting conditions.

The distortion is similar to the Universal Service Fund charges found on phone bills, to subsidize delivery to rural areas. Except that the magnitude of the distortion is huge for the ACA – and strategically hidden.

Demand that this tax be quantified and transparently itemized on every premium bill and noted in every sign-up offer. Demand also that changes in deductibles and the like caused by mandatory coverage for people with preexisting conditions be itemized and disclosed.

Poll question: “If Congress were to create a national sales tax should they exempt all medical related expenses?”

Anecdotal, but… while she was home for Thanksgiving from her sophomore year at UNC-Chapel Hill (liberal Valhalla), I asked my 19 yr old daughter and the same aged kid, also at UNC, who tagged along what they thought of all the Obamacare hoopla. Both said they’d tried to access healthcare.gov ‘just to see’ and were amazed at how bad a website it is, the worst they’d ever encountered. I asked if they’d ever accessed a gov website before, like DMV, IRS, etc.? Nope, never had, but acknowledged that the UNC website was no picnic (it’s a state university).

I asked if it changed how they looked at the Obama presidency. They both said it made them think about it for the first time, and that it sure didn’t look good. I tried to explain how Obamacare transfers their money to others, aka ‘wealth redistribution’, but they got that, ‘oh shit, dad lecture coming’ and bugged out on me.

Already alluded to in many articles, but these are the times when Obamacare moves from an abstract premise and promise, rhetorically decorated with gold dusted unicorns and fairies as it was, into a concrete, palpable reality, and the results aren’t spinnable. These kids are young, inexperienced, indoctrinated by public schools, and inherently idealistic, but they are not stupid. They’ll ‘get it’, most of ’em anyway.

The issue ultimately comes down to this: the young are disappointed in Obama, but they hate the GOP. The GOP is evil – that has been drummed into them all their life, literally. It will take a huge dose of reality to overcome that. In the interim they will continue to believe this will be fixed, if not by Obama, then by Hillary, because that is what they do best – dream.