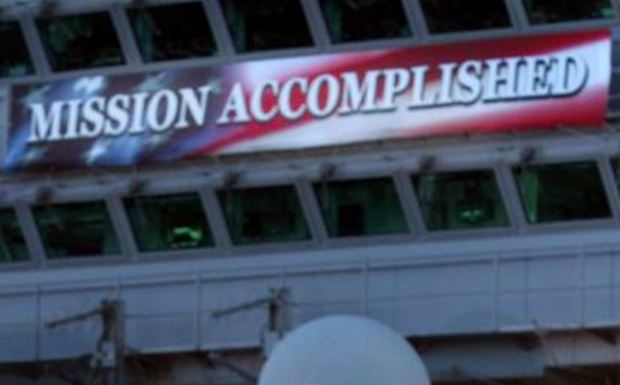 The Obama administration just announced that it has met the completely arbitrary, dumbed-down goals it set for healthcare.gov.

These goals were not what was supposed to exist on October 1, but what the administration believed it could meet and therefore met in order to declare the website fixed.  Operation Fixed Website: Feds will declare healthcare.gov fixed no matter what.

Is WH right or not? And how define VAST?RT @politico: #Breaking: W.H. says it achieved goal of making ACA … http://t.co/C0X6QRl8D6

as I said yesterday, watch in wonderment as the words "vast majority" are magically defined downward

Update: As usual, words of wisdom:

I guess it would depend upon what the mission was, eh?

TOTAL FAILURE was their goal…?

And now the Obamabots will crow about how this shows Obamacare is the wave of the future, etc, etc, blah, blah, blah, woof, woof.

Ignoring the fact that the website should have worked on 1 October and that the real problems are not on the website, but in the ACA law itself.

But they’ll ride this wave for a while, hoping to turn the tide to them.

For us conservatives, all this hoo haa just reinforces that the government needs to get the he!! out of the way. They have no business sticking their noses into the free market.

I would feel better about the future of our democracy if we had a press that was skeptical of all politicians and government officials.

Well, we have the metric that they are hyper-critical of about half of them.

So… That’s good, right….??? Or is that somehow just really bad? Feels like the latter.

I also think what this means is that more people will be able to download their sensitive faster for the benefit of both partisan bureaucrats and identity thieves.

How does this fix the Democrat lies? Can I keep the plan I like? No! Did our costs go down? No? The website working means nothing to make up for the outright lies told to us to pass this monstrosity.

The site’s not going to work. It won’t take payments, and it has no security worth speaking of.

They’re just calling it fixed. When people actually use it, they’ll find out the truth, no one will have to tell them it’s deficient.

It’s like the Sen. George Aiken [R-VT] solution to the Vietnam war: “Declare victory and leave.”

The White House seems to have never heard of the old adage that when you are in a hole, stop digging.

“Keep digging, boys. We can still see the sky.”

It’s all about buying time, a week at a time, while blame is projected and distractions are orchestrated.

Happened with Fox, too.

Opportunity here. Messiah says it’s fixed, ergo, it is so! The GOP should be running ads describing what you get with the “fixed” Ocare, i.e., no care, with a bonus of identity theft. And it don’t cost a dime!

Coming soon from a White House near you: “We’re sorry if folks thought that ‘fixed’ meant that they could sign up.”

P.S. I think “fixed” means like what they do to your dog.

Tomorrow is when most folks will attempt to log on. THUD.

No metric for increased cybersecurity?

When a secretive, lying administration says 80% or 90% or whatever number, how is one to check that? Exactly. And that is why they claim success – because it cannot be checked without their assistance. All it does is preserve the majority of their base, the most they can hope for at this point.

Ironic that Obama has done far more for the conservative cause than has the GOP.

Has anyone compared the odds of successfully obtaining health insurance via healthcare.gov with winning the lottery?

Whenever I hear the administration say that it has achieved one of its goals, why do I keep thinking of the guy who fired a gun at a barn door and drew bulls eyes around the bullet holes?