Mary Landrieu is an innocent victim of Obama’s unkept promises

Mary Landrieu is an innocent victim of Obama’s unkept promises

The Louisiana Purchaser has a reelection problem. 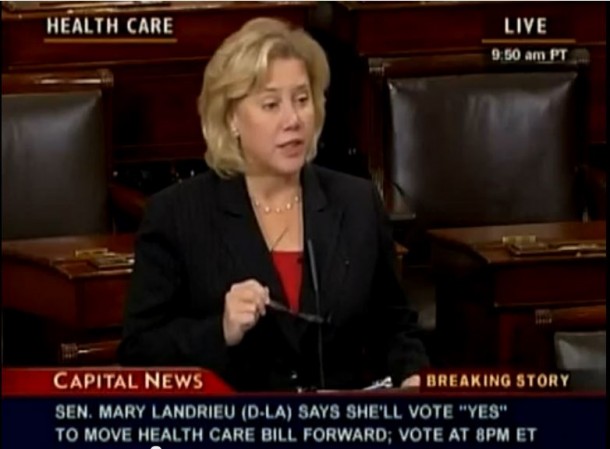 Mary Landreiu is inextricably tied to the passage of Obamacare. The most recent Louisiana Purchase was not about land, it was about securing Landreiu’s vote. She also voted against fixes proposed by Republicans to prevent people from losing their plans.

The problem for Landrieu and all other Democrats up for reelection in 2014 is that the Obamacare rollout has been a disaster, and not just as to the website.

Landrieu is getting hammered by ads throwing her own words back at her:

Landreiu’s apparent strategy is to try to thread a needle.

Landrieu’s first ad of the political season is damage control, an attempt to isolate the loss of plans and shift the blame to someone else, namely Obama (via Politico, h/t Townhall):

Expect this to be the new Democratic incumbent tactic.

Miss Piggy Landreiu is NOT “innocent”. She made her bed…

Agree she was incredibly smug, especially during the impending shutdown. I remember her adamant scoffs about how foolish Republicans were being because we had had “40 years to get this health care plan right”.

When you are a “victim” of your own arrogance you are far from innocent.

I think the professor is being sarcastic.

Readers/commenters are reminded to enable the sarcasm app in their respective browsers.

Mary-Mary, quite contrary how does your garden (if your family didn’t have a list on everyone in Louisiana) you’d be watching it grow.

The Louisiana Purchaser has a reelection problem.

I believe it’s the purchase who has the problem. The purchaser is still in office.

Dammit, that was supposed to be the purchasee.

Remember that scene in Full Metal Jacket where Gunny finds the jelly doughnut and tells Pile “They’re paying for it! You eat it!”. Democrats you on the Gunny for One Jelly Doughnut!

Landrieu: I only voted for it. That pesky Obama character is the guy who signed it into law. Please blame him. He’s not up for re-election.

Anybody remember waaaaay back when Landrieu ran for re-election last time? Remember? She was is trouble, and ran against her own voting record….but said she’d do it again…because it was the “right thing to do”, but was wrong-

Hell, it’s almost like “hey, if you insult my intelligence, you’ve go my vote!”

That video of her saying she’d vote for Obamacare again is going to come in very handy. Her opponent should save him/herself some time and money on commercials and just keep running that bit of video over and over and over again until election day.

I wish conservatives would do that all the time. No attack ads, no pushing grannies off cliffs, just make the Dems eat their own words over and over.

This is what is known (in my neck of the woods) as SHTF.

There are some who think it is a good example of being up the proverbial creek and lacking a paddle.

Watching the video, the first thing that comes to mind is the saying, “If you live by the sword, you die by the sword”. Obamacares version of Hari-Kari.

What Landrieu is doing is akin to pushing a man out an airplane and claiming to the police that it wasn’t her who killed the victim but the ground.

Landrieu should be hammered with her votes and statements, which were not only in lockstep with Obama on every issue, but downright insulting to those who raised the questions we now know needed to be asked.

Mary follows Reid and Obama around like a lovesick puppy, doing anything she can to please them.

She’d make a good purse dog – if she lost a good deal of weight, of course.

It should also be noted that her loyalty was bought and paid for with a few trinkets for her reelection effort, like a cheap whore on Bourbon Street.

At the end of her commercial, she says the result of her bill and challenge to Obama is that people get to keep their health care plan?

If her opponents want to continue to use her words against her, I would start right off with that in the next wave.

They get to keep their plan…for one more year. That was not the promise and she should be taken to the mat for trying to get credit for a stop gap measure that 1. delays the inevitable and 2. is very difficult for insurers to implement now that the plans are already cancelled.

“They get to keep their plan…for one more year.”

As one from this category, I don’t get to keep my former plan at all. Nobody does. Once cancelled, gone forever. They’ll write me a new one and I’ll pay far more for it. So, even this aspect of her ad is a lie.

[…] effective in masking the message to the middle land voters of the nation. Even as Democrats like Mary Landrieu and Mark Pryor are sinking in the polls, most of the talking heads will only focus on Steve […]

A few Democrats are mumbling that the Republicans started calling the ACA “Obamacare”. I’m scratching my head over that.

Are Republicans trying to badmouth Obama, or the ACA?

She, like all of her ilk, didn’t read the bill before they voted on it. They all need to be booted out of office.