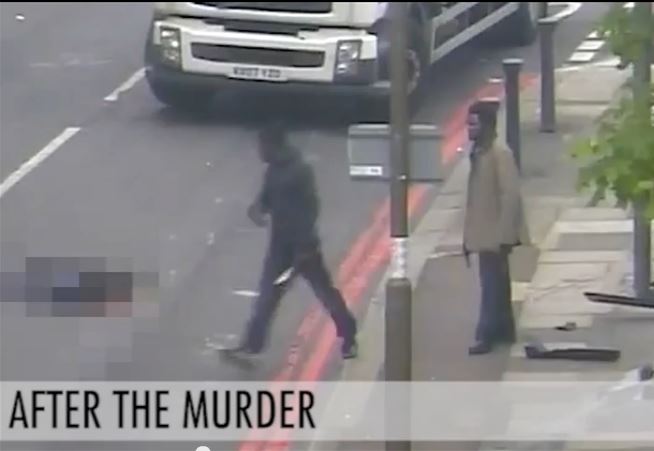 A jury on Thursday convicted two men who called themselves “soldiers of Allah” of murdering a British soldier who was run down with a car, stabbed to death and nearly decapitated in a brutal attack on a London street.

The jury of eight women and four men deliberated for just 90 minutes before finding Michael Adebolajo and Michael Adebowale guilty of murdering Fusilier Lee Rigby. They were acquitted of attempting to murder a police officer.

Both men had pleaded not guilty to murder, though neither denied taking part in the May 22 attack.

Neither defendant reacted as the jury foreman announced the verdicts. Adebolajo smiled and kissed a copy of the Quran as he was led down to the cells. 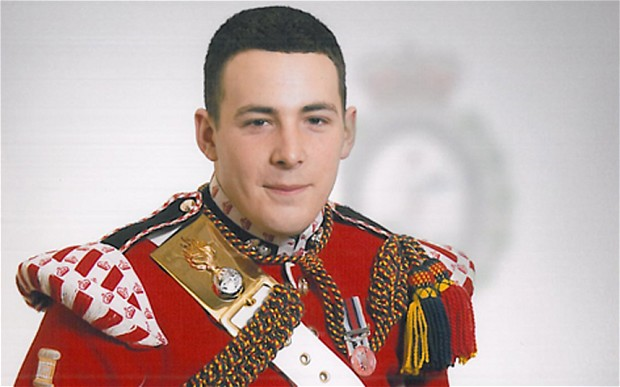 Here is a video timeline of what happened that murderous day:

But remember, this murder had NOTHING to do with Islam. Islamic scholar David Cameron said so and that s/b good enough for the rest of us. To even think that Islam might have had some teensy-weensy bearing in all of this, regardless of how tangential, will only demonstrate your utter and complete racism*.

Islam is…. well, I can’t say what I think about Islam because I would be banned.

Islam has within its core texts and throughout its history, in every Islamic national or group constitution, blatant racist hate, misogyny, violence, aggression, human rights violations aplenty. Islam should be banned from every civilized society on the face of the earth, along with Satanism and human sacrifice.

Gutter ideology invented by an epileptic madman frothing in the desert. No need to be shy.

Yeah. Tell that to Robert Stethem and Leon Klinghoffer while you are at it.

“I’m a soldier and this is war?” What bullshit. Notice these two “soldiers” had to run the guy over in a car FIRST, then, out come the knives and all the Islamic Warrior for Allah crap.
They didn’t have the balls to challenge him face to face, soldier to soldier, even when it was two against one.
Islamic chicken-shit pussies.
Hang’em both in Trafalgar square.

What would Henry the VIII do? WWH8D?

Hang, draw, quarter them, and spit their heads on pikes at the a Tower.

That sounds just about just.

Careful. Hippies and leftists (but I repeat myself) will read that as, “What Would Hate Do?”

Think we’ll hear any imam or whatever they have saying he warned the guys? Any imam or any friend or neighbor say they called the cops?
My guess is absolutely not. But if it happened, the cops were likely afraid of being accused of islamophobia and did nothing.

PC kills. In Britain and at Ft. Hood.

The Brits need to return to capital punishment and outsource the sentence – let the military wives handle the execution.

Strange that you should mention that little thing about ‘military wives’ since there is more than one culture in humanities past that would turn prisoners over to the older mature women to deal with as they wanted too. Depending upon the captured fighter and history of conflict, it could be a very bloody/painful sentence. American Indians would often do this – bad news for the European immigrant farmer and his wife, if the wife was still alive.

About these two Islamic warriors. I have NO PROBLEM accepting their word that they are warriors for Allah, my big question is why can’t the Brits also accept that statement? Also, what is considered an adequate sentence, twenty years in the government run hotel (aka prison)?

There is a ‘reason’ that 300 years ago prisons were houses of punishment and there were public executions. We hold ourselves up to standards that exceed our actual social patterns. These two things (who liberals like to call men) acted as animals and need to die an animals death.

Britain used to transport its convicts. Now they have to keep them there.

There is a true tale of the convicts transported to Tasmania . Things were so great there that they all wrote back suggesting relatives go steal something & get caught & also get transported out.

The governor of Tasmania heard about it & built Port Arthur ( extremely scenic location ) to show Tassie was indeed a punishment . If they could survive a few harsh years there then they could go & establish themselves anywhere on the island . Hence Tasmania today is very quixotic.

The difference is that those convicts also built beautiful buildings that remain today. These idiots have nuttin to offer. They are as dumb as bricks& less useful.

This sentence is the one that should prove all of those in the media and elsewhere who excuse terrorist actions as not a reflection on Islam.

“Adebolajo smiled and kissed a copy of the Quran as he was led down to the cells.”

And yet they don’t allow the likes of Pamela Geller and Robert Spencer in because THAT would lead to violence and hatred, unlike allowing Muslims in.

Don’t take this the wrong way but Great Britain deserves all the punishment it gets.

They did not let these 2 in . They were born there to ( still ) practicing Christian families .

England has always been a home for Africans . However they lucked in when Obama Snr chose America over Britain .

Don’t take this the wrong way .but America deserves all the punishment it gets .

http://www.answeringmuslims.com
British soldier Lee Rigby was murdered and beheaded on a London street by two Muslims. Prime Minister David Cameron and London Mayor Boris Johnson have assured the world that the attack had nothing to do with Islam. Yet the Qur’an clearly states that the penalty for “making mischief” in a Muslim land is death (5:33), and Rigby had served a tour in Afghanistan and was actively recruiting more soldiers for the British Army. How can Western leaders deny the obvious?