2nd Murderer of Lee Rigby offers no evidence in defense

2nd Murderer of Lee Rigby offers no evidence in defense 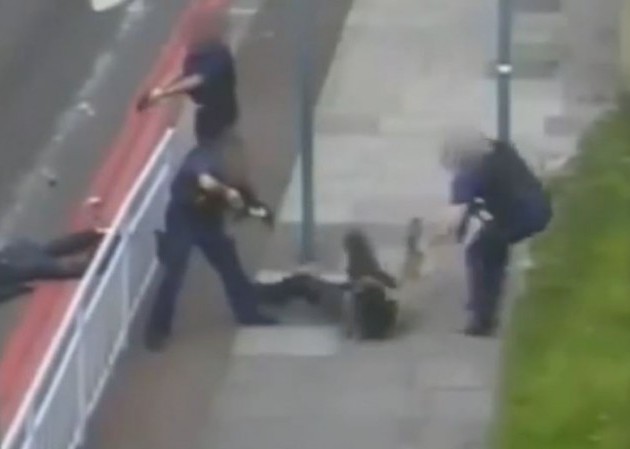 The murder trial of two Islamic radicals who hacked British soldier Lee Rigby to death on the street continues.

We noted how the murderer pictured in so many of the newpaper covers holding a bloody machete argued in his defense that he was a “soldier of Allah” and that he was in a war, Killer of British soldier Lee Rigby: “I am a soldier and this is war”

The second murderer decided to offer no defense evidence, as reported by the Daily Mirror, which has a live blog of the proceedings:

The second man accused of hacking Fusilier Lee Rigby to death has refused to give evidence.

Michael Adebowale, 22, was due to take the stand to explain the attack on the 25 year-old soldier near Woolwich Barracks in south London.

His co-defendant Michael Adebolajo, 28, has already told the court that he tried to decapitate Lee Rigby to protest against British foreign policy.

Abbas Lakha, representing Adebowale, told the court: “I call no evidence on behalf of Mr Adebowale.” …

The judge sent the jury of eight women and four men away for the weekend and told them the court will contact them by mobile phone when they should return to court.

He said there was more legal argument to sort out before closing speeches start but said the case was still due to conclude by Christmas.

Here’s video of his capture immediately after the attack:

These two need to be bound hand and foot, while having pig blood poured over them. They need to be forced to watch the pig killed in front of them so they cannot lie to themselves that it really isn’t pig’s blood. Then a hooker should be hired to fondle them while the masked executioner slowly severs their jugular veins.

All on video and uploaded with the message that none of them will see virgins or Allah.

Then send the corpses back to al-Qaida with the pig’s head inside the bodybag with them.

It doesn’t look good for Allah at this point.

And, British soldier Lee Rigby is with the true God

Isn’t the former United Kingdom one of the United North Sea Emirates now? After all, what these fellows did was sharia-compliant, so shouldn’t they be rewarded instead of penalized?

(Set browser sarcasm app to ‘on’ before responding)

Call me cynical but you cannot reason or persuade the followers of Allah or communism – they only understand force.

Perhaps these 2 murderers who claim to be “fighting in a war” will spend 27 years in jail, be praised by their comrades, organize additional murders while in prison and end up running a country when they get out of jail…

I live not twenty miles from Woolwich. I would just be satisfied with the right to talk openly about this unspeakable crime against a serving British soldier. He represents ME, he defends ME and my family. And yet we have been subjected to the rantings of these lunatics ad nauseam and what is even worse, to the broadcast of pleas by the Muslim community that they should not be held to blame for the incident & that they are worried about a backlash from British Society. No such backlash has occurred, in spite of attempts to document “hate crimes” which on inspection have proved to be a fantasy. No thought for the soldier & his family.

The reasons we cannot speak are:-

1. Onerous laws about “Contempt of Court” whilst a trial is underway.
2. The BBC provides seventy percent of the news in this country SEVENTY PERCENT. They have an agenda; Muslims “good” , Christians “bigotted” , White British “Racist” in a nutshell. This agenda causes them to shape the news to fit. So there is no mention of incendiary imams allowed to recruit useful idiots such as the accused. No concern about half a million immigrants every year into our small Island (only about half that net). Every concern about the Muslim community but no thought given to the “natives”. No ordinary Brit has any chance of getting his concerns aired on the BBC. Not without being vilified in the extreme.
3. Equality laws and “Hate Speech” laws undermine free speech. There was a glorious moment caught on TV a few years back where a passing van driver got out of his vehicle to remonstrate with a few thousand Muslims carrying VERY incendiary placards & he was told to get back in the van & drive off or risk arrest. “What, just for doing what THEY are doing”. “Yes” said the officer.

We are a cowed people.

My heart goes out to you, but at some point the citizens have to retake their country. The US is on the same general path.

Don’t worry, me & that van driver are going to fix it! Mainly with our vote. All three main political parties are so so out of touch with the electorate that they are providing openings for new parties. I sense that it might take a few electoral cycles but they WILL bow to our wants.

The BBC is also heading for a major major train wreck. A monopoly always does. For example they sent 200 staff to South Africa to cover a recent funeral. Ordinary Brits were not quite as interested & there is uproar.

As you indicate, the USA has its own problems to face.

PS The London Docks are over the river, just north of Woolwich, and were the centre of the world tea trades for a few centuries. I haven’t checked but that’s probably where the stuff for Boston was shipped from. Now populated by recent immigrants! Always have been, throughout their history.

To John of Enfield. The judge is looking over his shoulder at the inevitable EU appeal.

As to the Tea trade – the humongous desire for tea by British led to the subjugation of China Ceylon & India. . Not a few mega abuses there even for Victorian times. Bit of karma going on perhaps.

Yep. The proverbial pain in the butt. I saw a statistic that said we fought or colonised 90% of the countries now in the UN! The Scots did most of the fighting though. Over & out.

Specifically to the area of the attack as John has pointed out – this is now an immigrant + 1 or 2 generations vicinity . A passing bus put the white unarmed woman on the spot . Also another coloured woman went to help in his final moments. But mostly the bystanders were mute & stupid.

Other parts of a London are also mixed but the people not so appalling . I would take a holiday in Whitechapel over this place. Yikes.

What defense did the second murderer need to offer? None. We all know that Muslims regard it as their right to kill us because we don’t believe as they do, and they all believe that we have no right to defend ourselves or to object to being slaughtered by them.

These things being so, Adebowale’s defense is obvious: he was exercising his right as a Muslim to slaughter a non-Muslim.

Britons need to get rid of their Islamic population, no matter how many generations they have been there.once their numbers are increased, they begin to riot and kill. This is the stage at which they are at in the UK. If you Britons want to live, you’re going to have to fight your police, your government, AND the Muslims. Fight on!

They should have shot them on the street, and be done with it.