Killer of British soldier Lee Rigby: “I am a soldier and this is war”

Killer of British soldier Lee Rigby: “I am a soldier and this is war”

Killer’s child was 4-days old on day of attack – “Al Qaeda …I love them, they’re my brothers” 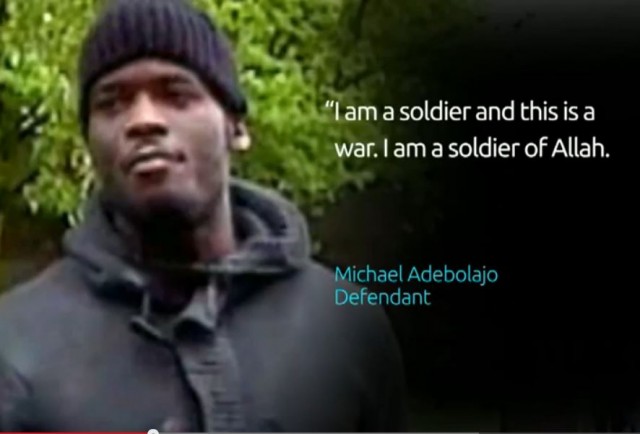 The trial of the murderers of British army drummer Lee Rigby with machetes and knives on a London street continues. We reported before, Murderers of Lee Rigby searched for British soldier to kill.

The trial is receiving almost no mainstream media coverage in the U.S.

One of the killers took the stand today, and was proud of what he had done, as reported by The Telegraph:

Michael Adebolajo, 28, also told the Old Bailey jury that he was a “soldier of Allah” and that he had no regrets over the killing because he was obeying his god.

He said after the case he should be either “ransomed” back to his Mujahideen brothers, freed or killed.

At the start of his defence in chief, Adebolajo sat in the witness box of Court number 2, surrounded by five security guards and just feet from Fusilier Rigby’s family.

He and Michael Adebowale, 22, are accused of murdering Fusilier Rigby by running him down with a car and then hacking him to death with a meat cleaver and knives near Woolwich Barracks in south east London on May 22.

Asked who al Qaeda were by his counsel, David Gottlieb, Adebolajo replied: “Al Qaeda, I consider to be Mujahideen. I love them, they’re my brothers. I have never met them. I consider them my brothers in Islam.”

He added: “Mujahideen are the army of Allah.”

When asked what his defence to the charge of murder is, Adebolajo said: “I’m a soldier. I’m a soldier of Allah and I understand that some people might not recognise this because we do not wear fatigues and we do not go to the Brecon Beacons and train and this sort of thing. But we are still soldiers in the sight of Allah as a mujahid.

“This is all that matters, if Allah considers me a soldier, then I am a soldier.” 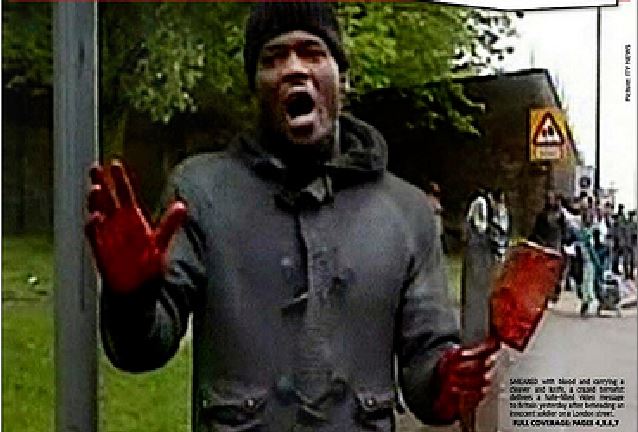 He went on: ‘My religion is everything.

‘When I came to Islam I realised that… real success is not just what you can acquire, but really is if you make it to paradise, because then you can relax.’

Adebolajo said he converted to Islam in his first year at Greenwich University.

As ground rules were set out for his giving evidence, including not speaking over the judge, he said: ‘I don’t believe in the law.’

They tell us they want to destroy us. We see that they have infiltrated all of our institutions and are forcing us to accept them and to eschew our own long-standing culture. But we are supposed to embrace them. That certainly is the PC thing to do.

This is the next article I read. It will never happen here, right?
http://www.zerohedge.com/news/2013-12-09/riots-break-out-singapore-think-your-country-immune

We’ve been lulled and conned into accepting every dangerous culture, political view, dangerous activity and social depravity imaginable, all in the name of tolerance and diversity.

Does any body really think the muzzification of America is going to be any different? Are we going to fight back? No, we never do. We just keep our eye on our retirement funds, watch grown men chase a bag of air around for millions of dollars a year for our entertainment, and stand around clueless and useless with our arms folded tsk-tsking this state of affairs.

“This is all that matters, if Allah considers me a soldier, then I am a soldier.”

The court ought to reply ‘we consider you a tater tot’ and then fry him.

I disagree. He WANTS to be killed. He’d be a martyr.

I think the court ought to reply, “We consider you a tater tot,” and then throw him in the back of the freezer, to be forgotten for a couple-six decades.

Execute him. Who gives a shi+ if he’s a martyr or not. That’s his and the muzzie thang, not mine. I just want him dead.

Tom Jefferson was dealing with this trash 200 years ago. But he had the advantage of living in a rational age.

Let’s hope our fellow Americans wake up to the risk before our own necks are slashed.

I’m sorry, but I don’t think you will see American attitudes coming to grips with Islam. I believe eventually they will take control of the political process and the courts, with sharia following close behind.

We have had over a decade of CAIR shoving this garbage into our faces, and the only answer Americans have is to become increasingly more “tolerant”.

Let’s face it – the American citizen has devolved into a liberal sheep, fearful of being anti-PC. Those who will stand and speak out will be weeded out, while the others sign up for the entitlement programs.

These cowards should be sliced thin and incorporated into a bacon, lettuce and jihadi sandwich, after which they should erect an outhouse over their open grave.

No insult to the pig that gave the bacon intended.

I was just reading about a pro-Christian rally in Germany that was disrupted by Muslims.

What would Sun Tzu do? Hint: it wouldn’t be warm and fuzzy.

“The trial is receiving almost no mainstream media coverage in the U.S.”

In other news, Time Magazine announced Miley Cyrus made their final top-10 for consideration as Person of the Year.

As did the Pope, which means that twerkiness is literally next to Godliness.

What still amazes me is that the Brits let this guy alone after he slaughtered Rigby. John Bull, where art thou?

The American LSM likely asked themselves this question: how will reporting on the trial of Lee Rigby’s murderer affect Obama?

Their answer likely led to their refusal to publish accounts of the trial.

The trial is receiving almost no mainstream media coverage in the U.S.

So he is a self identified soldier, but wears no uniform, and has infiltrated his enemy’s country in order to do mischief. This used to be called a “spy”, and was subject to execution even according to the Geneva Conventions. He has confessed. Hang him, with no blood spilled.

Send him to Iraq or Afghanistan and then let him work it out. He has no conception of what is going on over there. Let him live as a ‘Muslim’ in a Muslim country, then let him tell us what it is all about.

Unfortunately they’d probably welcome him as a hero.

His religion means everything to him, but he does not have any religion. When they sentence him, they should put him into a cell that has only Christian music and preaching.

Oh so this is a war and you are a Soldier, fantastic why don’t you send him our way. The U.S. military has ways of dealing with war criminals that probably aren’t as nice as the British legal system.

I’m impressed with the speed of justice in the UK. Less than 6 months from crime to conviction.

Had this occurred in the US, we would be talking years before these dirt bags were convicted.