BTW – have you “liked” Legal Insurrection on Facebook yet? 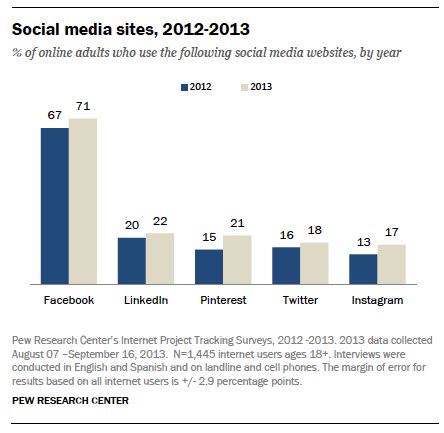 A new survey from Pew Research Center’s Internet Project shows that people are expanding their use of social media to more than just one platform, but Facebook still leads the way.

While some of the other key social media platforms seem to have developed more specific audiences – Pinterest, for example, is far more popular among women – Facebook appears to have a relatively broad audience in comparison.

Facebook’s engagement level is also higher than other platforms: “63% of Facebook users visit the site at least once a day, with 40% doing so multiple times throughout the day.”  46% of Twitter’s users check in daily, with 29% visiting Twitter multiple times a day.  (You’ll see that Twitter also has a much smaller user base than Facebook). 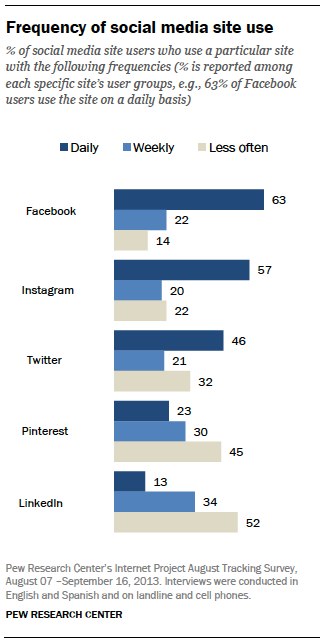 Another notable detail is that Facebook is seeing growth in the older demographic.  The Pew Internet survey notes that “Some 45% of internet users age 65 or older now use Facebook, up from 35% who did so in late 2012.”  By contrast, the 18-29 year old demographic has decreased slightly to 84%, down 2% from 2012.

The survey includes only the five key social media sites featured above.

Pew Internet has also done previous studies that looked specifically at the consumption of news on social media platforms, including on Facebook and Twitter.  Facebook led the way as a social media platform for news consumers.  While most don’t necessarily go to Facebook seeking out news, they typically get the news while they’re there for other reasons.

As we’ve previously noted here at Legal Insurrection, information like this can be helpful if you’re engaged in grassroots activism.  It helps to understand which social media platforms people are using, along with who is using them and for what purposes.

From my point of view, facebook is the only one of those social media platforms to make any sense on a daily basis. I share family and other pictures, stay in contact with old friends much more easily then old fashioned letter writing or even phone calls, and spread family news around to everyone without the telephone fanout of old.

Facebook seems to be a much more generalized platform, and is easy to use.

I find myself using G+ more often than FB nowadays.

Is Myspace dead? Are there other direct competitors to FB that may be growing?

What about Pinterest? Do you any of you do this? Is it comparable to FB at all?

I don’t “like” Facebook period. All your data “belongs” to then in the sense that you assign all copyrights to them, and they can do as they please with your data.

Not that I have an inflated perception of the value of what I write or photograph, but they ARE my poorly chosen words and blurry images. I’d kinda like to keep them that way.