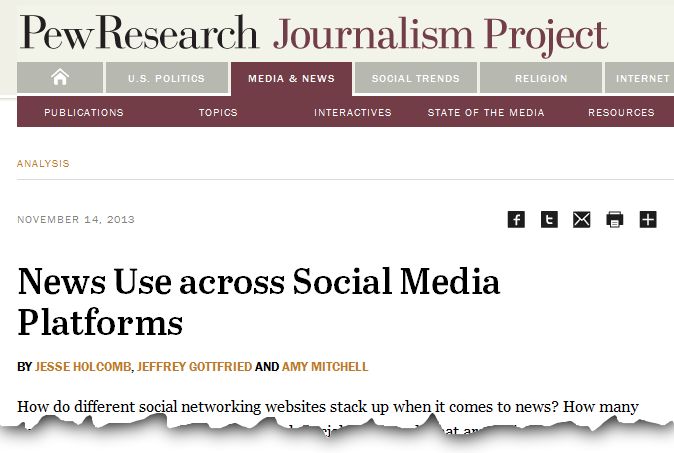 Pew Research is out with another installment on its study of News Use across Social Media Platforms, some of which may be helpful to activists in the political grassroots movement.

Facebook leads the way as a social media platform for news consumers.  64% of US adults are on Facebook, with 47% of those using the site to obtain news – this translates to 30% of the US population using Facebook as a source of news. Though in a previous Pew Research report (noted below), most indicated they do not necessarily go to Facebook seeking out news, rather, they get the news while they’re there for other reasons.

In contrast, only 16% of US adults use Twitter, with just over half of those using it for news, which translates to 8% of the population using Twitter as a source for news.  And while reddit’s users are very active news consumers, a very tiny fraction of the US population is even using reddit at all.

From the Pew Research report:

The proportions who get news, combined with the total reach of a site, show how many U.S. adults are learning about events and issues through each social networking site. Facebook is by far the largest social networking site among U.S. adults, and with half of its users getting news there, is also the largest among U.S. adults when it comes to getting news. As discussed in an earlier report, roughly two-thirds (64%) of U.S. adults use the site, and half of those users get news there—amounting to 30% of the general population. YouTube has the next greatest reach in terms of general usage, at 51% of U.S. adults. Thus, even though only a fifth of its users get news there, that amounts to 10% of the adult population, which puts it on par with Twitter. Twitter reaches just 16% of U.S. adults, but half (8% of U.S. adults) use it for news. reddit is a news destination for nearly two-thirds of its users (62%). But since just 3% of the U.S. population uses reddit, that translates to 2% of the population that gets news there. 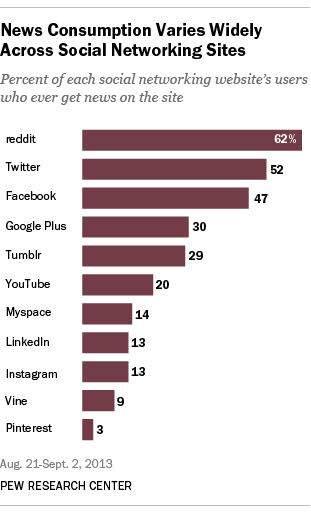 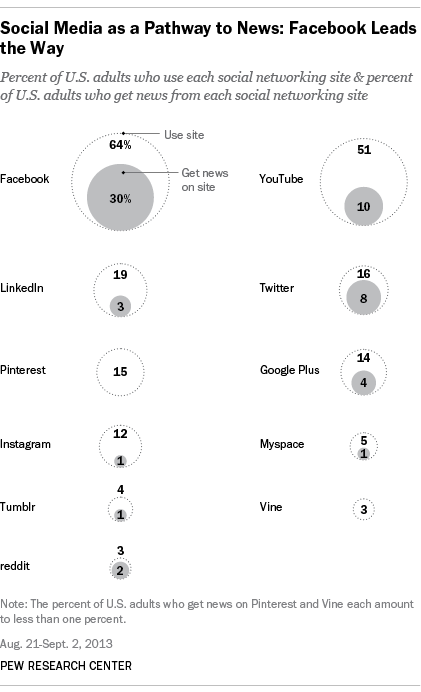 This information follows up a previous report from Pew Research that was a subject of my prior post that Not that many U.S. adults are on Twitter.

Twitter especially is often a focus as a tool in grassroots activism.  But as I mentioned in that prior post, it’s easy to get caught up in the bubble that is Twitter and think that what we see there represents reality outside of it.  That’s not necessarily so, when such a small segment of the overall population are getting their news from Twitter, or even using it at all.  So I think the information presented in the Pew Research findings can be helpful when determining strategy in the grassroots movement.

Twitter has however been very helpful in generating buzz that can be transferred offline.  Protest movements are a good example, as Twitter has served as a jumping off point for many to engage others in causes on the ground.  The same could theoretically apply to other political activism.

Another related point I’d make is that many journalists scour social media platforms for content and themes.  So something can go viral on Twitter, Facebook, reddit or elsewhere on social media and make its way to another offline outlet or to another website, which in turn has the potential to reach more of the US population.  This is also important when you’re trying to get a message to break through into mainstream culture. (Hence why I still think LOLcats matter).

All of that said, for activists, I think it’s a matter of determining how social media can best be used when it comes to grassroots activism efforts.  Each platform has its benefits (and drawbacks), but perhaps for different purposes and different types of content.

The report contains other helpful information on the demographics of social media news consumers, and how many still access news on traditional platforms.

Of these, Reddit is meant to be a news site, not just an incidental means of transmitting news.

It has a feature where people vote it up or down, and someone purporting to have expertise can answer questions. It has broad influence among college-age people.

The good thing about FB is it reaches into the friends sphere, without being too intrusive. Between the puppies, kids, and pictures of the last meal at Emeril’s, my friends in return get some meaningful chart or piercing political prose.

Since FB is a force multiplier, it is important for the message that is exported from here to that eye catching FB page, should be considered in formatting this page. Linking this page shows the graphic with the circles, but it cuts off the top circles.

Often it gives a choice of icons to use, for LI it is usually the LI or the caricature of Ron Coleman.

I don’t know how to do that part of formatting, but making a nice FB link seems like a good idea, for a more welcoming portal to this site. 🙂