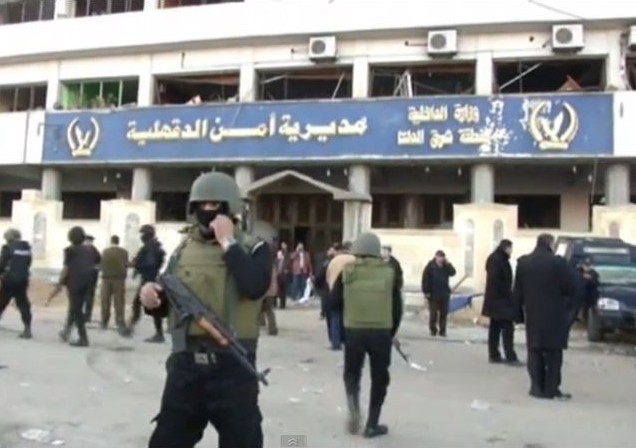 Egypt can be a place of miracles.

As we have just celebrated Christmas, I am reminded of the flight into Egypt of the Holy Family. More recently, snow hit the streets of Cairo in more than a century.

Now, Egypt begins its recovery after a brief visit with political insanity.

Egypt’s security authorities launched a sweep of arrests of Muslim Brotherhood members on Thursday and warned that holding a leadership post in the group could now be grounds for the death penalty after it was officially declared a terrorist organization, stepping up the government’s confrontation with its top political nemesis.

The announcement came as a bomb exploded in a busy intersection in Cairo Thursday morning, hitting a bus and wounding five people. Though small, the blast raised fears that a campaign of violence by Islamic militants that for months has targeted police and the military could turn to civilians in retaliation for the stepped up crackdown.

The terrorist labeling of the Brotherhood — an unprecedented step even during past decades when the group was banned — takes to a new level the government’s moves to crush the group, which rode on elections to dominate Egypt’s politics the past three years until the military removed Islamist President Mohammed Morsi in July after massive protests against him.

The move was made shortly after officials blamed the Muslim Brotherhood for a suicide bombing at a police headquarters north of Cairo that killed 16 people, as well as a series of other events highlighting increasing political tensions ahead of a key Jan. 14-15 referendum on a revised constitution.

In an article last week in the Daily News Egypt, the Republican member of the U.S. House of Representatives and former presidential candidate described the history of the Muslim Brotherhood as full of violence and terrorism.

“From the time of Hassan al-Banna and the ‘secret apparatus’ staging terror attacks across Egypt and the assassinations of Prime Minister Mahmoud an-Nukrashi Pasha and judge Ahmed El-Khazindar in 1948, to the ongoing attacks on Coptic Christians and churches and the terror campaign targeting the military in the Sinai and elsewhere, the Muslim Brotherhood has always kept terrorism as part of its arsenal and living up to their motto, ‘Jihad is our way,'” Bachmann wrote.

However, the US State Department is not waiting. Tour operators are gradually returning to Egypt after the it downgraded travel warnings for the country.

It’s another miracle in Egypt.

It’s amazing the amount of irrational governance a presnit can get away with if the press is complicit. Mind-boggling. I say the lawyers can wait. First, let’s kill all the journalists.

None too soon on the Brotherhood. Our friends in Egypt, both Christian and Muslim, were strongly supportive of the removal of Morsi and very, very annoyed at foreign press coverage which they viewed as pro-Brotherhood.

It’s a start. Now if only the MB embeds in the State Dept., NSA, and WH staff would also be declared terrorists some progress could be made.

They’re just figuring this out now?