Snow hits Cairo for the first time in 112 years. 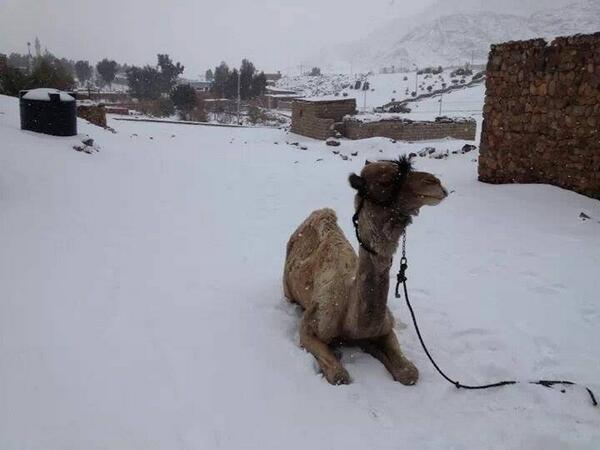 A little something for the “Global Warming” files!

Snow is blanketing Cairo for the first time in 112 years, according to reports. And while there were scenes of car accidents and people not looking too happy about the weather, a lot of people decided to have some fun and take a snow day.

The storm was part of a larger system that slammed the Middle East:

…The Jerusalem Post reports dozens of cars trapped on roads leading into the city and within its confines and that the Israeli Defense Forces have been called in to assist. It adds Jerusalem mayor Nir Barkat said the city was facing “a battle against a rare storm, the likes of which we have never seen.”

“There are no words to describe the situation here,” said Jonathan Hoffman, a Jerusalem resident, posting on a weather hobbyist forum early this morning local time. “The heavy snow never stopped falling and is still coming down. The city: shut down, immobilized.”

Meteorologist Justin Consor, who lives in Israel, said the snow that fell Thursday in Jerusalem was the most in over 100 years in December.

News like this tends to confirm more recent, solar-based analysis that the Sun’s activity may impact our weather more than our cars do…and underscores a BBC report detailing concerns that we may be entering another “Little Ice Age.” 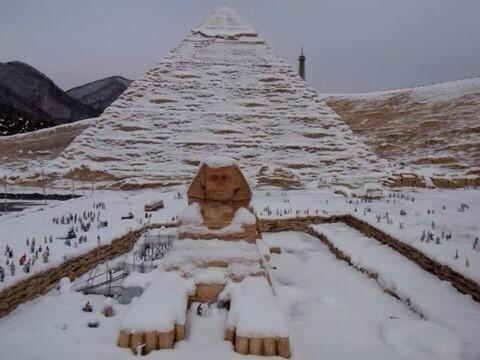 Read somewhere that it’s also 5 years to the day since Al Gore declared Arctic Ice would be nonexistent “in 5 years.”

One of the biggies in the Church of Global Warming had flatly stated that the Arctic would be ice free in 2013.

Yep, and very recently I heard a soundbite of the now massively wealthy Grifter Gore saying that each day our atmosphere has the equal of many(Hundreds, I think) Hiroshimas and Nagasakis ‘cuz of man made emissions. ((-:

But, hey, y’all, it’s that Sacred Lefty-Libby thing called CONSENSUS. Right? And The Bama is yet determined to push carbon taxes…Ya know unilaterally. Shainghai: Are you impressed??

It’s all part of the chaos, but had they admitted their inherently limited ability to forecast, let alone predict, the future, would have ended their redistributive scheme almost immediately. They should stick with the weather.

If someone hurries they could make a killing selling snow blowers.

On anther site, the 112 years for Cairo was tracked to a single tweet from a local, not known to be a meterologist or historian. So it’s just being repeated because someone said it.

It may be accurate, but the original reference that is being spread about the world came from an ordinary layman’s tweet.

It would be nice if someone actually checked the records.