“A great evil has been loosed upon the world … The abomination of anti-Semitism has been given the appearance of international sanction.” 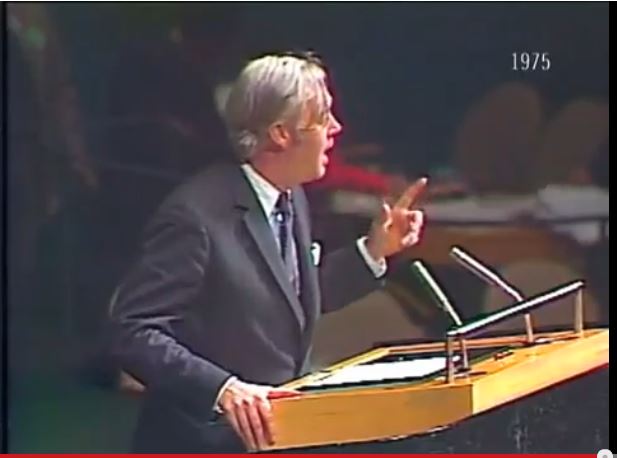 The U.N. General Assembly in 1975 passed the odious Zionism is Racism resolution, which has since been rescinded.

Voting closes today at the American Studies Association on an equally odious resolution singling out Israel, and Israel alone, for academic boycott. It is, as former Harvard President Lawrence Summers notes, “anti-Semitic” in its effect “if not in intent.”

The resolution has been harshly criticized by the American Association of University Professors and eight Past Presidents of the ASA as an abominable attack on academic freedom, among many other denunciations:

In no other context does the ASA discriminate on the basis of national origin—and for good reason. This is discrimination pure and simple. Worse, it is also discrimination that inevitably diminishes the pursuit of knowledge, by discarding knowledge simply because it is produced by a certain group of people.

Nonetheless, the anti-Israel venom is so strong among the leadership and membership of the ASA, that there is a strong possibility the resolution will pass.

Reading the comments and arguments of those favoring the anti-Israel academic boycott, there is little doubt that they view Zionism as Racism and would equally support the now discredited 1975 U.N. Resolution if put to a vote at the ASA.

For those who are gloomy about the machinations at the ASA, know that if the resolution passes, it will bring more infamy on the ASA than on Israel, much as the Zionism is Racism resolution brought infamy on the U.N. and eventually, rebuke and rescission.

Daniel Patrick Moynihan spoke out eloquently against the Zionism is Racism resolution, and his speech could just as easily be given tomorrow if the ASA adopts an academic boycott of Israel:

There is no idiot to compare to an academic idiot.

The AAAS … the ASA … abominable alright.

Idle hands are the devil’s workshop, the old saw goes.

If these worthless fascist bastards had to work for a living, they would have less time to hunt Joos down.

Get the federal government out of higher education funding. If institutions want to sponsor these miscreants, let them do it out of their fat endowments and not with taxpayer money.

Selective outrage. This is what happens when people defer to emotional appeals, rather than address issues on their merits. A consistent religion (i.e. moral philosophy) and its subset, “rule of law”, was supposed to mitigate human irrationality and temper human ambitions. Still, it is curious that human rights campaigns are disproportionately waged against Israel.

So, when these assholes get sued the first thing they will do is rush out and hire a law firm staffed with smart Jewish lawyers. When they find out how much this is going to cost them, they will have a collective heart attack, for which they will seek the services of smart Jewish cardiologists.

So? Anti-Semitism isn’t new. It started with Esau and his descendants. And Jews have outlived them all. And prospered. And will continue to survive.

Our very survival counters the lie that God has forsaken His people in favor of others. Not for nothing the bible states, 2000 years before Christianity appeared, “Hear O’ Israel, God is King, God is One.” Why make such a statement well in advance of Christianity?

Those who war against Jews are really warring against God, because God’s Word was introduced to the world through the Jewish people. And good luck with winning a war against God. The first such attempt in ancient Babel didn’t turn out any too well, did it now. And warring against Jews hasn’t turned out, nor will it turn out, any better. We are still around, no matter the losses suffered and those of our own who’ve abandoned their heritage.

Countries without Jews or those who persecute Jews aren’t doing so very well, nor have they ever done well. Those with or those who’ve protected their Jews have done much better.

Americans need to remember and take that lesson to heart. Leftist Democrats are anti-God and anti-Jewish, and see where they’ve led America under Obama, himself rabidly ant-Israel. Evangelicals well understand this, The Catholic Church, in dire straits globally, not so much.

… if the ASA approves the BDS resolution and formally joins the BDS campaign as an organization, we will seek to challenge ASA’s 501(c)(3) tax-exempt status.

I hope you mean to deliver on that, Prof. Jacobson.
I mean, it needs to be done.

“Historians will do that for us, and it is sufficient for the moment only to note one foreboding fact. A great evil has been loosed upon the world. The abomination of anti-Semitism…”

I, as a 2013 historian, concur. A Great Evil has been loosed upon the world.

The ASA has chosen Evil over Good, exclusion and over embrace, collective infamy instead of morally upright stand-alone courage, lies instead of truth.

There are real and eternal consequences to folly and the banality of evil.

That this insidious cult and the like-minded departments it fronts for calls itself the AMERICAN STUDIES association is textbook Orwellian doublespeak.

How much you wanna bet that a majority of the people voting for this resolution are self-hating Jews?
I, for one, have never understood the hatred that so many people have for Israel and the Jewish people. Jews have done more to advance mankind than any other religious group in the world.
Enough of this Jew hatred! Sue the hell out of them, Professor!

For all those Palestinians who want to live in peace and allow others to do the same, I would like to see something good done, and there are many things that are good and could be done. I would welcome that conversation.

but this is another conversation and it is a typical one heard today in academia (to which I belong myself and so find such conversation doubly distressing) and in liberal American circles.

I think it is carried on by people who think they are good, in essence mean good, but do incalculable evils. What they don’t understand is how evil actually works, especially when it is the evil, as so much is of the Palestinians today, instigated by anti-Semitism.

I have the misfortune to know that evil. As someone who spent her childhood in a Nazi Ghetto, who lost more than half her family to the Nazi killing machines, what I know and have seen confirmed by reality and history, is that those who do not of good will must be stopped and stopped immediately and in no uncertain terms. If only Hitler and the Nazis had been stopped before it got to be too late to stop him, the atrocities of WW II would never have happened.

So, no, I do not want to join you. I want and do intend to oppose you and to stop you before it’s too late, but in the hope, always, that you will come to realize what catastrophic events your mindless words and your mindless actions are instigating.

Curious as to when the ASA will be issuing brown shirts to all of its members. Anyone know?