Lawrence Summers: Academic boycott of Israel is “anti-Semitism in effect”

Lawrence Summers: Academic boycott of Israel is “anti-Semitism in effect”

Calls on universities to shun American Studies Association if enters into academic boycott of Israel. 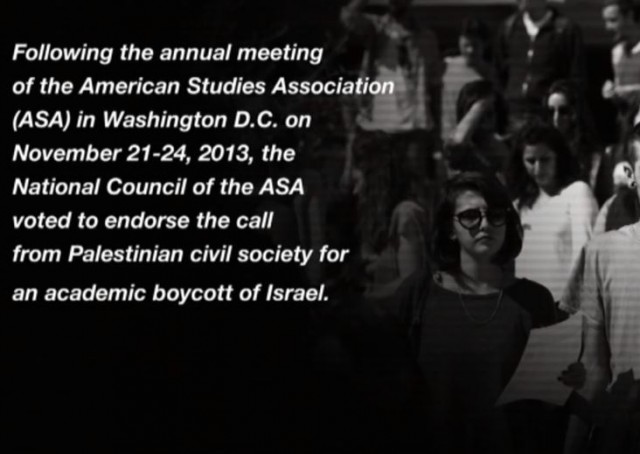 Lawrence Summers, former President of Harvard University, has commented on the proposed resolution by the American Studies Association to boycott Israeli academic organizations.  The membership voting on the anti-Israel boycott resolution concludes on December 15.

For background on the proposed academic boycott and those anti-Israeli “academics” who worked for years on the resolution and then ambushed pro-Israel and/or pro-Academic Freedom members, see my prior posts:

Here is the Summers interview with Charlie Rose specifically on the ASA boycott resolution (full interview here, segment starts at 35:00)):

Charlie, I said some time ago with respect to a similar set of efforts, that I regarded them as being anti-Semitic in their effect if not necessarily in their intent. And I think that’s the right thing to say about singling out Israel.

If there was an academic boycott against a whole set of countries that stunted their populations in some way, I would oppose that because I think academic boycotts are abhorrent, but the choice of only Israel at a moment when Israel faces this kind of existential threat I think takes how wrong this is to a different level.

My hope would be that responsible university leaders will become very reluctant to see their universities’ funds used to finance faculty membership and faculty travel to an association that is showing itself not to be a scholarly association bur really more of a political tool.

I think Summers in onto something here.  While we’re still doing the research, I question whether engaging in an academic boycott as an organization calls into question ASA’s tax-exempt charitable status.  (If we conclude that it does, we will challenge ASA’s 501(c)(3) status.)

As Summers points out, the organizational academic boycott takes ASA away from being a scholarly organization, one which represented to the IRS that it is engaged in charitable and educational activities, into a political organization.

Several decades ago the U.S. adopted the public policy of penalizing companies that honored the Arab League economic boycott of Israel.  The new boycott is not state-sponsored, perhaps by design to evade U.S. anti-boycott laws.

Perhaps it’s time for Congress, when support for Israel among the American people is at historic highs, to make clear that groups like ASA can spout all the hatred of Israel they want, but if they enter into the new form of international boycott, they should not be subsidized by American taxpayers in the form of tax-exempt status.

We will keep you informed.  Whether the ASA resolution passes or not, we intend to address this situation.

While anti-Israel boycott supporters think they will have pulled a great victory with the ASA resolution, I predict instead that it merely will serve as a wake up call to American civil society to stand against the academic boycott of Israel.

As many critics point out, to single out Israeli universities for violating human rights is transparently myopic. Chinese universities are also “a party” to the policies of their government, which has forcibly relocated many Tibetans from their homes and demonizes their religion—and fires professors who criticize the rule of the Communist Party. Russian universities promote and enforce the Putin government’s vile laws against gays and lesbians. But scholars of American history and culture routinely speak at academic institutions in both countries and invite their counterparts to visit theirs. By the same logic, one might call on ASA members who despise the national security state yet work for universities that get grants from or allow recruiting by the Defense Department, the CIA, or the NSA to boycott themselves.

Even if most of the 5,000 members of the American Studies Association endorse the boycott resolution, they are quite unlikely to change anyone’s mind or, for that matter, Israeli policy. Instead, the resolution has embroiled the ASA in an entirely predictable cyberstorm, as charges of “Jew-hating” and “Zionist apartheid” befoul the Internet. Supporters salute the “courage” of their comrades, while many academics who reject the boycott—including eight past presidents of the organization—may never take the ASA seriously again.

Update No. 2:  Ari Kelman,  Professor of Education and Jewish Studies at the Stanford Graduate School of Education, writing in The Nation, Engage, Don’t Boycott: An Open Letter to the American Studies Association:

1. I got into the academic business because I treasure the fundamental value of intellectual freedom. It allows those of us fortunate enough to call scholarship our profession to do the work we do. A boycott of Israeli intellectual and cultural institutions seems to run counter to this basic premise of academic life and the commitment to increasing, not limiting scholarly conversation and engagement….

4. Targeting Israeli universities misses the political mark entirely and could even punish those we wish to support. Israeli universities are actually some of the very few places in Israeli society where Jewish and Palestinian citizens of Israel interact as equals. Singling out universities for boycott targets precisely the places where interaction can and does take place, and forecloses opportunities for potential political transformation that can result.

5. Israeli higher education is publicly funded. This allows Jewish and Palestinian (and Druze and bedouin) citizens of Israel to go to university with relatively little expense. The boycott, then, might punish not only the scholars to whose work I referred to above, but the Palestinian students whose areas of residence ended up inside the borders of the State of Israel.

6. I recognize that the language of the American Studies Association resolution (as with most language from the broader BDS movement), focuses on institutions, not on individuals. This is, I think, a distinction without a difference….

Good for Larry Summers. His politics, and some of his financial opinions may be off, but at least he speaks the truth about bigotry and the upside down political correctness of academia.

But – so many calling for the boycott are Jewish leftists.

That’s right. They think that makes them some of the “good ones.” They don’t understand that Jew-hatred is about who you are, not what you do. In the world they’re trying to bring about, they’ll be marched to the gas chambers right beside me.

The Flotilla set ground on the shore of this uncharted desert isle,

The professor and another professor,

No tenure, no boycotts, no United States,

Not a single luxury,

As primitive as can be.

So join us here each week my friend,

As scales fall from all eyes,

Descend to Lord of the Flies.

LukeHandCool (who, in terms of just survival, would rather be stranded alone with Russell Johnson, who was not a “real” professor, but who simply played one on Gilligan’s Island, than the entire membership of the ASA. Mere actor Russell Johnson flew 44 combat missions during WWII, and was awarded the Purple Heart for injuries sustained when his B-25 bomber was shot down (killing his radioman). I’ll take that kind of professor any day of the week over these pathetic poseurs. And, in terms outside of survival, I’d again choose Professor Russell Johnson over the horde of ASA professors. I’m sure he’d be quite the raconteur … at least in comparison to the tedious, insufferably pompous ASA professors. Even on a desert isle, man does not live by fermented coconut juice alone)

Speaking of the ocean and survival, my brother-in-law, Sherman, talks about how surfing helped save him from being haunted by his experiences in Vietnam.

A swift boat veteran, he experienced a lot of the hell of war. As he told his wife, my older sister, “You could never comprehend what I experienced over there.”

He’s a local surfing legend in these parts. He’s always teaching others to surf, including the filmmakers who made this little short video.

He taught one woman how to surf who turned out to be a music producer and she got him a role in a music video for The Cure a few years ago.

Apologies for the neg. 1 vote. Wherein I wanted to reply with a comment on your absolutely creative and positive comment, (your brother does not hold the market on creativity), my hand/mouse coordination took a dip.

I don’t worry about opposable thumbs.

Larry Summers is too liberal in his outlook for me. But I respect him. He put his career on the line and lost when he told the truth about women in “hard” curricula at Harvard. And he left the Obama Administration rather than watch the political aides run wild with Obama-Care and mess the whole economy up.

The latter probably cost him the job of Fed Chairman, which is too bad because he was certainly the best we were ever going to get under Obama. Janet Yellin never met a printing press she didn’t love and want to keep running full out.

One might ask all these supporters of “courage” just where the countries that surround Israel stand on THEIR human rights issues. They won’t be anywhere as good as Israel’s.

From one of their supporters.

Emmaia Gelman replied to your comment on American Studies Association’s link.
Emmaia wrote: “Gene, please don’t use queers as cover for apartheid. Palestinian and Israeli queers alike have called for US supporters to join the boycott, because it’s not possible to talk about civil rights for queers when nobody has human rights. Such rights as there are for queers in Israel are selectively applied by race/ethnicity/religion — and they were won by activists’ demands, not by some enlightened Israeli government that embraces us. Please do some basic research, and don’t dare invoke liberation movements in support of war crimes. https://www.facebook.com/PQBDS“

Emmaia doesn’t seem to get it through her thick skull that for gays in a Islamist country, it’s not about “Civil Rights” but about life and death. Mostly death.
It also appears that many misguided gays have their own propaganda page.

Homosexuals, male and female, say it’s about human rights for all. It’s not. It’s about their hatred of God, and that is why they prefer being thrown off of buildings by Muslims to supporting Israel. It was the Jewish God who condemned and still condemns homosexuality. In the eschaton, the unrepentant homosexual is outside the gates of heaven.

Meanwhile, Islamic societies are hypocritically homosexual ones. Yes, they kill some homosexuals, but at bedrock, those societies are deeply misogynistic and totally homoerotic to such an extent that their idea of paradise is bisexual with a lot of man-boy pedophilia.

So, if you were a homosexual, whom would you support? No matter how liberal Jews get, what they cannot erase is the “stain” of being connected to a religion which has made he condemnation of homosexuality part of the world culture for more than 2,000 years. That’s why homosexuals abhor Israel, IMO.

After caving to affirmative action female profs at Harvard who forced him out, he decides to take a stand Israel. Guess even leftist Jews have a spark of Jewishness, pride and preservation hidden somewhere deep within. Could that spark be THE RESURRECTION, which keeps Jews from total assimilation?

[…] singling out Israel, and Israel alone, for academic boycott. It is, as former Harvard President Lawrence Summers notes, “anti-Semitic” in its effect “if not in […]