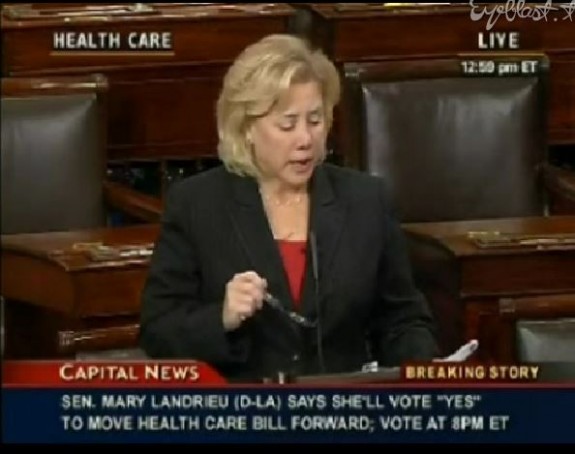 They own all of our Obamacare problems, completely.

Senate Democrats voted unanimously three years ago to support the Obamacare rule that is largely responsible for some of the health insurance cancellation letters that are going out.

In September 2010, Senate Republicans brought a resolution to the floor to block implementation of the grandfather rule, warning that it would result in canceled policies and violate President Barack Obama’s promise that people could keep their insurance if they liked it.

“The District of Columbia is an island surrounded by reality. Only in the District of Columbia could you get away with telling the people if you like what you have you can keep it, and then pass regulations six months later that do just the opposite and figure that people are going to ignore it. But common sense is eventually going to prevail in this town and common sense is going to have to prevail on this piece of legislation as well,” Iowa Sen. Chuck Grassley said at the time.

“The administration’s own regulations prove this is not the case. Under the grandfathering regulation, according to the White House’s own economic impact analysis, as many as 69 percent of businesses will lose their grandfathered status by 2013 and be forced to buy government-approved plans,” the Iowa Republican said.

On a party line vote, Democrats killed the resolution, which could come back to haunt vulnerable Democrats up for re-election this year.

These vulnerable Senate Dems who are up for reelection in 2014 helped kill the grandfathering fix: Mary Landrieu, Jeanne Shaheen, Mark Pryor, Kay Hagan and Mark Begich.

Oh, and remember the Louisiana Purchase.

I suggest that Democrat’s shallow hard.
This is just the first course.
“But we have to pass the [health care] bill so that you can find out what’s in it….”

Obamacare, because 20-something year old men have been denied mammograms for too long.

The party of Pres. ScamWOW is eating the consequences of the ObamaDoggle…???

I’d like to see Allen West, Sarah Palin, and Ben Carson on board as well.

By the time the Dear Leader-Loving, Fifth-Column, Formerly-Free Press get finished with this whole unmitigated mega-disaster… it will all be Bush’s fault.

Had the Democrats been in charge of physics, the following would be accepted as true: Gay = τ · ω

I’ve seen more than once that this is Mitt’s fault.
Because there was some program in Mass that had similarities to parts of OCare.

The text of the Resolution reads:

“Resolved by the Senate and House of Representatives of the United States of America in Congress assembled, That Congress disapproves the rule submitted by the Centers for Medicare and Medicaid Services, Department of Health and Human Services relating to status as a Grandfathered Health Plan under the Patient Protection and Affordable Care Act (published at 75 Fed. Reg. 34538 (June 17, 2010)), and such rule shall have no force or Effect.”

Here is a lengthy but informative analysis by American for Limited Government dated 8/16/2010 about the HHS rule that changes the Grandfather Clause (75 Fed. Reg. 34538): http://is.gd/WPntmw

And here is a link to the Senate roll call vote in which Dems killed the Resolution: http://is.gd/xgo8sS

Actually Professor isn’t there a legal recourse for the House on this issue? It seems to me that the law allowed the grandfathering of policies but the “regulations” later written negated the intent of the Law. Isn’t this the same type of legal cuteness liberals pulled with gun control as it make it impossible to exercise your second amendment rights? Didn’t the SCOTUS slap that type of legal regulatory shenanigans with gun ownership?

I believe IF the House were to bring this to court with an emergency hearing to block the canceling of health insurance policies it would be successful.

They then could get the SCOTUS to rule based on Obama’s declarative statements that:
1. NO ONE should lose their existing policy, as Obama clearly stated that was not the intent of the Law.
2. Health insurance companies are not obligated cancel the existing policies on renewal IF the replacement policy they offer isn’t $2500 less than the existing one or if they cease to offer any replacement policy.
3. NO ONE can be be fined/taxed IF their policy was cancelled due to regulatory over reach limiting grandfathering for those who can’t get their policies back.
4. No doctor or hospital can be dropped from being a medical care provider by an insurance company based on the new regulations as this defeats what Obama said.

Democrats did build this, on their claims of saving the common man. Exactly who are the alleged “uninsured” commoners, why are they uninsured, and how does forcing them into funding other people help them?

I contend those without policies are mostly either illegal aliens or younger people that are “pro-choice” (to not insure). Those groups have few assets to lose in case of a medical emergency. Their safety net is paid by the 85% that already have insurance, plus the government programs. These alleged “uninsured” are already covered, OUTSIDE of an official company policy.

They are “free riders” in a sense, but if they are poor they get free care anyway. If they have assets they are “self-insured”, and their “excess” wealth will be taken if they have a big health event. So what is Obamacare really fixing?

A big part of the phony argument is that life was intolerable for those without an expensive policy. The exposé of this manufactured crisis has to include the myth told about the “poor abused uninsured” (like Fluke?). Medicaid was available for truly needy, and those that barely could afford a policy are the ones now hardest hit by Obamascam.

Democrats fully own a scam that is CAUSING a crisis that did not exist before, and was only ever a massive fraud to move the ship of free state into the coral reefs of the communist collective. They figure if they can wreck health care and the economy, we’ll cry for a statist salvation.

Make them own it.

You are exactly right. Moreover, the false crisis has become part of the current general consensus. For example, it is almost uniformly stated that at least obamacare solved the horrible “pre-existing conditions” problem. It is a fairly long story, but even that part of the supposed crisis was made up.

I know several of the uninsured. One family lives down the street and owns a carpet store, they just don’t want to spend their money on insurance and have figured out how to scam the hospitals when ill. Another family has about $20 million and can’t see having any kind of insurance when they can write a check for their bills. Then there are the poor patients that I took care of and they are too lazy to go sign up for Medicaid and can’t see the point as they don’t intend on paying their bills in the first place. We had to have social service sign them up and with the laying in the bed doing nothing it was a major effort.

My recollection is that the Federal government has shelled out millions over the years so poor people could receive emergency room care. We have been paying for them for years. Now honest working people are the ones who are going to loss their health care.

Be totally surprised if Landrieu got the boot, think that family has been in Nawlins since before Andrew Jackson arrived.

I hear them thar Creole people, can eat the tail off a gator tryin’ to get away..

I live in Louisiana. The problem with Mary is that she has the backing of the oil industry, which is the major industry down here. The reason for the backing is that she votes for them. She is about as dumb as a rock, but so are most of the people in south Louisiana, who traditionally vote Democrat.

Damn it, the Democrats are gonna get all the credit for Obamacare.

Now who is the real culprit? The Dems, of course. People should now be waking up to that fact.

I’m sorry Barak, you were saying something about slurpies and running off into a ditch? Dude, its not the starter, its the engine

And now you’ve drained the battery.

Senate Dems killed (Obamacare) grandfather (fix)
…so this what what they KILL when not murdering unborn fetuses.