Obamacare numbers released – only 27k sign up through healthcare.gov

Obamacare numbers released – only 27k sign up through healthcare.gov

How many of these sign ups are just “in the cart”? 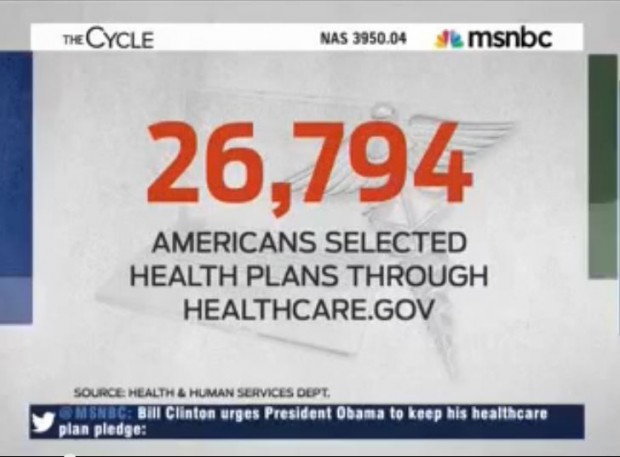 The “official” numbers have been released by HHS:

Some 106,185 people signed up for Obamacare in its first month of operation, a period marred by major technological problems with both the federal and state enrollment websites.

Fewer than 27,000 Americans selected an insurance plan through the federal healthcare.gov site, which is handling enrollment for 36 states, according to figures released Wednesday by the Obama administration. The site is still far from fully operational, leaving tech experts racing to get it working by month’s end, as the administration promised.

Nearly 79,400 people signed up for coverage through state-based exchanges, with California leading the way with nearly 35,400 selecting a plan. States have also been battling system errors, with Oregon having yet to accept online applications.

These figures reflect people who have selected insurance plans through the exchanges, but not necessarily paid for them. Americans have until Dec. 15 to pay if they want coverage to begin on Jan. 1. Open enrollment lasts through March 31.

In addition to the sign-ups, nearly 975,500 people have submitted applications and learned whether they are eligible for subsidies, but have not yet selected a plan.

Separately, another 396,261 Americans have been determined eligible for Medicaid or Children’s Health Insurance Program (CHIP).

The long-awaited initial figures are a far cry from the 7 million people the Congressional Budget Office projected would gain coverage through the exchanges in 2014. The administration has said it expects 800,000 people to pick a plan by the end of November.

These numbers may be inflated, considering how the administration has decided to count “enrollees” to include people who merely have gone through the process, but have not yet paid.

Medicaid sign ups are going well, though, something the administration is proud of:

Thanks to #Obamacare, more than 500,000 Americans have already signed up for health coverage. #GetCovered, pic.twitter.com/CZ6g95XLOK

To all GOP types…

Stand back and let it burn.

Stand back and let it burn.

Even the Clintons are now going that route.

Save your breath to cool your porridge, Rags. You’re talking to the Stupid Party, justly so named because of its abundance of elected officials who never miss an opportunity to prove they’re morons.

How many of the potential enrollees will actually go forward with payment of premiums when in February 2014, Judge Friedman of the U.S. District Court in D.C. rules that anyone of the enrollees from any of the 34 (36?) states that chose NOT to set up a state exchange, by Congressional Law, are not allowed to receive a subsidy to pay these “affordable” premiums and the policy lapses for non-payment by the insurance company. But only after 3 months of non-payment where the enrollee racks up some tidy medical bills assuming they have coverage. The Train Wreck just goes on and on.

If this had been “MontanaCare” and only got 27K “enrolees” in the first month, it would have been judged a failure by any rational person.

Is anyone signing up other than those with pre-existing conditions or who see the ACA as a cheap ticket to a sex-change operation.

Yes, let us see the numbers. How many of the 27k have actually made a payment on a policy, and how many are going to be “paying” for their policy with a big fat subsidy check from the U.S. Treasury?

And speaking of taxpayer rip-offs, Republican politicians should be informing Americans about the fact that Obamacare has a taxpayer bail-out for the health insurance industry built into it, in the event that the “young healthies” don’t fall for the scam and sign up in large enough numbers. American taxpayers will no doubt be thrilled to learn that Democrats have volunteered more of taxpayers’ money for yet another corporate bail-out necessitated by the failure of yet another of the Democrats’ idiotic wealth-transfer schemes.

The U.S. Treasury subsidy check is being litigated and has yet to be ruled on. It is the Congressional version of the A.C.A., not the Senates version which was gleaned of this “subsidy carrot”, which reads only the State sponsored health exchanges can pass on a subsidy to premiums. It has been I.R.S. who has written in the subsidy rulings for ALL exchanges as a “tax rebate against paid premiums. I.R.S. cannot make laws or amend laws. Only Congress can write or amend law.

Since this administration has zero credibility, any number that they provide is suspect and probably much lower than they would ever admit.

Lie, lie and lie again as necessary is their recipe of deception..

So many people voluntarily treading the road to serfdom. These are the ones who are getting coverage “free” or subsidized greatly at taxpayers’ expense.

There’s nothing “voluntary” about it. They’re canceling my current state risk pool plan Dec 31. I can’t afford to risk going without insurance, even if I have to pay twice as much for worse insurance than I had. Yes I bought a policy, but haven’t paid yet. I’d be happy to dump it if they renig on the cancelation of my current plan. Bur I SURE wouldn’t say I “volunteered” for this crap.

You have to admit though you are in a group with people who either want to get something for free/cheap or are basically absent any real alternative and have no choice but to sign up.

The ridiculous inflation with the Medicaid numbers are ridiculous. Wasn’t medicaid available before the ACA?

You’re talking to someone who has not had health insurance for years and prefers to pay out of pocket for doctor’s visits and meds, and I do have a chronic condition. I addition to this, I have a profound distrust of meds, so I always look for a herbal alternative.

The Feds will have to find me to sign me up, kicking and screaming, and that’s no joke.

With a failure of this magnitude in any kind of organization, be it political, business or academics (yeah, folks, even the liberal ones), there would be firings, demands of repayment, lawsuits, criminal charges, etc.

Not in the Obama administration, though.

If you liked your money, you can’t keep it.

And how many of those signing up were from the “uninsured” (both through no fault of their own as well as the scofflaws) that this law was supposed to get insured?

The thing about the Exchanges is that you can’t get a real price tag on a plan, or on a subsidy, until you go through the whole process, save only actually committing to paying for it.

Working nights, I went through this myself: just to see what a comparable plan to my current one will cost me when/if my employer dumps me (or, more likely, next year when Sebelius’ “grandfather” restrictions make my current employer provided plan illegal).

I had no intention whatsoever of actually buying.

I’d bet they counted me though as part of that ~27k.

I’d also bet the actual number of purchasers is about 20% of that, roughly 5k actual buyers (and almost all of them heavily subsidized).