Hey, you have to crack a few eggs to make an omelet. 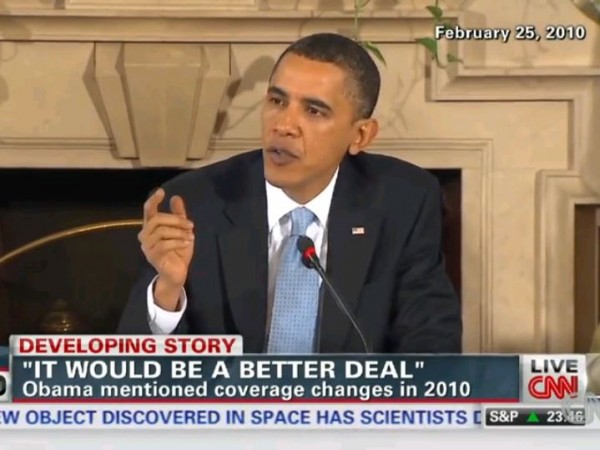 What do you call 8-9 million people losing health care coverage they like in a nation of 300 million?

Actually, probably more like 15 million at the low end, several tens of millions at the high end.

But I’m not going to quibble over a few million people here or there.

You know who else didn’t quibble over a few million people here or there?

Via MaggotAtBroadAndWall in the Tip Line

The first minute of his clip needs to be embedded on every blog, facebook page, etc. to ensure that everyone knows with unequivocal certainty that Obama deliberately and repeatedly lied to facilitate passing Obamacare under fraudulent conditions. Everybody in his administration was complicit in the fraud. As was much of academia.

Transcript via John Nolte who also has a longer video clip:

OBAMA: Since you asked me a question, let me respond. The 8 to 9 million people you refer to that might have to change their coverage — keep in mind out of the 300 million Americans that we are talking about — would be folks who the CBO, the Congressional Budget Office, estimates would find the deal in the exchange better — would be a better deal. So, yes, they would change coverage because they got more choice and competition.

No, that doesn’t quite do it justice. Imagine if Bernie Madoff had swindled 16 million people, many of whom never agreed, or had any desire, to do business with him in the first place.
—Taranto, WSJ

LOVING IT…!!! So much FAIL, in so little time, and all of it hitting middle-class people.

Wait until next year when ObamaCare hits the Group Plans. Then you will see 75,000,000 more lose their insurance.

If you are already stunned by rising Obamashock! healthcare costs, you can expect still more shocks thanks to new rules and expanded coverage for mental health and addiction programs.

A few snips from the New York Times article Rules to Require Equal Coverage for Mental Ills will explain.

The Obama administration on Friday will complete a generation-long effort to require insurers to cover care for mental health and addiction just like physical illnesses when it issues long-awaited regulations defining parity in benefits and treatment.

The rules, which will apply to almost all forms of insurance, will have far-reaching consequences for many Americans. In the White House, the regulations are also seen as critical to President Obama’s program for curbing gun violence by addressing an issue on which there is bipartisan agreement: Making treatment more available to those with mental illness could reduce killings, including mass murders. …

Adding “mental health” lays the groundwork for future “mental hygiene” panels, to complement the death panels. This is actually a Bush plan, but hearkens back to the eugenic / Nazi methods for eliminating undesirable folks (read Jews, Christians, and now, anti-Communist tea-party types).

I say groundwork because we are only in the early phases of national health. Now, the coverage is mandatory. Next, the treatment will be mandatory. All will be screened to enforce compliance with mandatory dietary rules (e.g., salt, trans fats, alcohol), prescribed medications (Lipitor, Ritalin), and lifestyle restrictions (e.g., travel, recreation, internet use, etc.).

Exactly! Thats why the employer mandate was illegally delayed. Eventually, depending if Obamacare doesn’t get repealed, every policy will need to conform to Obamacare regulations. It may take a few years, but in just the 1st year, they estimated that up to 45% of large business plans would get cancelled and 67% of small business plans. Could you imagine the outrage if tens of millions plans getting cancelled this year? Will Obama really allow the employer mandate to go into effect next year, as businesses start telling employees in July and August that their plans are changing, and not for the better, with off year elections coming up in November. I don’t think so.

I was in favor of an aggressive shut-down stance. The democrats now seeing all the problems cascading one after the other, will probably try to extend the mandate dates past the 2014 elections.

I hope the GOP doesn’t snatch defeat from the jaws and agree to that. They tried to get it delayed and the dems said “no.” I wish people weren’t dying from this, but it’s going to kill a lot more people in the middle run if it isn’t stopped altogether. When those with employer-provided insurance start getting walloped right before the mid-term elections, THAT will benefit the anti-Obamacare forces.

So, I hope and pray the GOP doesn’t give the dems any relief from their train wreck. They tried; the dems obstinately refused, so let them have their train wreck, and let the voters clean up the mess in November 2014.

Obamacare is the final nail in the American standard of living.

No, amnesty will do that for you.

Can someone sue this clown for fraud? He’d be going to prison for years if this was a corporation.

“So, yes, they would change coverage because they got more choice and competition.”

NO NO NO … they change because the old policy they liked was canceled after dirty deals were made. Yes, I get the point that he knew about the 9 million, but an additional lie is they would be able to CHOOSE. Liberty versus Obama’s coercion.

Obama can never admit HE PLANNED to force tens of millions into expensive government plans. Then after time and pain, to collapse the rest, forcing all into some magical nirvana. So they slow walk the pain and suffering, with no capable business people to affect the transformation to this brave new health care world.

The pro-choice, got NO choice. And the forced purchase was made more expensive for a worse product. CBO gave low estimates based on Obama lies. Garbage in, garbage out (but not out till 2017)

And … these numbers don’t include all that are working part time BECAUSE full time work now mandates expensive health plans. AND another 140 million work insured still don’t know what happens after their one year (unconstitutional) deferment. Special people get thrown under the bus last.

“We hold that the plaintiffs — the business owners and their companies — may challenge the mandate. We further hold that compelling them to cover those services substantially burdens their religious-exercise rights. Under RFRA the government must justify the burden under the standard of strict scrutiny. So far it has not done so, and we doubt that it can.”
—Seventh Circuit

No, that’s no good, either…

How about “Totally Flucked Up?”

Sort of like Burds of a Feather Fluck together!

well thats a fishy topic, best to not get hooked on it.

Which is why I’m totally in favor of putting 11-20 million Mexicans on buses, and taking them home. Today.

Recently the comments on stories about Obamacare at Politico and National Journal have been close to 100% negative. If the author is still trying to defend Obamacare the comments are usually scathing.

wasn’t the millions of people the same amount (or close) of the uninsured the crap was supposed to help?

He’s gonna’ fix it. BTW, still have that dandy 4 lane bridge on the market.

This episode kind of reminds me of that children’s song we were taught in grade school, only to learn later that the sweet Alouette we sang about was a lark and the song gloried plucking the feathers off each of the bird’s body parts, so that fowl could be eaten.

Obama sold his legacy act as something benign when it was instead a most foul piece of excrement rammed down on those he would call his subjects. And, the only thing possibly joyful about Obamacare is that we got to hear young minds of mush sing joyful paeans to their Messiah, Obama the Merciless.

Or learning that Ring Around a Rosy is about the plague.

Not a big deal to the sociopath in chief.

I remember some young Obamabots reciting that refrain back when the bill was being pushed through Congress — as though we didn’t have any choice or competition in the insurance market until the Dems decided to impose choice and competition on it. The young Obamabots surely had no idea that those words were just as cynically chosen as “you can keep your health plan if you like it.”

This should be source of outrage at Obama, but it won’t be to any greater degree than the media is already feigning outrage. However there should be REAL outrage at the Republicans, especially Eric Cantor, who sat there and heard this and made no issue of it. It doesn’t matter whether the number is 8-9 million or 150 million; Obama has been lying for years and the Republicans never called him on it. They could easily have published this video long ago, before the 2012 election.

How many prospective Obama voters would have thought “hey, that could be me,” instead of “that’s only a tiny part of the population.” And how many would have disbelieved his claim that people would be moving to a “better” plan than what they had? When some people highlighted the “electricity prices will necessarily skyrocket” comment, how much effect did it have?

Even the basis of his apology was a lie, he said he thought those that would lose their policy would get a cheaper but more comprehensive one. A LIE. Most of those who have their policies canceled are going to pay substantially more. Even liberal talking heads experienced it.

Every catastrophe/scandal is explained away with small lies and blame shifting, supported by false premises.

Not only was the apology not an apology (“sorry you are so stupid, that you didn’t understand the truth I spoke”), but setting the stage for his non-apology, he had to re-write history.

Obama seems to love stagecraft, with his fainting women setups, his white coated doctors, or his little children at signings. His scripted backdrops are as fake as his styrofoam Greek columns in Denver, except his eight years actually are resembling a Greek tragedy.

the Great Fire of Rome, which many Romans believed Nero himself had started in order to clear land for his planned palatial complex

That sounds like Obama, knowing how to burn things down to make room for his mecca of socialism. Nero persecuted Christians as well. heh

False premise is a tried and true tactic of the left, but Obama acting as messiah lays it on especially thick. 🙂

Paying substantially more for higher deductibles and a much more restricted provider range.

But I’m not going to quibble over a few million people here or there.

You know who else didn’t quibble over a few million people here or there?

“One death is a tragedy; one million is a statistic.” – Joseph Stalin