Hillary Clinton can run, but she can’t hide, from Obamacare debacle

Hillary Clinton can run, but she can’t hide, from Obamacare debacle 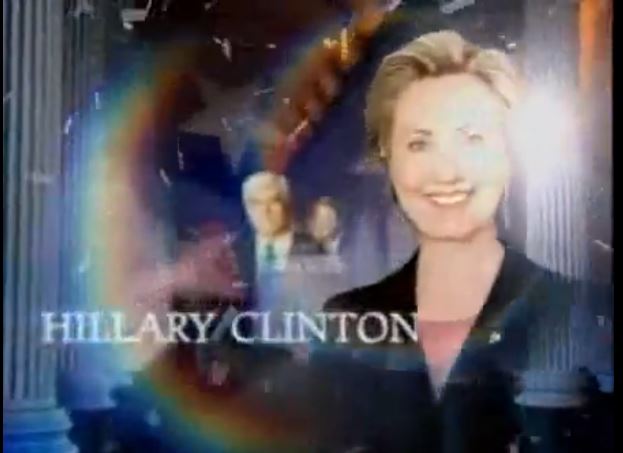 In an ironic twist, Bill Clinton is now distancing himself from Obamacare. In an interview earlier this month, Bill Clinton told online magazine Ozy:

I personally believe, even if it takes a change to the law, the president should honor the commitment the federal government made to those people and let them keep what they got.

However, this is a far cry from Hillary Clinton’s previous support of Obamacare.  As Professor Jacobson pointed out on Wednesday, Hillary was more pro-mandate than Obama.

Now, likely in looking forward to the 2016 election, the Clintons have suddenly changed their tune.

But with an established track record of supporting Obamacare, will Hillary be able to successfully distance herself from the policy’s unpopularity? Here are just five examples of Hillary’s support for the Obamacare:

Hillary Clinton’s initially reacted to the Supreme Court’s ruling on Obamacare by saying:

I am very pleased- that’s how I hoped it would turn out. I think it’s a great moment just to think about what this will mean for the millions and millions of Americans who have already benefitted from the Affordable Care Act, and so many more will continue to do so. There will be a lot of work to do to get it implemented and understand what the opinion says, but obviously I was quite pleased to hear the results.

2. Hillary said we should implement Obamacare and then “take a deep breath”

Maybe Clinton thinks that everybody just needs to take a deep breath about the Obamacare’s website fiasco, too. Mlive reports that at the Economic Club of Grand Rapids’ annual dinner, Clinton said:

“It’s a tough one for us, and I want to see the good parts of the Affordable Care Act implemented.” “Then I think we should all take a deep breath and see where we are, and see what more we can or should do. 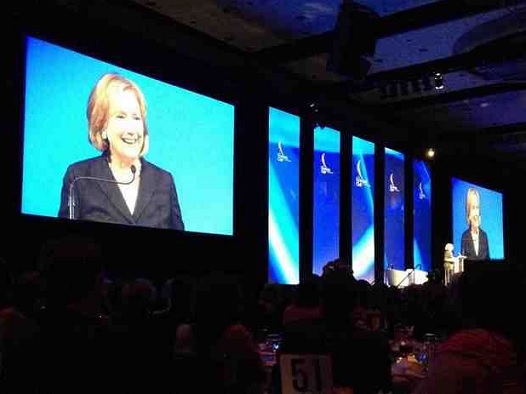 3. Hillary defended Obamacare by calling it “the Law of the Land”

In September, Hillary spoke out against a potential government shutdown by defending Obamacare and saying, “It was upheld by the Supreme Court, it is the law of the land.” 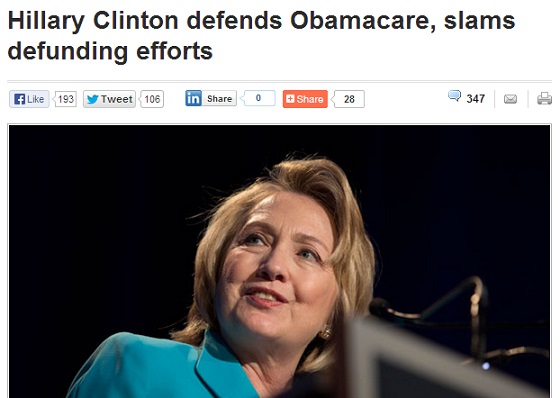 In a “Meet the Press” interview, Hillary spoke favorably of the president’s timeline for health care reform:

I applaud the president for taking it on right off the bat. There are many problems we’re dealing with in our country, and certainly he could have said, ‘Ok- fine we’ll get to it when we get to it.’ But he’s waded right into it.

5. Hillary promoted a “critical mass of progress” for health care

In 2009, Hillary went on CNN and hyped up the reasons why Obama’s healthcare reform should be enacted. She told CNN:

What the president has said, and what I believe is the right approach, is that this can’t be put off any longer.

She went on to became nostalgic about her own health care policy days, and told CNN that she is hoping hoping to see a “critical mass of progress” for Obama’s health care.

Hillary will try to run from the Obamcare debacle if she runs for President in 2016.  As the above examples show, and surely there are more out there, Hillary can’t hide from her support for mandates, Obamacare, and ultimately, the loss of health plans by tens of millions of Americans.

Include the Benghazi debacle and her quick profit in cattle futures and it will get rough. I would like to think she will have a tough primary but I believe Bill will suck out all the money and already has endorsements from none other than Chucky Schumer.

If past history is anything to go by, she’ll have a harder time against a primary opponent than she will against the wimpy RINO candidate the RNC chooses for us.

Can’t hide? Of course she can hide. She’ll hide where all leftist liars hide — in the media weeds.

That’s what she thinks, anyway. And the media would normally oblige her. But their infatuation with Elizabeth Warren should change all that.

She’ll blame it on the video again.

The one with the amateur lawmaker saying, “If you like your health plan you can keep it. Period.”

Imagine the horror if the ShrillaryCare atrocity gets detonated on top of the OBOZOCARE debacle ! It will be worse than when d-cRAT Truman had TWO atomic bombs dropped on Japan – now the d-cRATs are nuking America!

Nahh!!
She’s OK.
She will say something totally brilliant like:

It depends upon what the meaning of the word ‘is’ is. If the–if he–if ‘is’ means is and never has been, that is not—that is one thing. If it means there is none, that was a completely true statement

Whatta they think: that she was shot by George Zimmerman?

It’s hard to support something, Hillary, when you don’t know what’s in it. Of course, we all know Hillary does and she will only make things worse if she were President.

“WHAT DIFFERENCE DOES IT MAKE..?”

Who would Vince Foster vote for?

Obamacare isn’t the only thing she needs to run from.

Hillary lost the nomination that was hers to an incompetent junior Senator who was selected by the Ezra Klein wing of the democrat party.

Next time around the Ezra Klein faction will be joined with the Amanda Marcott faction and they will nominate Elizabeth Warren. Hillary is old and worn and none of the young power people of the democrat party identify with her.

Unless the Republicans come up with something better than a Dole, McCain or Romney we can get used to saying, “President Warren”.

[…] 2016. Already “tie Hillary to ObamaCare” has a video and many articles which seek to plaster Hillary to the monstrosity called ObamaCare. These Republicans and conservatives have a powerful ally in Obama Dimocrats and those who […]