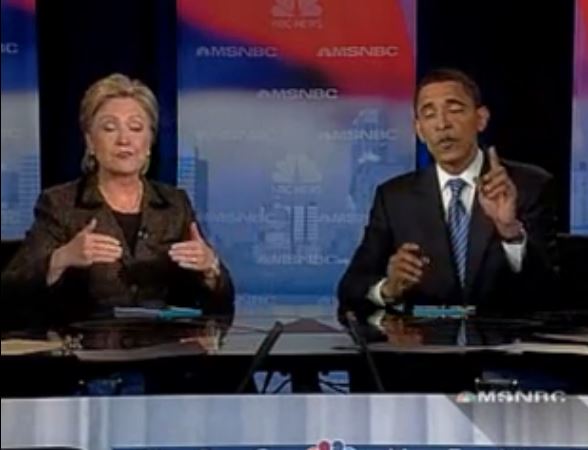 Hillary supporters are trying to distance her from the Obamcare debacle.

Don’t talk about it, she is told.

Meanwhile, Bill is stabbing Obama in the back by telling him to honor his promise to the American people that they could keep their health plan.

It’s all about the mandate.  Forcing people “into the system” no matter what.  Even when that means they cannot keep their health plan.

Democrats who are up for reelection are running from the mandate.

But remember, Hillary was more pro-mandate than Obama.

it surprises me how many miss that obama has implemented the items hillary didn’t get to do in her first term.
she got her programs, he gets the blame.

“…obama has implemented the items hillary didn’t get to do in her first term.”

THAT was a Freudian camisole…

if you mean her first term it was on purpose and how I always phrase it.
she was the power there, many senior military advisors said so also.
she is evil.

Oh, I agree! Just as I consider Moooochelle the more dangerous of the Obama couple.

I flip back and forth on her/obama, both overshadowed by jarrett IMO.

“Two for the price of one.” Demanded VP’s office space. I think she was the muscle and he was the relatively appealing public persona (though he always seemed like a lowlife to me). She had to get something big an exchange for her indispensable work of suppressing bimbo eruptions.

All of those professional, full-time pundits wondering if Obama was so disconnected he didn’t understand what ObamaCare had in it, or hadn’t bothered to think through the mandate idea – why it was needed for their “universal” scheme to work, need to be asked to watch this video. Then explain to their viewers and readers why anyone should pay any attention to what they pontificate about anymore. Or confess, “We’re part of the Washington Political Class elite who are here to run your lives. We just pretend to be conservatives, moderates, or regular folk. It’s just an act.”

There’s never been enough room to shine even a single ray of light between the two of them. Two different faces of the same beast.

I was truly amazed that Hillary folded her cards in her run against barry. I mean as a student of the Alinsky thought processes and procedures:
“The third rule of ethics of means and ends is that in war the end justifies almost any means….”

Granted, barry also a Alinsky student, bu-but she could’a played the female thingy, hard and heavy on him.

and on this, I would say that for once in his idiot life, harry reid hit the nail squarely on the head concerning barry winning.

“light-skinned” appearance and speaking patterns “with no Negro dialect, unless he wanted to have one.”

Who knows, hopefully Ted Cruz will counter The Left and The Rino’s and bullhockey, win the Presidency and begin to uplift a fallen nation, OURS!

Imagine the horror if the ShrillaryCare atrocity gets detonated on top of the OBOZOCARE debacle ! It will be worse than when d-cRAT Truman had TWO atomic bombs dropped on Japan – now the d-cRATs are nuking America!

If you look at the bill Landrieu and Feinstein are pushing, it also MANDATES insurers grandfather in current policies, even though the various states would have to approve them and it would destroy the insurers by keeping low premium producing grandfathered policies and still having to pay out significant claims for the people that signed up on the exchanges.
Which is what Obama wants. Destroy the insurers so all that is left is the govt. Upton should retract his bill and let the Dems swing in the breeze instead of getting caught in the trap of approving a Dem plan where the govt. MANDATES what a private company must do. Again.

As it is being described, it is a clearly unconstitutional attempt, but that’s not the point.

They just want to give Democratic Senators who voted and gushed over PPACA a chance to vote against the most unpopular part (thus far) before facing voters again. It wouldn’t pass the House anyway, and would likely be vetoed by Obama.

ALL these plans and the “delay” ideas just bankrupt the Treasury as the expensive new benefits will be paid out without all those mandated enrollees paying double premiums to subsidey them. Those are already taking effect.

It’s like trying to repair a massive machine by replacing different parts while it’s running. You are more likely to lose limbs than fix anything.

I hope we are collecting videos of Elizabeth Warren advocating for Obamacare, too.