Running to Govern is Much Different Than Running Government

Running to Govern is Much Different Than Running Government

President Obama employed cutting edge information to get re-elected. He didn’t show as much interest in his implementation of Obamacare. 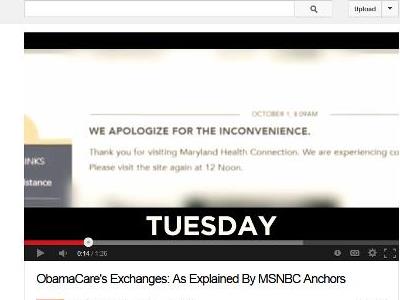 This year’s big technology news is the failure of the introduction of Obamacare’s healthcare exchanges.

Last year, even before the election, President Obama’s IT operation got noticed. A June 2012 article in Politico asserted:

The depth and breadth of the Obama campaign’s 2012 digital operation — from data mining to online organizing — reaches so far beyond anything politics has ever seen, experts maintain, that it could impact the outcome of a close presidential election.

The general approach was described by an article in MIT’s Technology Review:

But underneath all that were scores describing particular voters: a new political currency that predicted the behavior of individual humans. The campaign didn’t just know who you were; it knew exactly how it could turn you into the type of person it wanted you to be.

And after the fact Time Magazine concluded:

That data-driven decisionmaking played a huge role in creating a second term for the 44th President and will be one of the more closely studied elements of the 2012 cycle. It’s another sign that the role of the campaign pros in Washington who make decisions on hunches and experience is rapidly dwindling, being replaced by the work of quants and computer coders who can crack massive data sets for insight. As one official put it, the time of “guys sitting in a back room smoking cigars, saying ‘We always buy 60 Minutes’” is over. In politics, the era of big data has arrived.

In terms of winning the election, the Obama team was creative and ahead of the curve, exploiting knowledge that the Romney campaign didn’t. The campaign leveraged its support in Silicon Valley into money and, more importantly, into talent.

But that hasn’t been the case with President Obama’s signature achievement, the Affordable Care Act, or Obamacare.

Do you remember that just a few months ago, Thomas Friedman assured us that Obamacare would usher in a new era of IT innovation?

The October 1, rollout of the Obamacare system has been marked by “glitches” and it doesn’t appear to show the innovation that Friedman promised.

James Taranto quotes a big fan of Obamacare to describe the rollout more accurately (via Instapundit):

Let’s let longtime ObamaCare enthusiast and Journolist founder Ezra Klein answer that: “So far, the Affordable Care Act’s launch has been a failure. Not ‘troubled.’ Not ‘glitchy.’ A failure.” A language note: One suspects the ObamaCare debut will make it impossible for anyone ever again to use the word “glitches” unironically.

The federal health care exchange was built using 10-year-old technology that may require constant fixes and updates for the next six months and the eventual overhaul of the entire system, technology experts told USA TODAY.

In order to get (elected and) re-elected, President Obama had his campaign develop and apply its own cutting edge technology, but to implement the most significant piece of legislation to his credit, the President outsourced to others who used outdated technology.

The Tea Party is the designated villain right now but the exchange roll out proves their skepticism of govt is justified.

This is aside from the internal contradictions that makes the implementation of Obamacare impossible.

The administration believes it will be possible to roll through a difficult period, get as many people as they can into the system, and just hold out until things stabilize. The insurers are not sure this will be possible. Everyone involved is guessing.

For me, and for other critics of Obamacare, the problem with the law was never about these technical matters. I didn’t think the system wouldn’t work because the government couldn’t build a website, but because the basic health economics involved is deeply misguided and would take the (badly inadequate) American health-financing system in the wrong direction. So these problems only seem like a prelude to other, larger problems. But Obamacare was also always going to be a test of the sheer capacity of the administrative state to actually do what it claims the authority and ability to do. At this point, it looks as though we may be witnessing a failure of the administrative state on a level unimagined even by its staunchest critics. We may be. But we’ll have to see.

I can accept that the Obama administration believes its own hype that Obamacare could work. However, given that it didn’t heed warnings that its approach to the technology wasn’t working, it makes the software failure even more inexcusable.

Admittedly, programming to determine who is persuadable and how to persuade them is an easier task than navigating the complex rules of the ACA. Still, one should have expected that the administration would have been as committed to implementing Obamacare successfully as it was to winning the election.

That it wasn’t is a huge indictment of the administration.

They want it to fail so they can usher in single payer.

Half a billion dollars for a web site that doesn’t work. What did they spend the money on?

Never expect any management skills from the likes of a community organizer as surely such expectations will not be fulfilled.

With that said, we must look to someone in the administration that has more than an ounce of brains and that would be Valerie Jarrett who in turn is a too of the radical socialist left and doesn’t want this country to succeed with anything.

The writing on the wall is very clear to me…

“The campaign didn’t just know who you were.”

That says it all.

Drudge says Katherine Sebelius is on the run, and they “… hope she isn’t in the White House catacomb under interrogation by Valerie Jarrett about her department’s incompetence.”

Don’t ya wonder how many people are going to let their lives work be overshadowed and their reputations ruined by covering for Obama. Any one with a lick of sense knows that Obama couldn’t resist his play to pay MO when hiring a company to program Obama care web site and Sebelius had no say.

Be sure to watch 60 minutes tonight to see why he campaigns so much.

The best USA Today quote is:

“That’s the difference between competence and incompetence.”

At this point, it looks as though we may be witnessing a failure of the administrative state on a level unimagined even by its staunchest critics.

At this point we should hear loud and frequent warnings from Republican voices saying just that, and following up with “That the Obama admin wasn’t as committed to making its health IT work as it was to winning elections is a huge indictment of the administration.”

Where are the Republicans? Still waiting silently for their turn at the trough?

This is my view also. Getting elected and reelected was of utmost importance to Obama. Passing a massive law to increase the powers of government over citizens was also very important to Obama and Pelosi and Reid.

But their law gave little thought to the delivery end of medical care, so it’s hard to believe that actual health care was a high priority for them.

Moreover, if any Dems are bothered about the many people who are losing their insurance and facing newly unaffordable premiums, they haven’t shown it. Ergo, making actually affordable insurance more available to citizens could not have been a high priority either.

The computer “glitches” may be embarrassing, but they’re just a bump in the road (to borrow a phrase) along the way to destroying the private insurance market. And it’s only a little bump, because they’ve made vast strides in that direction already.

If there are actually more uninsured people on January 1 than on December 31 (which seems quite possible), that’s not necessarily a failure from the Obama regime point of view.

The IT design for winning the election wasn’t as complex. The campaign was targeting voters and not all voters, just the gullible, naive and the under informed. The ACA website had to manage and process the public contacting the site, without knowing how many hit were going to happen. They bit off more than they could chew and it shows. It is doubtful that they will get this “fixed”.

I would say that campaigning is the only thing that Obama is good at, but the fact is he sucks at that too. He needed a big pile of money, professional assistance and the media cheerleading for him to win both times.

I’ve never fathomed how people could see that hectoring, gaffe-prone punk as likeable, or as a wise, responsible leader.

But when he can say plainly and emphatically “I will not negotiate!” and the media lapdogs run out and dutifully say “Those Republicans hostage-takers refuse to budge in their demands!” — there’s part of the answer.

‘Barack Obama’ (or whoever he really is) didn’t run to govern, but to destroy.

With 3 years, more than a half billion dollars, and (rarely mentioned) the fact that most software/internet moguls are raving liberals, you would think things would not have been such an epic fail.

An election threatens their power, so they throw everything they have into it. ACA just threatens the lives of ordinary Americans, so they just need a pretense of effort