The Syrian Electronic Army breached the Twitter account of GlobalPost on Monday and claims to have hacked the outlet’s website, in retaliation for an article the outlet published about the group earlier this month.

(Note: the unauthorized tweets related to today’s incident have since been deleted from the GlobalPost Twitter account. Screen capture below).

.@globalpost has been hacked.

Kim also cited a GlobalPost article as the reason why the outlet was targeted by the SEA.

This is why the Syrian Electronic Army claimed to have hacked us http://t.co/Gc4h6rvrod via http://t.co/aGMD2oK8FO

SEA told The Hacker News that they targeted the news outlet because “GlobalPost published innocent peoples’ names in their article and said that they are “SEA members.”  SEA added, “We were able to delete that article, but we didn’t, we leave the choice for them.”

The article in question is this one published on September 3rd at GlobalPost, entitled Syrian Electronic Army revealed: Anonymous hacks SEA website, dumps data.  It claims that a data leak identified several members of the SEA.

This is why the Syrian Electronic Army claimed to have hacked us http://t.co/Gc4h6rvrod via http://t.co/aGMD2oK8FO

It’s a claim that’s been making the rounds online for weeks.  SEA has repeatedly denied such claims.

In an interview with Mashable last month, representatives responding from an email account associated with SEA told the website:

We can guarantee our website has never been hacked, those who claim to have hacked it should publish their evidence. Don’t hold your breath. In any case we do not have any sensitive or personal data on a public server. We are a distributed group, most of what we have and need is on our own machines and we collaborate on IRC.

This is merely the latest in a long string of attacks from the SEA against media outlets and other targets.

Earlier this month, the hackers targeted a couple of FOX TV network accounts and the US Marines recruitment website.  And late last month, it hit the NY Times and a Twitter service through a phishing attack on a DNS registrar associated with the sites.  The FBI later issued an advisory about the SEA after the group threatened that it may retaliate if the US carried through on a strike against Syria.

In an update posted to its website this afternoon, GlobalPost says it never lost control of the content published on its website, but confirmed that SEA did gain control of the outlet’s Twitter account.  The outlet didn’t elaborate as to how the SEA breached its accounts and whether it was by way of a technical “hack” or the hacking group’s typical phishing methods.

Either way, the news outlet seems to be handling the matter in its own way: 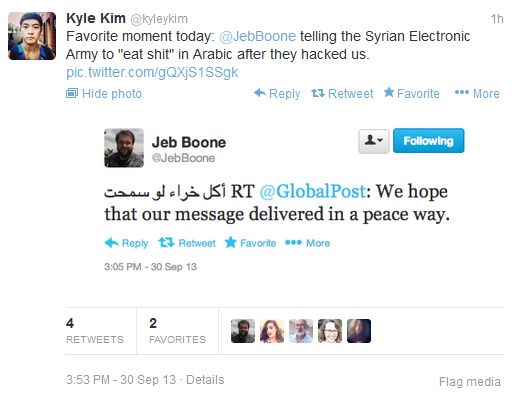 Somehow I suspect (a) GlobalPost won’t be taking down the article with which SEA took issue and (b) this probably won’t be the end of this spat, after that tweet.  Stay tuned.

The joke is on Kyle & Jeb . They are not Arabs.

Btw what south parky names. Must be gay.