The Syrian Electronic Army is claiming credit for defacing the recruitment website of the US Marines.

The official US marines website was breached to post a message from their bros in Syrian army| http://t.co/qvKXyKB771 pic.twitter.com/3EfHHAFwIu

Marines.com, which is operated separately from the official Marines website, was changed in the early morning hours on Monday to display a message from the hacker(s).  The message told US soldiers that Obama is “a traitor who wants to put your lives in danger to rescue Al Qaeda insurgents,” and encouraged Marines to defy orders and concentrate on defending their homeland instead.  It also suggested that the army of the Syrian government should be considered an ally to Marines, rather than an enemy.

The defacement also included several photos purporting to be those of US military personnel, holding messages opposing military intervention in Syria (it should be noted the authenticity of these photos has not been verified anywhere that I could locate at the time of this writing).  The same photos have been circulating around corners of the internet for days on social media and sites like Reddit.  The Syrian Electronic Army has also been tweeting those photos for the last several days as well. 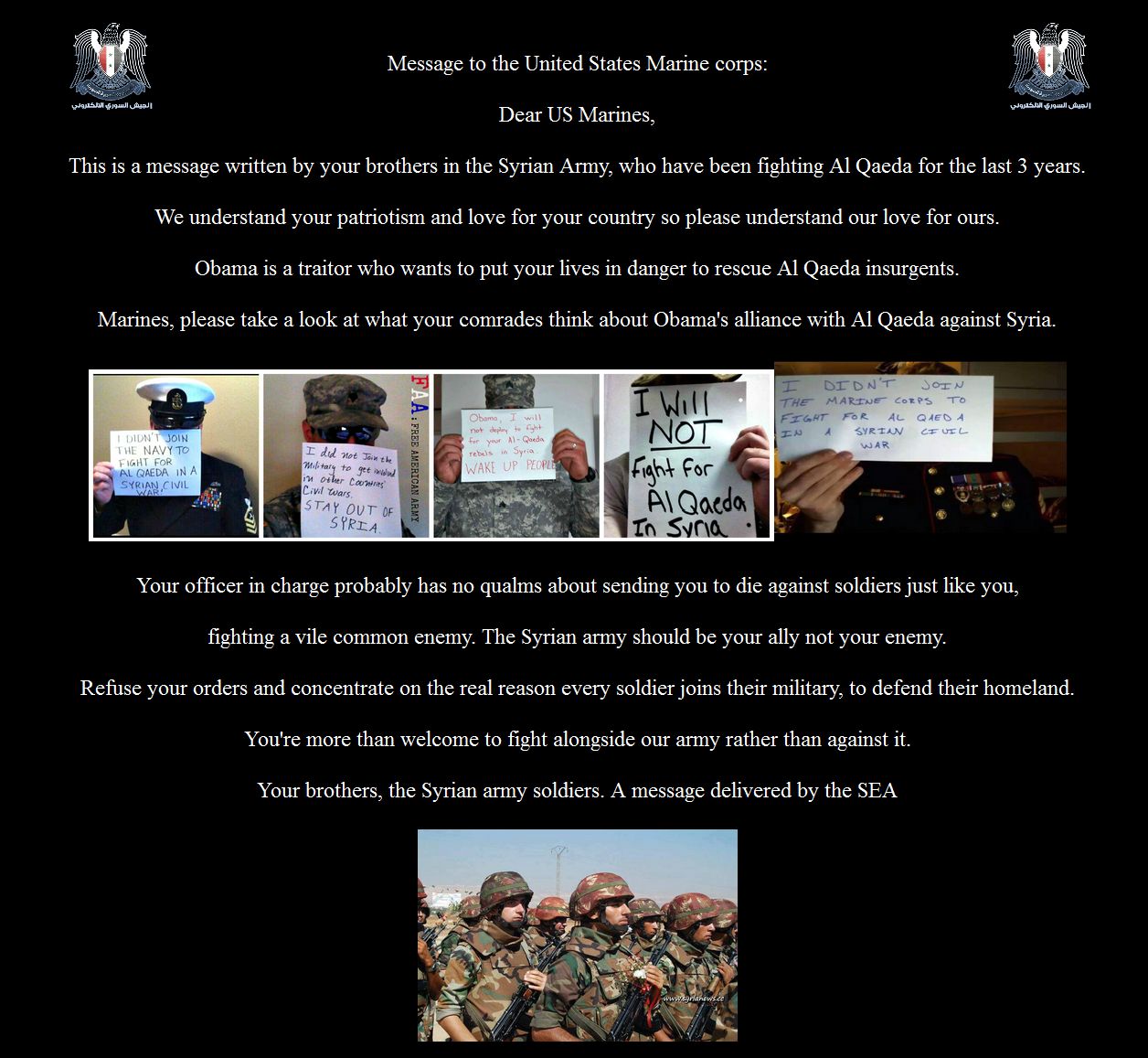 Of course, no military action has been ordered yet, while the Obama administration awaits authorization from Congress.

The Syrian Electronic Army most recently disrupted the websites of the NY Times and Twitter after it carried out a phishing attack on the registrar of those sites’ domains.  The hacking group has said it may retaliate if the US does carry out a strike on Syria.

The full text of the message on the defaced website read as follows before the site was returned to normal:

This is a message written by your brothers in the Syrian Army, who have been fighting Al Qaeda for the last 3 years. We understand your patriotism and love for your country so please understand our love for ours. Obama is a traitor who wants to put your lives in danger to rescue Al Qaeda insurgents.

Marines, please take a look at what your comrades think about Obama’s alliance with Al Qaeda against Syria. Your officer in charge probably has no qualms about sending you to die against soldiers just like you, fighting a vile common enemy. The Syrian army should be your ally not your enemy.

Refuse your orders and concentrate on the real reason every soldier joins their military, to defend their homeland.

You’re more than welcome to fight alongside our army rather than against it.

Your brothers, the Syrian army soldiers. A message delivered by the SEA

Warmonger Obama hiding behind Congress after his idiotic remarks. Leading from behind.

As much as I’m against us doing ANYTHING in / to Syria (let those assholes all kill each other, who cares ? ), I’d say that it looks like ‘defacing a website’ is about to be the LEAST of their problems over there.

Our Marines will deface their COUNTRY.

“…while the Obama administration awaits authorization from Congress.”

Five years into the Obama administration and this is the first time I’ve seen this phrase.

Nat’l Review Online, The Corner, is maintaining a log on events re: possible attack on Syria. Latest entry below. Check out the last sentence. LOL. Even NATO has abandoned Obama.

“UPDATE: Monday, 11:52 a.m. NATO secretary-general Anders Fogh Rasmussen said at a conference today that he has “concrete information” that the Assad regime is behind the chemical-weapons attack.

“Without going into details, I can tell you that personally I am convinced, not only that a chemical attack has taken place… but I am also convinced that the Syrian regime is responsible,” he said. Rasmussen called for “firm international response” and said not acting would “a dangerous signal to dictators all over the world.”

Rasmussen added that the action needed would be a limited response and not require NATO’s involvement.”

I read an interesting piece by Donald sensing suggesting that Obama is deliberately provoking a Constitutional crisis.

However you way you look at it, what Obama did was politically brilliant, given the position he had put himself in. Republicans are so far behind this guy it’s sad.

Thank you for the link. However, I am not actually sure Obama is provoking this potential crisis deliberately, It could just as easily be another example of ineptly chosen wording.

But it sure didn’t take long for “senior administration officials” to tell news outlets that Obama would attack even without Congressional authorization. Even David Gregory reported that on NBC early Sunday morning.

What a team, eh?
Associated Press:
Assad is like Hitler: Kerry
http://www.nypost.com/p/news/international/assad_is_like_hitler_kerry_8oZFWS6QEYDP3AUCS476vO

And one wonders why he got him a secret CIA hat while plying the Mekong Delta AND then castigated EVERY fighting man or woman during Vietnam, eh?

My humble opinion is, Barry pick Lurch for his 2016 running mate..

I have wondered for years why our armed forces have not resisted Obama’s bs. Good to see that some of them understand that they swore an oath to uphold the constitution, not the dictator in chief.