The Syrian Electronic Army seems poised to stir up trouble as the world continues to debate over what to do about Syria.

Zero hour approaches, we will not spare any individual. #SEA #SyrianElectronicArmy #Syria

The group warned last week that it may retaliate using “methods of causing harm” for the US economy if the US does strike Syria.

The FBI issued an advisory last week, emphasizing the need for heightened awareness of the potential for SEA’s attacks on targets and urging organizations to take appropriate security precautions.  It also warned that groups or individuals sympathetic to the SEA may also be observed participating in attacks on US websites and networks. 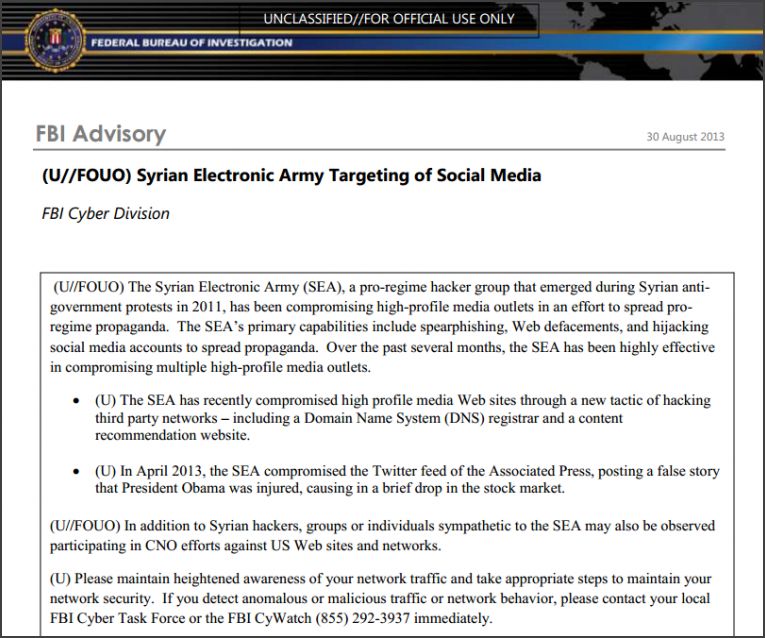 The SEA has been around for a couple of years and has a history of targeting social media accounts and websites of Western news outlets and other companies.

Earlier this week, SEA claimed credit for the defacement of the US Marines recruitment website, in which users were directed to propaganda from SEA suggesting that US military members defy orders and consider the Syrian army an ally rather than an enemy.

The group also recently disrupted Twitter, the NY Times, and the Huffington Post UK by targeting Melbourne IT, a domain registrar associated with those companies.

I could not get on this site yesterday for a while and wondered if the SEA had taken it down for being pro-Israel.

The NSA is all over this! Well, will be soon, anyway. Right after they stop spying on Americans, starting January 1,
UPDATE:

Anonymous in all but name.

Well, if social networks and blogs start going down, that’ll give some people a head start in coming to terms with their severe internet addiction thingy 🙂

Well, the Syrian Electronic Army hit my website, I think. It might have been the Birthers. Or even me, after a few too many Buttery Nipples, but I don’t remember blacking out or anything:

Oh joy! The regime can turn off our internet and we will think it was Syrians. How clever is that?

[…] FBI is concerned enough about the Syrian Electronic Army to issue an advisory. The S.E.A. has already hacked the New York Times website which has been operating for years and […]