Treatment facilities have sprung up in recent years, but a psychiatric hospital in central Pennsylvania is now set to become the country’s first facility of its kind to offer an inpatient treatment program for people it diagnoses with severe Internet addiction.

The voluntary, 10-day program is set to open on Sept. 9 at the Behavioral Health Services at Bradford Regional Medical Center. The program was organized by experts in the field and cognitive specialists with backgrounds in treating more familiar addictions like drug and alcohol abuse.

“[Internet addiction] is a problem in this country that can be more pervasive than alcoholism,” said Dr. Kimberly Young, the psychologist who founded the non-profit program. “The Internet is free, legal and fat free.”

Similar programs on an outpatient basis have launched in other areas of the country.  The Restart Addiction Center in Redmond, Washington functions as a retreat program “to assist participants with an Internet and/or computer based behavioral addiction to break the cycle of dependency.”  As Crosscut.com notes in its coverage of Restart, the US isn’t the only country concerned about the issue, though many professionals remain skeptical about whether or not internet addiction is an actual condition, so to speak.

When I arrive at Restart, a delegation from the Chinese government has just left. Hilarie Cash, psychotherapist and Restart co-founder, explains that Internet addiction is a growing problem for China. The delegation came on a fact-finding mission. “They’re very worried right now,” says Cash. “Whatever they’re doing isn’t working, and the situation is getting worse.”

And Japan recently made news with its plan to introduce internet fasting camps, where they aim to encourage youth to spend less time in the virtual world and to communicate with people in the real world.

If this video below is indicative of anything you’ve ever experienced (I know I’ve been there), maybe forcing ourselves to think about how much time we spend with the internet and our gadgets really isn’t such a bad idea. 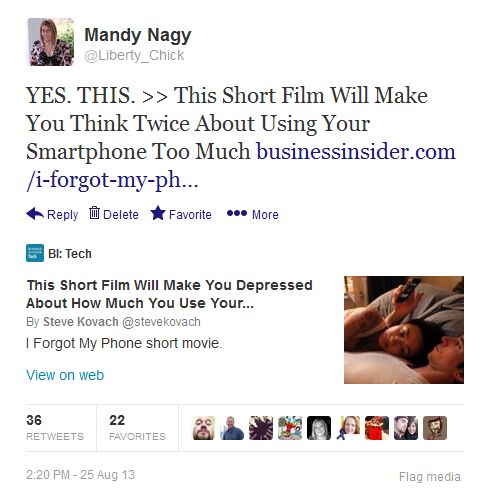 Have things really gotten this bad?

For many, the term “internet addiction” seems more an excuse for one’s inability to practice self-control, regulate time and tend to real life responsibilities and relationships. I’m not going to argue that here, I’ll leave that to the professionals.

But maybe the fact that internet addiction centers are popping up across the country doesn’t have to be only about whether or not internet addiction is real. Maybe this is also an opportunity to realize that internet and smart phone use has had a significant impact on the behavior of society as a whole. There are numerous positive benefits, but like anything, moderation is key.

The burning question is: will they have a blog or forum? And offer online courses?

Each patient in the program, which costs $14,000 out-of-pocket because insurance does not cover the expense, will be psychologically evaluated after undergoing a ‘digital detox.’

I wonder whether the Affordable Care Act will force insurers to cover things like this now, in aid of “mental health parity” or whatever they call it.

Oh the irony in reading about it on Legal Insurrection…

How depressing. This makes me especially grateful I don’t have one of those ‘smart’ phones. I’m so tired of people having their faces buried in technology. Many young people don’t engage in conversation anymore. This texting and such is also contributing to a lot of auto accidents and death. We took a 11 mile trip, in the country, to our local grocery store and had two vehicles almost collide with us!!! It happens all the time here now. It’s worse than these bozo’s being on prozac (have that problem too).

I’ve been an addictions professional x 29 years. When you see stuff like this, just ignore the word ‘addiction’ and replace it with the correct term: obsession. An obsession can be mild and fleeting or it can become pathological and detrimental. But it is not addiction. At mild levels it’s a matter of personal discipline (and/or lack thereof). If it goes pathological, it is indicative of obsession and is likely a symptom of a bigger mental health issue, not a stand alone problem that begins and ends with internet use. Unable to access the internet, such an obsessive person would likely develop some other obsession. Like White House golf.

A friend once asked me to speak to her husband, who she feared might be abusing marijuana. “Henry,” he said, “I’ve been smoking marijuana pretty much all day every day for thirty years. C’mon… if I was addicted, don’t you think I’d know it?”

I can stop any time I want…

Does the treatment center have WiFi?

1.)Admitted we were POWERLESS over our i-Thingies, that our silly little lives had become unmanagable.

2.)Came to believe that a Power greater than ourselves could restore our cognitive thinking to literacy.

3.)Made a decision to turn our Tweeties and our F***bookies over to the care of a cursive handwriting GOD.

4.)Made a fearless and thorough inventory of ALL the shallow, insipid, digital masturbatory devices and apps that have brought life so low.

5.)Admitted to God, ourselves and another human being the exact nature of our baffling digital obsessions.

8.)Prepared a list of all those we had been loutish to due to our NEVER looking them in the eyes.

9.)Made direct amends wherever possible for rear-enders, footstomps, inattentiveness, discourtesy and absence of simple old school thoughtfulness and all other ADD symptoms.

11.)Sought through prayer and meditation to inprove our cognitive contact with other human beings in addition to the other T-Rex folks who share our views on this subject.

12.)Having had a cognitive, verbal, cursive, critical thought awakening as the result of these Steps, we tried to carry this message of a BIGGER Life than APPS provide to other people and to Piss Them Off Regularly.

Now…Newcomers…this cranky-proud T-Rex is off to a Labor Day BBQ where NOBODY will be pounding on i-Thingies or even trending on Tweeeety!!