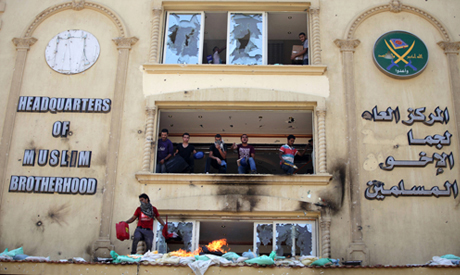 I have always held out hope that the Egyptians would recall their proud, pharaonic roots and quell the growing Islamo-extremism within their country.

Today, I caught the first positive news I have read about the region in a long time: An Egyptian court has banned the Muslim Brotherhood and its NGO, leaving the Islamist group with no legal status. A court in Cairo has banned “all activities” by the Muslim Brotherhood.

The ruling on Monday applies to the group, its NGO and “any organisation derived from it,” judges said.

The court also ordered the interim government to seize the group’s funds and establish a panel to administer its frozen assets until any appeal had been heard.

A Brotherhood source told Ahram Online the verdict would be appealed within ten days.

The Islamist group existed outside of Egyptian law for decades and was only officially registered as an NGO in March 2013.

Laying out its reasoning, the court reached back to the Brotherhood’s founding as a religious revival group in 1928, when Egypt was in the last tumultuous decades under a British-backed monarchy. From its beginning, the court argued, the Brotherhood has always used Islam as a tool to achieve its political goals and adopted violence as its tactic.

The state newspaper Al Ahram elaborated further, declaring on its Web site that the court found the Brotherhood had “violated the rights of the citizens, who found only oppression and arrogance during their reign” — until fatigued citizens had risen up this summer “under the protection of the armed forces, the sword of the homeland inseparable from their people in the confrontation with an unjust regime.”

And I have some almost good news on the Malawi Museum, which lost over 1000 artifacts during a wave of violence that followed the ouster of Mohamed Morsi: Recent reports indicate over 100 objects have been recovered.

One of those items was a statute of the ancient Egyptian Lord of the Underworld, Osiris: Hopefully, as an organization, the Muslim Brotherhood has truly “gone West” to join Osiris and the Egyptians can start making progress in healing their country socially and economically.

I read this morning that Europe has declared the welfare state dead. When I read that Egypt has outlawed the Muslim Brotherhood I was happy for Egypt, I have shared your hope that Egyptians would remember their true heritage.

But when I think of both those losing ideologies “going west” it chills my blood. Just yesterday I learned that all those dogooders in MN can claim credit for donating murders to that Mall in Kenya.

Good start! Now if we could wean the Obama administration from the Muslim Brotherhood we will be making great progress.

Most of the Muslims I knew in Egypt weren’t too interested in their pharaonic past, except as it brought in tourists. The Copts are the continuation of the ancient culture, made monotheistic six hundred years before Muhammad. However, I have been very encouraged by the numbers of Muslim Egyptians who reject the extremism of the Brotherhood and the Salafis. It’s going to be rough, but there’s hope.

It’s urgent for the new regime to get the country under control and get the tourist dollars flowing in again.

Always been poor people in Egypt. To survive, the government underwrites subsidies on bread. And, the fuel oil Egyptians buy by the gallon, by which they cook.

By no means a “modern” country. Though under Mubarak, not just safe. But tourists came in droves.

When Mubarak’s ruling days ended … it seemed like an “arab spring” broke out. But this soon turned into nightmares. The middle class, which had done well during Mubarak’s time … and, perhaps, thought they’d end up in leadership positions … watched as the Muslim Brotherhood gained ground. And, took over. (Everything. But not the military.)

Mubarak, a military man, himself, knows full well you can’t run countries in the arab world without strong militaries. General Sisi now seems to be in good control.

Plus, he’s eliminating the traffic out of Gaza, which only provides terrorists. Some who killed Egyptian policemen.

Currently, the tunnels between gaza and Egypt have been broken open. Flooded. And, distroyed. And, there’s now also a corridor … where Gazan homes were destroyed … And, a few families are now located on the Egyptian side. Living in tents. Lots of new “refugee” encampments.

Up ahead it will be difficult to pick out one group of refugee tents from another. Jordan now also has some. Lebanon, you knew of. And, the “springs” have been forcibly removed.

The saud’s are the ones who fund the havoc. Sure. Using “others.” Like the Somalies.

In America? We just get wall-to-wall propaganda. Or people would have been reminded that the Assad Family has been ruling Syria for close on 50 years.

Will America end up with “ruling families?” The Kennedy’s grip has weakened. But you still have the Clinton’s. The Romney’s. The Rockefeller’s. And, da’ Bush’s. Each election cycle we keep seeing the same old faces.

And, I wonder why.

I wonder what the US response will be if Malik Obama is arrested, sent to Egypt and is waterboarded………..

So long as he stays in the US he’s golden. No way that Dear Leader would turn his half brother over to the Egyptians.

Pharaoh-onic Roots? In what world or dimension are arabs connected to ancient Egypt? The closest remnants to ancient Egypt reside with the Copts, and even that is a bit of a stretch.

May as well claim arabs and turks are Jews because they ruled the Holy Land.

Outlawing the muslim brotherhood is easier said that actually eradicating it. Really, get a grip!

last sentence should read “than”. my bad.

In Islamic populations you either have Sharia or a strongman dictatorship. To pretend that this move is “the people of Egypt” is ridiculous. The people voted in the MB, and the military, a dictatorship by committee, has chosen to disregard the will of the people and democratic ideals, and rule instead.

Muslims can’t have democracies. It just leads to Sharia. We have to acknowledge that in Muslim countries a dictator, who will protect the rights of religious minorities (including the wrong types of Muslim) is the lesser of two evils.

This is actually the philosophy that Putin/the Russians have been espousing for a long time. You can’t always have democracies. It’s a sad realization, but as long as the world has Islam, it is not safe for democracy.

“Proud pharonic roots”, Leslie? The Copts are not making or passing Law in Egypt, the Muslims are. Besides, the “pharonic roots” are just as tyrannic as the Islamic ideology that is causing the problems. The only freedom in Egypt came from Judaeo-Christianity.