I graduated from Hamilton College in 1981.

This weekend is Homecoming. And as I understand it, there will be a meeting of the Board of Trustees.

I have no illusions that the Board of Trustees has the desire or ability to address Hamilton’s recent problems given the history of how politicized education has become on campus.  But I hope that someone with sense will attempt to address what has become a poisonous situation on campus.

The controversy over the Hamilton segregated then desegregated diversity program understandably has focused on the racial-segregation aspect, so anathema to everything liberal arts education is supposed to stand for.

The reports for Legal Insurrection by two Hamilton students, Dean Ball and Mary Farrington, highlighted how divided the Hamilton campus has become over the issue of race, and how this segregated program pushed the tensions to the surface.

You also only need to take a look at a Facebook page called Hamilton Secrets to see how people have been venting their racial frustrations anonymously — in all directions.

Yet Hamilton is a school which has diversity programs common on almost every campus.  There are administrators, faculty and staff devoted to diversity, creating a myriad of diversity programming covering virtually every aspect of campus life.

Race relations are supposed to be getting better, not worse, as a result.  But it’s not happening as intended.

I use the term Diversity Industry because what is happening at Hamilton is similar to much of what readers see frequently on Saturday nights in this column — professionals devoted to “diversity” who actually create racial divisions and stoke racial tensions.

At Hamilton, the Days-Massolo Center was opened in April 2012 as a focal point for diversity programming. I’m sure the intentions were honorable.  But if recent events are any indication, results have not followed intentions.

It was Amit Taneja, Director of Diversity & Inclusion and leader of the Days-Massolo Center, who organized the original segregated diversity program that generated so much controversy.

When student Dean Ball objected to the segregated programming, Taneja’s first reaction was to dismiss the concern as being “in the minority.”  What an ironic statement from the Director of Diversity & Inclusion.

Taneja backed down when Hamilton students affiliated with the Alexander Hamilton Institute for the Study of Western Civilization (a group not allowed to locate on campus) announced they would hold a competing racially-integrated program.  But both Taneja and Hamilton President Joan Hinde Stewart have defended the original decision.

Taneja sent an email to the campus stating:

“My intent was to be inclusive but my phrasing suggested otherwise.”

President Stewart backed him up:

“Amit’s goal was very inclusive, but the wording gave rise to misconceptions,” President Joan Hinde Stewart commented to The Spectator.

Sorry, but calling racially-segregated programing “inclusive” and merely the result of a wording problem tells me the Hamilton administration at the highest level is not serious about the seriousness of what happened.

The Hamilton diversity programming page demonstrates how the entire ethos of the programming is to break people down into and then classify them by race and other ethnic factors: 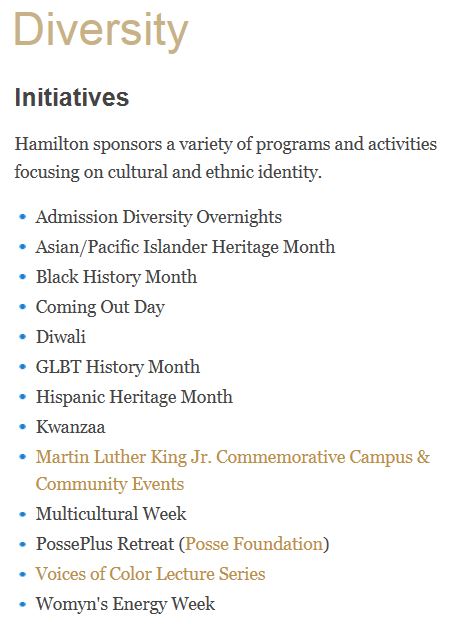 The anonymous commenters at Hamilton Secrets understand what the Hamilton administrators do not: 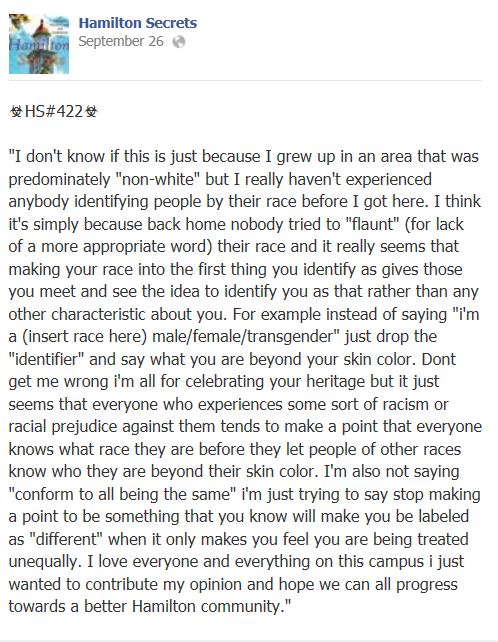 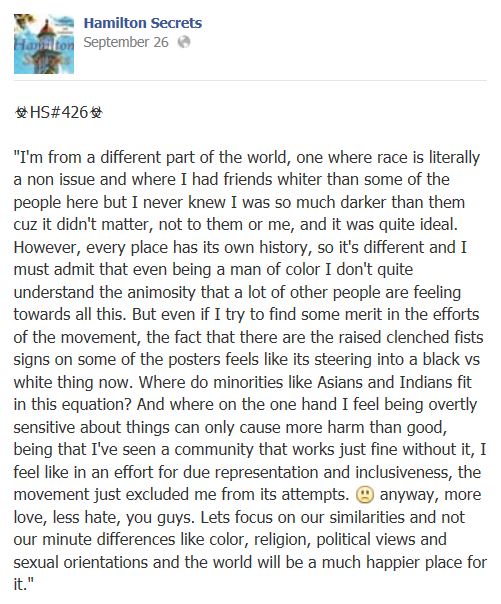 There’s something else going on here.

A commenter on the AHI Facebook page made a point that the diversity programming becomes a self-fulfilling prophecy:

I don’t know Taneja.  I’ll assume that his subjective intentions were good, and that the segregated program was not a deliberate, knowing agitation.

But it was an agitation, nonetheless, as is every program where administrators place students into racial and ethnic boxes and implicitly pit them against each other competing in zero sum games for limited resources.

Hamilton and other schools need to rethink their approach.  They may be making things worse, causing students to feel segregated and fomenting resentments in every direction.

Those resentments are stoked by the very programming which seeks the opposite result, and occasionally they erupt, as is happening at Hamilton.

So as you meet this weekend, Board of Trustees, consider alternatives.  Think outside the box.  Don’t rely on the Diversity Industry.  More money for more staffing for more programs and centers may be counter-productive.

At least consider the possibility.

Maybe, it’s just fading on its own?

Besides, with a certificate in ‘diversity’ … or gender studies … exactly how does that attract jobs after you graduate? One way around this is hoping that no one asks you what you majored in?

The other thing to notice? More than half our population is neither black, nor white. And, for all the asians the pressure is really on because they ace the subjects. Can handle the math. And, so there they get the bars at Harvard, and other schools, just set higher.

But it was an agitation, nonetheless, as is every program where administrators place students into racial and ethnic boxes and implicitly pit them against each other competing in zero sum games for limited resources.

NONE of these overpaid diversity administrators appear to give two hoots in a hurricane for the content of anyone’s character. For shame.

The point of any bureaucracy is to perpetuate a problem, rather than to solve it. Thus, ensuring the need for the bureaucracy, and ensuring it’s own survival.

If a bureaucracy ever did solve a problem, they’d be out of a job, now, wouldn’t they?

The Victim-Industrial Complex. There’s a lot of money in it.

Yep. It’s Pournelle’s Iron Law of Bureaucracy at work– no matter its original goal, any organization will eventually make self-preservation and perpetuation its primary goal.

To whomever fills out a false report of cyber bullying, they should be given 1,000 hours of community service, and prohibited from using a computer for 60 days.

Ack, this should have been in the cyber bullying thread, not the Hamilton one. *facepalm*

OOoohhhhhhhhhhhhhh…My Inner Dramatist is channeling me thru my daily memoir,”You CANNOT Possibly Make This S*** Up!” and my 35-years in film is visualizing what this event would look like IF I WERE IN CHARGE. AAaahhhhhhhhh… (-:

OUT: The Infinite Monkey Theorem.

The theory involving extreme mathematical computations that posits that a monkey randomly hitting a keyboard for an infinite amount of time shall eventually reproduce the complete works of William Shakespeare.

IN: The Infinite Diversity Administrators Theorem.

The theory involving complex equations of impossibility that posits that an infinite number of college diversity administrators working feverishly with infinite resources at their disposal shall achieve greater feelings of racial harmony between at least two undergrad students, long after the monkey has performed his Shakespearean feat, typed the complete works of Mark Twain to boot, and long since passed away.

Exactly! The outcome of the civil rights movement has been to delay integration. The Democrats in particular have been guilty of exploiting differentials and gradients in order to advance their political, economic, and social standing. This is fundamental corruption.

They will understand precisely nothing until they acknowledge and respect individual dignity. Unfortunately, since the civil rights movements progressed to incorporated, for-profit enterprises, this knowledge will not be forthcoming as its publication would destroy their business model.

They should also consider respecting the intrinsic value of human life. History is replete with evidence that treating human life as a commodity will only invite corruption and engender the human and civil rights abuses.

“Every great cause begins as a movement, becomes a business, and eventually degenerates into a racket.” – Eric Hoffer

This is what was predicted to happen when “affirmative action” was first proposed.

And it has become reality.

But those in power, the ones who put “affirmative action” in place, the ones who define what is and is not “politically correct” will never let go…..too much money in it, and too successful in dividing, so they can conquer.

“In order to create a safe space, this program is open to people of color only.”

So, obviously, these racialist campus administrators seek to exclude transparent people only.

Poor grammar and sarcasm aside, what is the implication of ‘create a safe space’ coupled with ‘people of color only?’

Golly. These racialist campus administrators sure do sound like bigots rife with prejudice and ignorance.

Implying that associating with folks not ‘of color’ is unsafe is just demagoguery-as-usual. Had the University an administration of principle, that implication would be challenged forthwith, and the race-hustlers forced to defend it. But it’s an old game now, nearly a hallowed tradition. I suppose it’s not too late to issue that challenge, but it might be a long wait until some articulate soul appears to lead that legal insurrection.

It is documented that some drug abusers suffer from schizophrenia attributed to their habit. These individuals tend to then suffer from a persecution complex as part of their condition. Would it be politically correct for a doctor to diagnose a patient who was a “person of color” as having a persecution complex if the doctor was white and working at Hamilton College? Just asking.