The best customer service experience of my life

The best customer service experience of my life

Dear Roger Ailes — Here’s what you need to do

I had an email exchange last night with a customer service manager for a large tech company, who spontaneously offered this advice (redactions by me):

Again, I’m sorry for any frustration our products may be causing.

On an unrelated note, I think your Megyn Kelly poll on the front page needs another option: Hannity AND O’Reilly out and give Megyn 2-3 hours. She’s great! 😉

Dear Roger Ailes, I hope you are getting the message: You are correct to shake up the line up.

Here’s what Legal Insurrection readers want you to do: Move Hannity to 10, Greta to 7, and Shep Smith Out of the 7 p.m. slot. 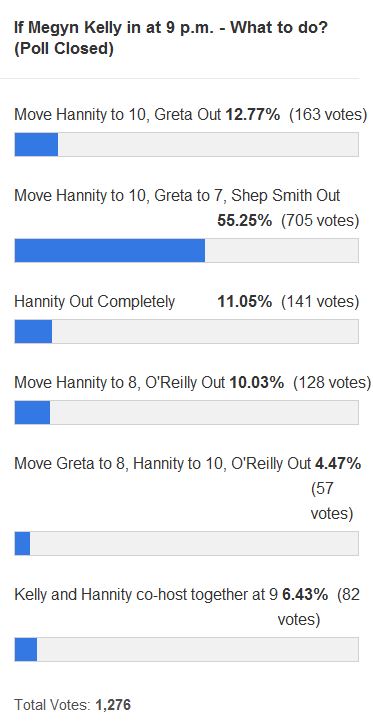 Just a thought: Shep is a good newscaster, probably would be a so-so commentator, for me at least, given his apparent political predilections. Yet, if FNC wants to keep on being a newscaster, it needs to have a strong news reporting crew, including the on-air announcer, and that means people like Shep, who is a fairly balanced announcer.

Otherwise, FNC becomes the Conservative version of MSNBC / CNN and I would vote against that any day of the week.

Doug, I don’t know how old you are but it’s apparent that you’ve not seen balanced reporting in so long, that you think FOX News leans right when in reality, its the closest thing to what news reporting used to be….fair.

For a “a strong news reporting crew” watch Special Report @SpecialReport at 6pm Eastern. The prime time slots are for entertainment/opinion based journalism. To that end, add Fred Thompson @fredthompson as a frequent guest, plus James Woods @RealJamesWoods, P.J. O’Rourke @PJORourke and Bill Whittle @BillWhittle.
“Why not the best?” (Jimmy’s only contribution of value prior to retirement)

How about a category for: There are so many commercials that I don’t watch TV news any more so I could care less about which overpaid “teleprompter reader” is in which time slot.

gs425: Thanks for checking in and announcing you’ve accepted the job of “Troll” and proclaiming your great and wonderful analytical skills.

As for being fair, yes, FNC is generally that on its news casts, never pretends to be so, generally speaking, on its commentary shows!

But, alas, your knowledge of American newscasting is woefully lacking. Think back to 1968, and Uncle Valter’s announcement during Tet that the USA had lost the struggle in Vietnam. Also, consider Peter Arnett’s famous statement back in that era about villages, which a well-known feminist later plagiarized and twisted into something different.

That was “fair” in those good ol days? Grow up and read your tomes!

One last point, in holding with my general view, see you on the funny pages but not here!

Doug, thanks for labeling me a troll for merely pointing out the obvious.

And FORGAWDSAKES get rid of The Five and all similar formats – the inane Beavis & Butthead rountines punctuated by occasional political commentary. I want news & analysis like The Grapevine’s Brit Hume. I don’t care about how witty some pretty boy beta-male can be.

I turn on reruns of Big Bang Theory rather than watch Shep, and I think I’ve seen them all.

Haven’t watched Hannity in years. Colmes was insufferably dishonest, and frankly Hannity isn’t smart enough to run a show on his own. He’s conservative enough, just not smart enough.

O’Reilly is too enamoured of his own voice to stand for long. Greta can be great but she can also get obsessed with things and run them into the ground. But I much prefer her to Paula Zahn, an empty pantsuit if I every saw one, and I’ve seen Hillary.

The Special Report team is as good as it gets in the business, and while I don’t need the evening summary of what I’ve seen online during the day, I try not to miss the panel at the end.

Best analysis of the current line up. Kudos to you!

I like Gretta – all the rest can go into mothballs.

Better yet, the entire network should transform into the Fox Nostalgic Network, and show old films and TV shows from the 50s to the early 80s. I suggest FNN starts with reruns of the entire Kojak series, Telly’s bald head on the screen will be twice as soothing as the annoying daily diatribes from the regulars “Fox & Friends” and “The Five” – I’d watch a few more episodes of the latter show if it included ritual head shaving of that shrilly annoying Andrea Tantaros to imitate Theo’s shiny pate (the only more annoying voice on cable is that shrike Jane Velez-Mitchell who sounds like her nipple is permanently caught in an electric can opener).

And gs425 — if you think FOX’s news coverage is as ‘fair’ and objective as traditional news shows were during the Cronkite and Brokow era you’re in some kind of nostalgic brain lock. I watch Shepard Smith’s show and his reading of the news is filled with more facial editorializing expressions and body language shifts then you see in silent movie dramas.

And claiming there’s an objective difference between actual news and commentary shows on FOX is deceptive. It all bleeds together: the network CALLS itself Fox News, not Fox Commentary. The internet link is to foxNews.com, not foxOpinion.com And it shouldn’t be NEWS to anyone that everything you see on it is slanted RIGHT. So if you’re on the right, you like it. And if like me, you’re on the right sometimes, but other times not, you watch and listen with skepticism until you see where they’re coming from.

Speaking of seeing where they’re coming from, I will admit FOX has some really hot looking long-legged newswomen who can certainly accentuate a headline or two with those always visible lower limbs. If there’s any political slant left or right there, I’m willing to overlook it. And if you don’t mind stories and commentary from airheads with legs, it certainly takes the edge off bad news.

My kingdom for a journalist…..

I have never understood O’Reilly’s appeal? He is a great mystery writer, but a bought and paid for commentator. Also don’t care for Shep Smith. Move them out and put in real news people; instead of entertainment plus.

My TV crapped out in 2009 and I haven’t bothered to replace it.

Haven’t missed it, either.