History started with Obama: Crowd taunts and mocks President, what have we become America?

There is full blown Democratic furor over Tuffy the Rodeo Clown. The incident is being portrayed as racially motivated, and the repurcussions have been severe.

Tuffy (Facebook support page here) has been fired and banned for life from the Missouri State Fair, the announcer has resigned, the rodeo association is requiring sensitivity training, and politicians like Claire McCaskill are trying to cash in politically.

A little history is in order. The vitriol and mockery unleashed at George W. Bush is well documented, and George H.W. Bush received precisely the same rodeo treatment (even down to the broom up the rear end).

Presidential disrespect went around and now comes around:

What does it say about America in 2013 that a Rodeo Clown is more politically mature than the prevailing political and media establishments? Via NPR:

Tuffy Gessling, the rodeo clown at the center of the controversy over the skit at the Missouri State Fair in which a man wearing a President Obama mask was mocked, says “nothing racist was ever implied.”

“Comedians all over the country have used political figures to make fun of current events, it’s nothing new,” Gessling has told digitalBURG, a student-run news service from the University of Central Missouri. “I never tried to be a racist or anything like that. I love all people no matter their background. I live to make people laugh. When TV comedians are doing it every day, Rush Limbaugh is doing it every day, people on Facebook are doing it every day 10 times more than me. I was just trying to make light of the situation, that’s it.” 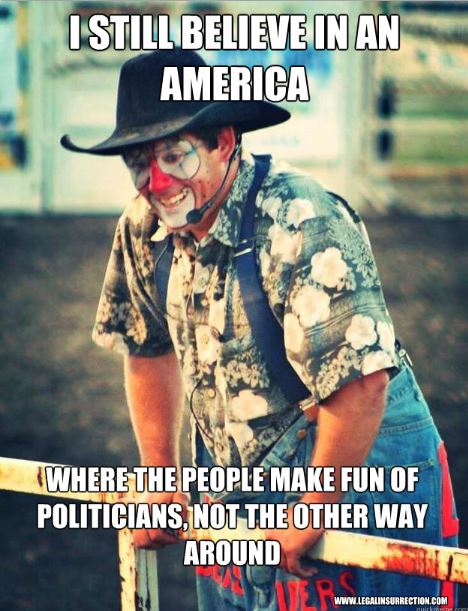 Plato got it right. Anarchy follows democracy. Welcome to the post-modern world.

Ok, so the Democratic establishment is doing the Lady Elephant routine from Dumbo (where the lady elephants are confronted by the mouse). It is good to call them on it.

This is faux outrage, and the real outrage is that these perverts have deprived a person of property in a cynical effort to further their own political agendas.

What does it say about America in 2013 that a Rodeo Clown is more politically mature than the prevailing political and media establishments?

It tells the truth. Rodeo Clowns are working stiffs, just like a lot of other working people, but a bit grittier. It takes strength and guts to be a
Rodeo Clown. I’ve known a few and liked every one of them.

If Tuffy Gessling runs for President against any liberal or RINO piece of work, I will vote for Gessling. I know he knows what a days work is all about and what it means to make decisions, some of them on-the-spot, for another’s benefit not his own. That would be a welcome change in Washington DC in my not humble one bit opinion.

Seems democrats have outed themselves as the hypocritical asses they are, and in a big way.

On the heels of the Zimmerman witch hunt for a racist that wasn’t and everyone now knows it, this #WarOnTuffyTheClown is a political backfire.

Tea party groups across America need to make sure that from now on, at every public appearance by Obama, somewhere in the crowd an Obama-masked rodeo clown is quietly standing by and watching.

Where are Missouri’s Republicans?

They should be actively working against the Missouri State Fair until it apologizes and reinstates to Tuffy (including a guarantee to book him in 2014) and the Rodeo Association until it conducts a 1st Amendment sensitivity session.

MO has a D governor – he should be pressed on this as well, but it looks like a better start might be with the Speaker of the House.

replace (at) with @ to email him obviously.

It is a particularly perverse form of racism to deny people the ability to be lampooned because of their race.

And that is what is at work here. Obama cannot be treated as every past president in our history has, and only because of his identification with his black half.

Of course, he counts on…and exploits…this racism of the Collective. So does Holder, as did Jackson, as do and have most of the Obami. It is used both as a sword and shield, and it is as despicable as any form of racial discrimination ever.

It actually strips people of their humanity, which always includes the “right” to be mocked by your opponents. It also…as long as it exists…disqualifies any minority from executive office.

HAS ANYONE LOST THEIR JOB OVER RESIGNED OVER BENGHAZI?

Get your priorities in order, Mister!

This may seem insignificant at first glance.

It starts with the clowns … and then it spreads to bloggers … pretty soon all hell breaks loose and the Professor is mocking Meghan McCain over her breasts. (If you haven’t been here a while, that might not make sense.)

We can’t have people making fun of our Dear Leader.

what difference does it make now?

What…. next they are going to ban the back end of horses from rodeos because some might associate them with the President?

First the Bozos came for the clowns,

and I didn’t speak out, because I wasn’t a clown.

LukeHandCool (who admits that last part is debatable)

I was under the impression that political satire was protected by “Free Speech”?

I went to rodeos as a kid. One or more of the clowns always did appear as some political figure. Over 25 years ago …

It an old tradition.

The Dems have jumped the Clown.

Except when the issue is racism in America …

That’s when it is forever 1963, and Bull Connor is everywhere …

LHC (who notices that Mr. Connor, when invoked, is always implied to be a Republican. He wasn’t. That part they changed. Oh, and now they have him in a mask at a rodeo.)

A kid praying to The One, and he’s praised.

A rodeo clown mocking The One, and he loses his job.

This is not an administration. This is an Emperor cult.

The One is America’s Nero.

How exactly do the re-education camps, er, “sensitivity training” camps define “shall not be infringed”?

how can a public funded (tax payer) entity ban speech and speaker for life?

I suspect the hundreds of lawyers likely trying to contact the rodeo clown have an answer.

Anyone know if Capital Steps is still in production? Those guys were ruthless!

The progressive movement pilots couldn’t care less about Obama getting mocked. This is a manufactured crisis set up for exploitation. The goal is intimidation of any would-be dissenter.

Progressive liberalism and the 1st Amendment are mutually exclusive.

So, it occurs to me that instead of comparing Gessling’s mocking of Obama to that of past presidents – we should be comparing it to Obama’s mocking of children with disabilities when he made a joke about bowling and The Special Olympics.

Remind me how Obama lost his job and livelihood and all future Presidents were sent to sensitivity training for that bit of comedy that was intended to emphasize a demeaning stereotype.