[WAJ intro: Laurel Conrad is a Cornell University Senior. This is her first post at Legal Insurrection. Laurel is President of the conservative Cornell Review, and the Cornell chapter of the Network of Enlightened Women. Laurel interned this summer at The Daily Caller. We look forward to more posts from Laurel this academic year. Follow her on Twitter.]

However, the two students who perpetrated the racist acts later claimed that it was a “joke” in order to “troll” the campus, according to the police report.  Notably, the lead perpetrator was a liberal student with a history of Obama activism in high school and college.

Below, check out these hilarious 15 liberals who just can’t handle the truth!

And yet on Twitter, the student described himself as an “atheist/pacifist/environmentalist/libertarian socialist/consequentialist.” Hmm, something just doesn’t add up here….

You can’t argue with this kind of critical reasoning. 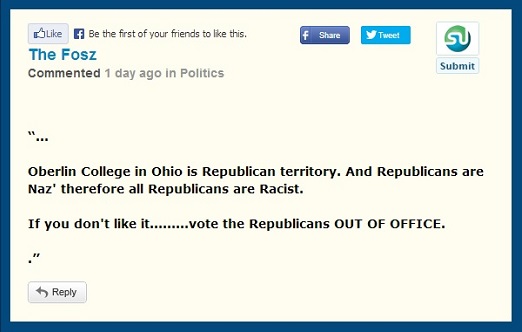 Derekw007 demonstrates the grace and eloquence of a liberal commentator.

Something tells me that “previously organized a voter registration for Obama” is not ideal GOP presidential candidate criteria. This may be just a hunch, though.

8. Only conservatives are racist.

He is actually a liberal, based on his political affiliation.

“Hey mom and dad, you’re really going to laugh about this one….”

I think what “PMVB” actually meant to say was, “The student must be training to be a  Democrat politician with his ‘ It’s only a joke “ thing.’”

12. The next Rush Limbaugh.

Yes, the student and Limbaugh are almost exactly alike! They would only disagree on basically every issue, ever!

“China2012’s” brilliant, and yet totally incorrect response to the comment, “Another future liberal leader at work!”

Good point; all good College Democrats aspire to work for the Heritage Foundation.

That sounds exactly where the founder and president of the Ithaca High School for Obama club would get his material. 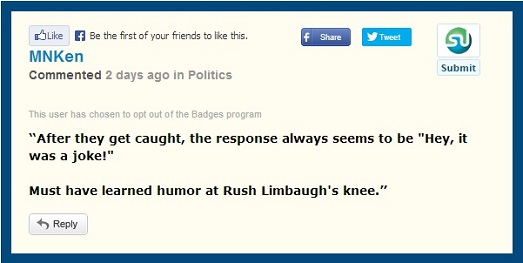 The comments above reveal the general cluelessness of the liberal commenters. They assumed that the hoaxers must be conservative, because racism was involved. The real “joke” was on them, because in the end, one of the perpetrators was a liberal, Obama supporting activist!

Like when you tell liberals that Democratic Rhode Island passed Photo ID based on Indiana’s law. Or that in contrast to cutting back some on early voting like North Carolina, 18 states, mostly in the Democratic northeast don’t have early voting at all. Among other “non-liberal” policies.

They are just protecting themselves from all the nausea, disorientation, and vertigo.

Can we do away with the term “liberal”, and use the term “insane socialist” instead? “Liberal” has the connotation of being generous and giving, when we all know they are all about taking and re-distributing amongst their favored groups.

Use “insane socialist” instead. Why add the insane part? Hmmm……I’ll leave that one up to the reader to figure out, though one could easily substitute or even pre-fix “Race-baiting” to the aforementioned term.

In any case, to use “Socialist” is a much more accurate term. Otherwise it is a stain on classical liberalism, which today is referred to as libertarianism.

“Leftism” is a more encompassing term. It doesn’t have the gentle sound of “socialism,” or prompt the question “isn’t it good to be social?” And it has an etymological connection with “sinister,” which is appropriate.

Except that I’m left-handed. And seeing as how left handed people are greater than anyone else, does that make me a “Leftist?” hehe.

I think not. Nor do I really believe left handed people are inherently better. But it was fun to type it out 🙂

Thumbed up – with my left hand.

And no jokes about what my right hand is doing. I’m looking at YOU Luke, and YOU Anchovy, and YOU Rags.

In Hebrew, “Smali” is left-handed, and “Smolani” is Leftist. (Strangely, rightist and right-handed are the same.)

I encourage the use of “Left-Puritan.”

The PuffHos are particulary worthless and stupid when it comes to dealing with reality. Stalin would have found them useful in his penal battalions during the second world war.

What the Commie bastards are doing is framing the narrative so that Consvatives are blamed for Commie racial transgressions. That’s what you need to clue in to. They know who he is, they know what Oberlin is. They also know that they need to pin every one of their racist acts on Conservatives.

So, don’t let them get away with the lie. Don’t get caught up thinking they’re deceiving themselves. They know they are not. They are acting with deliberate intent to shape the Democrat plantation narrative for the continued future.

LOL: @LaurelRConrad Smacks Liberal HuffPo Commenters With the Truth : The Other McCain | August 28, 2013 at 9:47 pm

Even though it was exposed as a complete hoax (no fascist right-wing rephuglicans were involved in any way), the Obamabot achieved his goal: Republicans and conservatives are still held responsible, and will continue to be denounced, and no amount evidence will disabuse these fools of this notion. Invincible Ignorance is what they instill in the students at Oberlin, apparently.

All the continual references to Rush Limbaugh.
I bet most of these people only know of him what they read on Huffpo or hear on MSNBC.
How many of them have ever listened to more than a short sound bite from his show?
How many comment having never listened to his show at all?

How many of them have ever listened to more than a short sound bite from his show?

Taken out of context, no less.

These people were probably not lying. There are huge numbers of people that will make assumptions based on their prejudices, and blather them as fact, in public. THese are the people that call Sarah Palin stupid, and then quote Tina Fey. We can, and should, stop them in their tracks, and this article shows how it is done. Well done.

Others, like Rachel Maddow, lie outright, and purposefully. That awful woman lied about the sensible goals of education reform backed by –really– both Newt Gingrich and Al Sharpton, and then all the commentary about that awful Newt Gingrich, which buried the actual videos, was all based on Rachel Maddow’s lies.

We can’t have a real political debate on any topic, if people are free to outright lie about other people’s positions. Catch ’em and call ’em.

Learn to cut and paste Twitter posts in your content instead of JPG images / screen grabs. I makes your content much more interactive. Everyone else does this.

It’s harder for critics to claim screen grabs were “doctored” than just “cut-n-paste” quoting them. Especially if the tweets end up deleted.

These are not tweets, they are comments at HuffPo.

What’s new about this? These are the same people that supported Obama in 2012 because they thought he’d done such a great job 2008-2012. Being ignorant is as requirement for being on the Left as is being racist.

Just shows that the leftists consider the US their enemy.

Congratulations on your first post and getting an Instalanche with it!

Well that was fun! Welcome, Ms Conrad, I do like your work!

On the other side of the continent (Left Coast) the evening news on 8/28/13 reports “racist graffiti” on buildings at the UC-Davis campus. The chief of the campus police decried the use of the “hurtful speech” of these writings. No mention of the similar incident at Oberlin, let alone that it was a hoax.

This stuff may be from somebody’s playbook although the UC-Davis incident is still under investigation and no perpetrators identified. “The police are baffled, but arrests are eminent.”