A Twitter account belonging to ITV News, which was one of the first outlets to broadcast video of one of the killers in Wednesday’s grisly London terror attack, was compromised Friday by the pro-Assad hackers.

The @itvlondon account sent out a series of tweets while under the Syrian Electronic Army’s control, which were later deleted once the outlet regained control of the account. 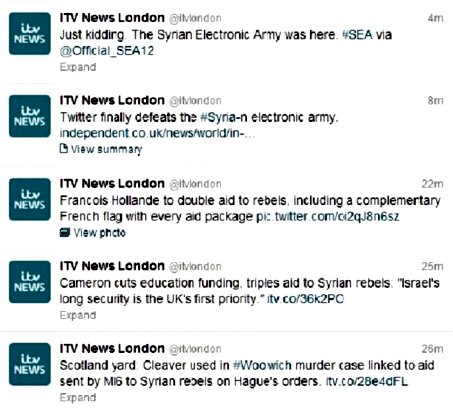 International Business Times captured some of those tweets.

In other tweets the group claimed rebels were routing from the decisive battle for the city of Qusair, off the Lebanese border and that French president Hollande was sending “complementary French flags” as part of aids to Syrian rebels. A photo of a white flag was attached.

The hacking was claimed by the SEA that signed its stunt in a last message.

“Just kidding. The Syrian Electronic Army was here,” the group tweeted. The messages were later deleted by ITV.

Given the amount of attention the London terror attack has garnered for ITV due to the outlet’s exclusive coverage, it’s not surprising that the Syrian Electronic Army would target it.  The group of hackers is known for being media savvy and selecting targets that will maximize their public exposure.

The Syrian Electronic Army has been targeting media outlets for more than a year.  A series of cyberattacks has gained them more attention in recent weeks, with targets that included the Financial Times, the Guardian, the Associated Press and even E!Online and The Onion, among others.

The Associated Press incident especially raised many eyebrows, as the fake tweets that claimed a bombing at the White House caused the Dow Jones industrial average to temporarily plummet.

But as we’ve noted in a post entitled Hacking the News: Information Warfare in the Age of Twitter here at Legal Insurrection, some of the group’s earlier attacks in 2012 – especially that on the Al-Arabiya news network – could have literally caused chaos on the ground, had the fake news in that case about an explosion and the resignation of the Gulf Emirates Prime Minister and replacement by the country’s heir-apparent not been quickly and very publicly debunked by an astute blogger.

These are hackers who support the actions of the Syrian government.  Some industry analysts suspect they may actually be employed by the government itself.  They benefit from chaos and bank on the apathy of readers who likely wouldn’t bother to check facts, not to mention on harming the credibility of legitimate news outlets.

Sometimes propaganda and disinformation – when strategically crafted and disseminated – can be just as dangerous as physical weapons.  And the potential for the Syrian Electronic Army to use the media to cause significant damage is more real than many may realize.

We all have to be careful to think things through and not get pushed by media hysteria. These kinds of hacker attacks are attention-getting now, but people will adjust.
LI does a good job of performing “due diligence” on news events, imo.

Regarding the London attack, is it really true that the Brit Prime Minister called on armed forces personnel to avoid wearing their uniforms in public?
Ugh.

Re the London attack: http://www.telegraph.co.uk/news/uknews/crime/10075476/Woolwich-attack-troops-advised-not-to-wear-uniform-outside-bases.html

I find it hard to believe that there is enough technical sophistication within Syria itself for this to not be thwarted easily. So it begs the question, who is helping. China? Russia? Being consistent in hacking requires steady diligence as methods on past attacks can be resisted. Unless, of course, they just easily figured out someone’s password at ITV.

And Facebook is for the simple-minded. Look up “self-submitted dossier” sometime, you trusting fools.

ITV’s spokesman said it was accessed by way of a phishing email, which is how SEA also got into several other accounts. http://in.reuters.com/article/2013/05/24/itv-news-hackers-idINDEE94N0CT20130524