Why E!Online? The latest hacking incident on Twitter could be used to spread malicious code in links

The pro-Assad group of hackers known as the Syrian Electronic Army has hijacked another Twitter account, this time that of entertainment news outlet, E! Online.  The account was hacked on Saturday afternoon and subsequently posted several false tweets about a few celebrities, most specifically Justin Bieber.

One tweet read, “Exclusive: Justin Bieber to E!Online: I’m a gay,” followed by a shortlink.  Another read, “Exclusive: Selena Gomez tells E! she will fully supporting Justin in his coming out” [sic], also followed by a shortlink.  (Selena Gomez was Bieber’s girlfriend up until recently).  And another made reference to Angelina Jolie blaming Jordan for “the Syrian refugees’ atrocious conditions.”

Some of the tweets were re-tweeted numerous times before being deleted.  A screen capture was posted by Business Insider. 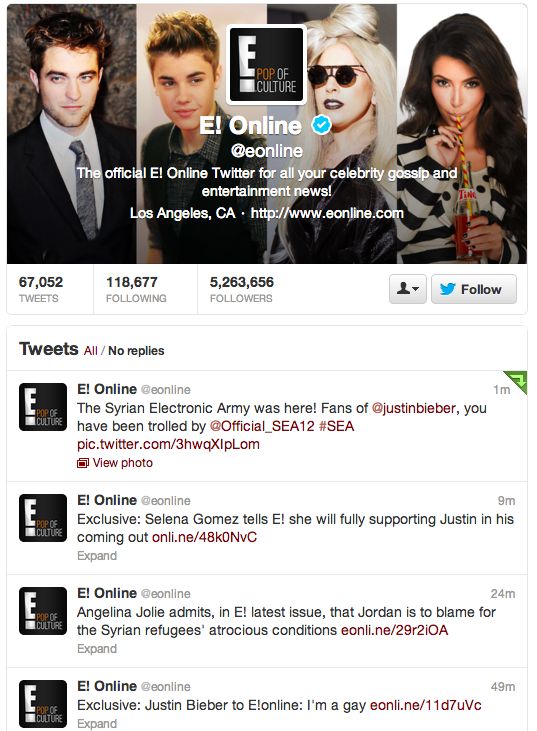 This is the latest in a string of attacks by the Syrian Electronic Army, which has been targeting social media accounts for more than a year.  Most notably, the same hacker(s) recently claimed responsibility for the hoax Associated Press tweet that caused the stock market to temporarily plummet.

Thus far, the Syrian Electronic Army’s attacks have been designed to garner media attention to their pro-Assad messaging, as the conflict in Syria between government and rebel forces rages on.  However, there has been growing concern for some time that their intentions may be more sinister.

As Mashable has noted, it is highly possible that the shortlinks included in the E!Online tweets Saturday may have directed those clicking on the links to malware or damaging websites.  Users were urged not to click on the links.

Redirecting users to malicious locations by way of what are disguised to look like legitimate links is a common tactic of some hackers.  Only days ago, another hacker(s) employed a similar tactic on a Department of Labor website that was used to launch malicious code on the machines of unsuspecting site visitors.

If it turns out that the links included in the hacked E!Online tweets did in fact redirect users to malicious sites, it’s a rather strategic move.  While E!Online, and the subject of a celebrity like Justin Bieber, might initially seem a ludicrous target for a hacker, it’s an enticing one if you’re a hacker looking to maximize the number of clicks – and in turn, maximize the damage.

If in the end the links turn out to be harmless, it’s not unreasonable to wonder if the stunt was merely a test run for such a future attack.

As I addressed in a previous post, Hacking the News: Information Warfare in the Age of Twitter, the consequences of attacks on legitimate news (and now entertainment news) outlets are far more serious than simply absorbing a few false tweets.

Information warfare has become a legitimate danger in spreading propaganda in this day and age, especially in light of various conflicts around the world. […]

Twitter is fast becoming the weapon of choice in such cyberattacks.  As we’ve seen, hackers succeeded in temporarily plunging the stock market with one false tweet from a reputable news outlet.  Overseas in Qatar, they very well could have succeeded in creating chaos and panic. What lies on the horizon?

In the wake of all the recent cyberattacks on news organizations, Twitter has warned media accounts that they will continue to be targets of hackers, and has advised them to take all appropriate steps to further secure their Twitter accounts.

Mandy – if this was some Israeli pranksters they would be kings of humour.

I thought it was very funny no matter who did it .

I’m sure it will all be funny to you, right up to the point when somebody does something to you. Meanwhile, the adults in the room can take note that children are at play, and that childish play can result in damage.

Oh & Qatar? That would be the home of AlJezeera. Too funny.

This is very dangerous. Low-information voters will fall for this – and could inadvertently spread such viruses or worms/malware to wherever else they are connected. Who do they follow? Who/what sites do they visit often? Do they also go to government sites to get benefits? Insurance sites? Medicare/Medicaid? Social Security?

Taking down entitlements or another major government site would be HUGE.

It could indeed be devastating.

This cyber threat, whether via Twitter, Facebook, or other social media, is not new, and was predicted under Bush/Cheney. My question: what is this administration doing about it?

With Janet Napolitano at the helm, and O as the CinC – especially in light of the Boston Marathon bombing fiasco – my guess is NOTHING.

I commented shortly after Stuxnet became public knowledge that we had better be prepared for a counter cyber attack. Iran has now had almost three years to reverse engineer Stuxnet, and we know Syria is a satellite state of Iran.

If Syria/Iran launched a cyber attack against U.S. interests that was successfully thwarted, would we even know? I’m not sure. I worry the government and the business community may try to suppress the info to keep the public from panicking.