Another news organization has fallen victim to the group of hackers known as the Syrian Electronic Army. 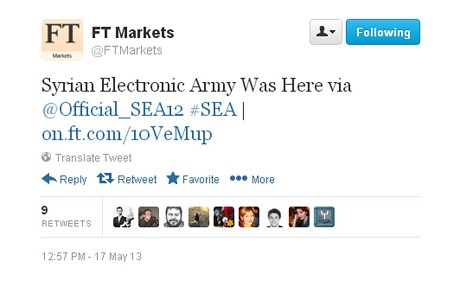 The Financial Times was hacked Friday, according to a notice posted by the outlet.

The Financial Times has become the latest news outlet to be hacked by supporters of the Syrian president Bashar al-Assad, following a phishing attack on the company’s email accounts.

“We have now locked those accounts and are grateful for Twitter’s help on this,” said Robert Shrimsley, the managing editor of FT.com.

This is merely the latest in a string of attacks from the Syrian Electronic Army, which has made news outlets a primary target in its PR campaign to spread pro-Assad propaganda and attempt to intimidate those who are critical of the Syrian government as civil war rages on in the region.

The most notable incident occurred last month when the same group of hackers claimed responsibility for utilizing phishing methods to gain access to the Twitter account of the Associated Press.  What followed was a tweet that there had been two explosions at the White House and that President Barack Obama was injured.  The false information temporarily plunged the Dow Jones industrial average.

Other attacks by the same group in recent weeks include that on The Guardian, and on E!Online.  The latter was a more strategic strike than many may realize, clearly designed to leverage the cultural popularity of the account to maximize exposure to a broad audience.  It also highlighted the dangers that social media poses in such attacks, and the potential for hackers to spread malicious code via links in a viral manner.

The Syrian Electronic Army has been conducting such attacks for well over a year.

In a post titled Hacking the News: Information Warfare in the Age of Twitter, Legal Insurrection outlined many of the prior attacks and broader concerns about the actions of the Syrian Electronic Army and other hackers.  While the individual incidents may seem relatively benign to some, the collective damage that could be done – especially by way of hijacking the news with false information – has the potential to be far greater and have far-reaching impacts.  It is a trend that deserves continued vigilance in monitoring.

I am concerned about SEA hijacking the news to spread false information.

These guys have great taste.

The FT is a stinker . Eonline sux. TheGuardian – bwahhahhaa.